Isabel Larios was among thousands of commuters stuck on the 105 Freeway in Hawthorne early Friday after a deadly collision between a tanker truck and another vehicle shut down the road in both directions for several hours.

Frustrated by the gridlock, the food truck operator got up to make herself some coffee - it was 6 a.m., after all. She stepped outside and opened the compartment with the coffeemaker.

Some motorists took that as a sign she was open for business, asking, "Will you serve us coffee? Breakfast?"

Larios turned to her cook: "Should I do it?"

"Do it!" the cook responded. "We're not moving anyway."

It wasn't long before motorists began getting out of their cars and placing their orders for burritos, sandwiches and coffee from Larios' food truck, parked in the carpool lane.

Larios hasn't counted her money yet, but she estimated that she sold dozens of orders of coffee and most of her eggs.

Customers were amused at her good fortune, with one person shouting, "You're making good business!"

Some of the clientele knew her, she said. They were headed in the same direction, Los Angeles International Airport, where Larios normally serves construction crews working on the airport tunnel.

She lamented that the airport crews might miss their morning coffee.

"I never thought something like this would happen," said Larios, who has operated the food truck since 1986.

By 8 a.m., the eastbound lanes of the 105 Freeway had been reopened, and the California Highway Patrol had cleared much of the area around the crash site, although westbound lanes at Prairie Avenue remained closed. Service on the Metro Green Line was also disrupted.

The crash occurred about 5:15 a.m. when a Range Rover and tanker truck collided near Prairie Avenue, according to the CHP. The tanker burst into flames and sent a fireball shooting across the freeway. Two people were killed, according to the Los Angeles Fire Department. 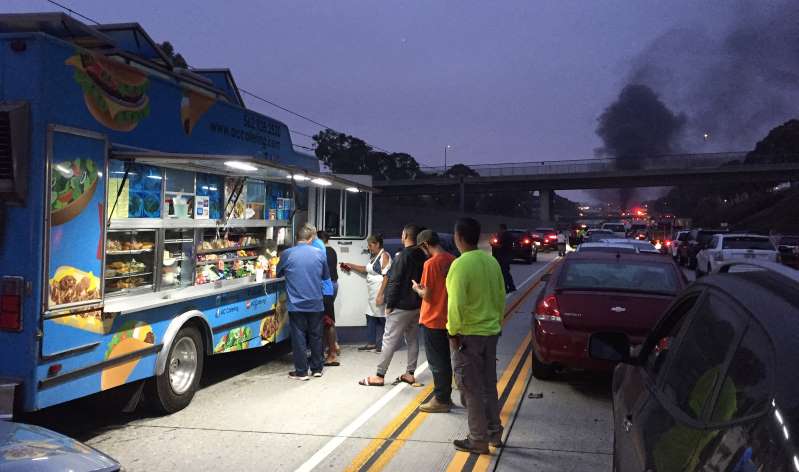