© File Photo File Photo By David Strege, BNQT An elderly woman got her wish to "put my feet in the water one more time...

An elderly woman got her wish to "put my feet in the water one more time" at Pensacola Beach in Florida, thanks to a Good Samaritan who heeded her call and a lifeguard who helped make it happen.

Shelia Hall Templeton posted the heartwarming story on the Pensacola Beach Lifeguards Facebook page with photos showing the elderly woman, her husband and lifeguard Alex Hernandez walking toward and stepping into the water.

"The man told me they have come to Pensacola beach for the past three years but have not been able to move off the walkway onto the sand," Templeton wrote. "The elderly lady then told me that she first visited Pensacola beach many, many years ago on her high school senior trip and she has NEVER had her feet back in the gulf water since that senior trip.

"She said 'all I want is to put my feet in the water one more time.' As she was telling me this, she began to break down and cry. I told her not to cry, that we would get her out to the water somehow."

A lifeguard came by to put something into the trash can so Templeton asked him if he could help get her to the water. It was Hernandez, and he said yes.

[post_ads]Hernandez alerted his partner in the lifeguard stand what he was doing and returned to offer his arm to the elderly woman. The woman's husband took the other arm.

"They slowly made their way to the water," Templeton continued. "The lifeguard stayed right by her side the whole time. When she got tired, she sat down on the seat of her walker [which Hernandez carried along]. The young man still stood with her. He never left her side. When she got ready, he helped her [again]."

Eventually they reached the water where the waves lapped up around their ankles.

Templeton ended by writing, "I'm telling my encounter today to say this: Always be kind, always offer a helping hand, you never know how you will bless/touch someone from your kindness."

After an outpouring of praise on Facebook, Templeton-a 40-year-old disabled nurse and Crohn's Disease Survivor-wrote later, "If not for Alex the lifeguard, I would not have been able to help make her wish to come true. Please be sure to thank Alex."

Templeton told BNQT that neither she nor Hernandez got the couple's last name.

"I pray this reaches the elderly couple and touches their heart as well as it has for myself and Alex Hernandez the lifeguard," she told BNQT. 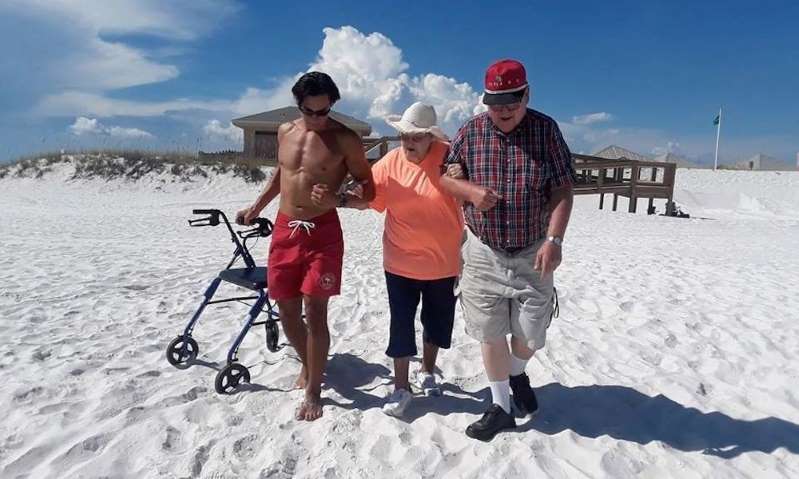