Growing up in a tight-knit Central Valley household boasting five sons, Luis and Hector Vargas regularly took things on as a family.

Only one year apart, they went to the same college to study for the same degree and worked exhaustively to help pay for school — one milking cows at a dairy farm and the other picking fruit in the fields around their hometown of Visalia.

Now, they're about to enter a whole new endeavor together: patrolling the streets of San Jose.

The Vargas brothers were sworn in as officers with the San Jose Police Department. And their youngest brother, Brian, is following their footsteps, aiming to graduate from the next police academy in December.

So what is it exactly that keeps them so family-oriented?

"We're going to go farther if we do it together," Luis, 26, said recently after a day of crisis-intervention training at the South San Jose police substation. "We're always helping each other out."

Recruitment Officer Christian Camarillo met the Vargas brothers when they first tested with the department and mentored them as they made their way through the six-month academy.

Their background and upbringing reminded Camarillo of his experience growing up in the working-class Santee neighborhood in East San Jose, where he evaded gang influences and made the most of his family's modest means before eventually finding his calling in law enforcement.

"Everything they did, I did it. And I knew how important it was to have a support system," Camarillo said. "I felt the need to take them under my wing. I'm proud of them."

Hector got the law-enforcement bug first, inspired by police ride-alongs with officers in Visalia. Luis' interests were initially more eclectic, and he considered kinesiology and other medical pursuits while both attended Fresno State.

Luis, 26, and Hector, 25, worked steadily to support themselves while they both studied toward criminology degrees. There was a stint at McDonald's at one point. And eventually, they joined their father at a local dairy. Luis took to it more handily, and would spend five years as a milker. In a way, he said, it prepared him for the police life he is about to enter, particularly when it comes to working long hours during different times of the day. Rookie officers typically start out on graveyard shifts.

"It taught me work ethic, teamwork, discipline," he said. "Sometimes a (milking) shift would go until 3 a.m." To offset student loans, Hector did a brief stint at the dairy then began picking grapes, olives and nectarines in the fields.

All the while, the brothers would share thoughts about what they would like to do next. Hector knew he wanted to pursue police work, and nudged Luis into taking the three-hour drive to San Jose with him to take one of the initial entry exams.

Luis gently rebuffed that account: "It was a push. But a lot of people need that."

They both had criminology degrees, but were still skittish about how they might perform. They set their expectations low, and then surprised themselves.

"We thought we were going to fail," Luis said. "But we placed pretty good. And it was on to the next step."

The brothers eventually were accepted into the academy. But that might have been the easy part. With a month before their start time, they suddenly had to navigate the notorious housing gauntlet of the Bay Area. After furious searching for an affordable apartment, they found a place in San Jose just days before their first day at the academy.

Like they had their whole lives, they pulled each other up as they made their way through the intense academic and physical trials of the police academy. It took some time for them to get acclimated.

"It felt like everyone else was so far ahead of us," Luis said. "But a few months in, things started clicking."

There were tough days, of course. At the same time, they found comfort in having a literal partner in crime (fighting) as it helped ease the isolation that came from suddenly living 200 miles away from the only place they had called home.

"There were plenty of times where it was like, 'This is pretty hard,' " Hector said. "It was a huge relief having my brother helping me get through it."

Now that they have their badges, the Vargas brothers are taking quick stock before they hit the streets for the first time.

"The real deal is coming next," Luis said.

They're also reflecting on how they got here. Hector credited his parents, Mexican immigrants with dreams of steady work and the chance for their children to not only get good jobs, but also find work with a grander purpose.

"Where we came from, money was tight. We made the most of what we had. And our mom and dad knew the importance of opening things up for different opportunities for us," Luis said. "We want to make them proud."

Camarillo said he wanted them to share their story in the same spirit.

"Somewhere out there, young men and women who haven't quite found their way, they're busing tables, washing cars, and they have the potential to be great," he said. "If I did it and they did it, it's possible." 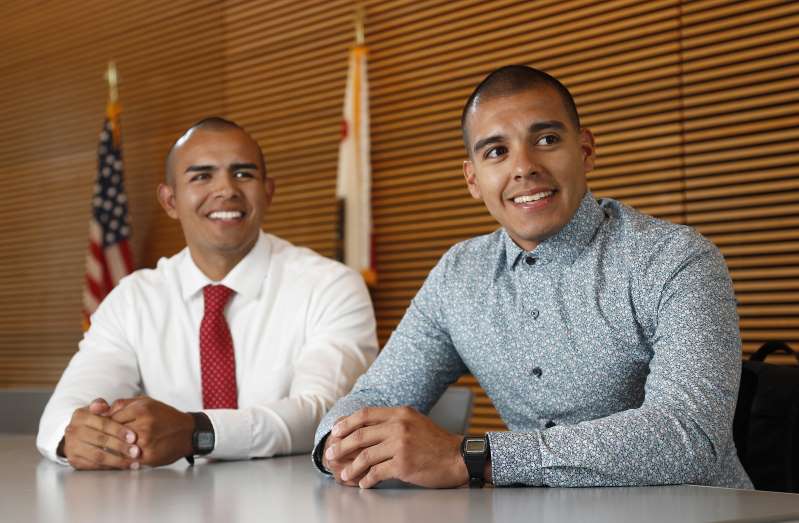