By Travis Fedschun, FOX News For one bride in New Jersey, "something blue" became the uniforms of officers who helped her int... 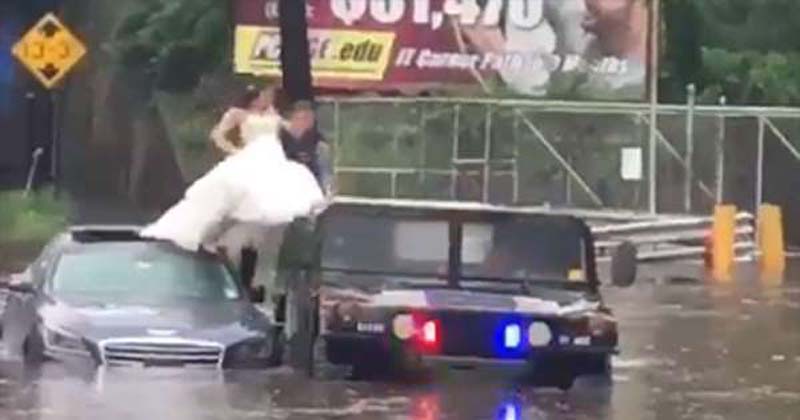 For one bride in New Jersey, "something blue" became the uniforms of officers who helped her into a Humvee when her wedding party became stranded in flash floods.

The Bogota Police Department said in a Facebook post the bride, husband, and wedding party got stranded in rising floodwaters Saturday in the borough located just outside New York City.

"If you are from the area, you know that it is flood prone," police said. "Within an hour yesterday, Bogota got over an inch of rain. This was not the normal flood!! This came to over 4 ft high from up stream, in less than 15 minutes‼"

[post_ads]Police were able to eventually get to the wedding group using a Humvee they acquired through the military Law Enforcement Surplus Program.

In the video, a police officer can be seen helping the bride step from the vehicle surrounded by water into the Humvee.

"Unfortunately, due to the quickly rising flood waters, this bride, her new husband and wedding party friends, got a rough start on things," police said. "The fortunate thing is, we were able to help them through their first rough patch. Obviously their day has not gone as planned, so let’s congratulate them on their wedding and give them best wishes for a lifetime of love and adventure, starting now!"

The flooding in Bogota was just one of the several weather-related incidents in the region on Saturday. Further west, a torrent of water sent cars from a dealership in Little Falls down a river, striking an overpass.

The National Weather Service's New York office had issued a flood advisory at the time for the region.