When Ryan Smith walked toward his race car last week at the Silver City Quarter Midget Club, he did so gingerly, up on his toes, holding the hand of his mother, Amber Smith, for balance.

Ryan, wearing a red fire-resistant suit, was helped through the car's frame by his father, Jeremy Smith. He was strapped in by belts that essentially pin the body's core to the seat, enabling only limited side-to-side movements. A safety device held his head in place.

His arms and legs had free range of motion. They are, like the mind, a racer's tools. Otherwise almost totally immobilized, this is where Ryan is free and most comfortable, where he can use his creativity, bravery and reflexes to maneuver a car around the 1/2 0th of a mile track in less than 8 seconds.

[post_ads]"What's amazing to me is the confidence this gives him," Jeremy Smith said. "It makes him feel normal. I don't see that anywhere else."

Ryan, who will turn 12 Aug. 27, has cerebral palsy, a neurological disorder that impairs muscle function. In his case, the condition affects the lower extremities, making it a struggle for him to walk from A to B but never to pin the accelerator to the floorboard and negotiate the turns of a pavement oval, all the while keeping a fishtailing back end under control. Ryan has tight heel cords and uses a walker at school but never at home or at the racetrack, where he prefers to hold the hand of his mom or dad or even younger brother Tyler, 9. Behind the wheel, Ryan needs nothing other than a push start like every driver and a green flag telling him to go until the checkers are waved.

Ryan has a slight learning disability and some speech issues, too, challenges most young boys are unaccustomed to - but all he knows. Last fall, the Smiths attended one of Silver City's "Arrive and Drive" introduction events and the boys immediately fell in love with a hobby that, for Ryan, offers no limitations or special care. No rules are created or changed to accommodate his disability. No one around the club treats him differently. No one lets him win or hesitates to slam his bumper. He gets to the track and gets it on, just like anyone else tough enough to strap into a car.

Silver City, where Joey Logano got his start, is celebrating its 60th anniversary. It is truly an uplifting, family-like atmosphere, a place where Ryan is recapturing a large part of his childhood. What is wonderful about this situation is the joy it has created. Not just for Ryan, but the entire Smith family, whose summer has been built around Saturday races and mid-week car prep, all that goes into a family-bonding endeavor that calls for heavy time and financial commitments.

Much less time is spent on video games these days, with cars to update and repair. Jeremy leads the garage work and the boys gravitate. It's been an expensive summer - about $10,000 spent so far - a difficult investment well worth it to the Smiths, whose family feels as whole as ever.

"It's brought everyone very close, that commonality, all working toward the same things," Amber said.

Ryan excelled in Paralympic swimming but found little happiness, didn't have much competitive drive, didn't feel at ease or at home.

Everything is different now. Both boys are in their first year of racing in Silver City's Senior Novice Division, where speeds can reach 40 mph - scary fast for the sharp turns on a tiny track. They have grown up romping around the family's Southington home on quads and other small vehicles. In the hours before they took the Silver City track for practice laps last week, Ryan had flipped a golf cart and had the bumps and bruises to show for it while preparing to drive later that day.

Tyler has been more successful in races that usually have a field of five cars. He has won three times. Ryan has been runner-up once - a race he led for the first 17 laps (of 25) before being passed by his younger brother. Amber and Jeremy joked with Tyler after the race, asking why he didn't let his brother win. And Tyler, who looks up to Ryan but has taken on the role of big brother in the ways he helps him, fired back, saying if he did that Ryan wouldn't have been the true winner, anyway, that it would be unfair to anyone involved.

"He's very cautious, more than the other kids," Jeremy said of Ryan. "He gives room where the other kids will be like, bang and boom. But that's good because if you're bumping too much and you cause a crash, you have to go to the back. So this is where I keep trying to tell him, 'Ryan, you just keep doing what you're doing.' He says, 'Dad, I'm too cautious.' I say, 'No, you're playing the game right and what's going to happen is they're going to put you up front because everyone else will be in the back serving a penalty.' That's where he's going to get the win, and I can't wait for it."

Tyler was faster - just a little - during last week's practice. He's also the one scared of thunderstorms. Ryan, the true big brother, is not. Ryan loves scary movies, too.

Life isn't easy for Ryan, diagnosed at 18 months after his parents - Amber, 36, and Jeremy, 40, Southington natives who married in 2005 - noticed he was walking with an abnormal gait. Ryan is supposed to do specific leg stretches multiple times per day and has had several surgeries. The next one will take place in November or December.

"I had hoped to do it in the summer, because he's off from school and I'm off from work," said Amber, a math specialist teaching grades K-5 in the Southington school system. "He's like 'Mom, absolutely not. I can't have a cast on my feet.' Now, he's been casted many times, in hopes of stretching his heel cord, and tolerated it well. ... I go, 'Why?' He says, 'Mom, I can't race with a cast on.' As a baby we'd just put the cast on and he's running around the house with a cast. But he's old enough now and this time we were able to listen to him. So we'll wait."
[post_ads_2]
It is important to wait because the racing experience has been important to Ryan's social development. He's a leader at Silver City. He's popular. He's pretty good at racing and getting better. He gets in the car and you'd never guess he limped toward it and needed help getting into it. He's free, happy, lap after lap, and one day, for sure, he'll roar past the checkered flag as the first car over the finish line.

"Special needs sports made him feel different," said Jeremy, who works overtime in his job at Tilcon to help support the boys' racing. "That's where this is awesome. You saw him out there with his brother. He's able to stay right there with him. It gives him a huge confidence (boost). This has really been great for him."

Jeremy and Amber Smith, parents to young racers Ryan and Tyler, are seeking sponsors to defray racing costs that could exceed $10,000 this summer. Anyone interested in more information should contact Amber at ambersmith2715@yahoo.com. Additional information on the Silver City Quarter Midget Club is available at www.silvercityquartermidgets.com. 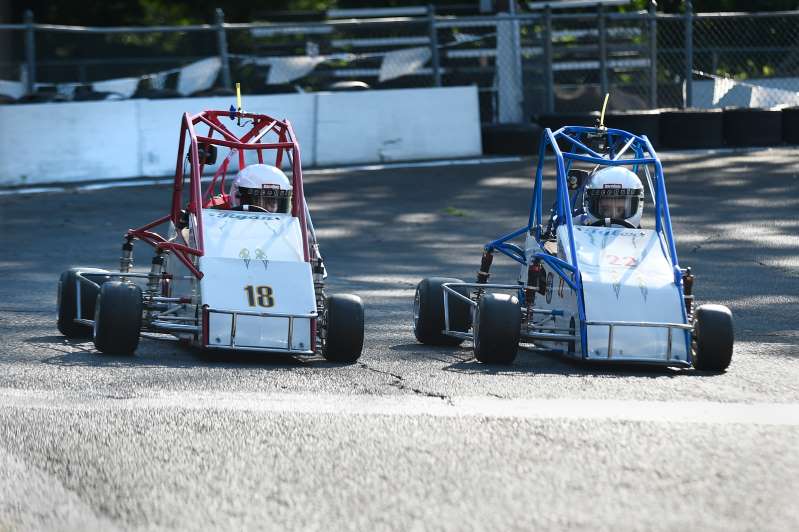