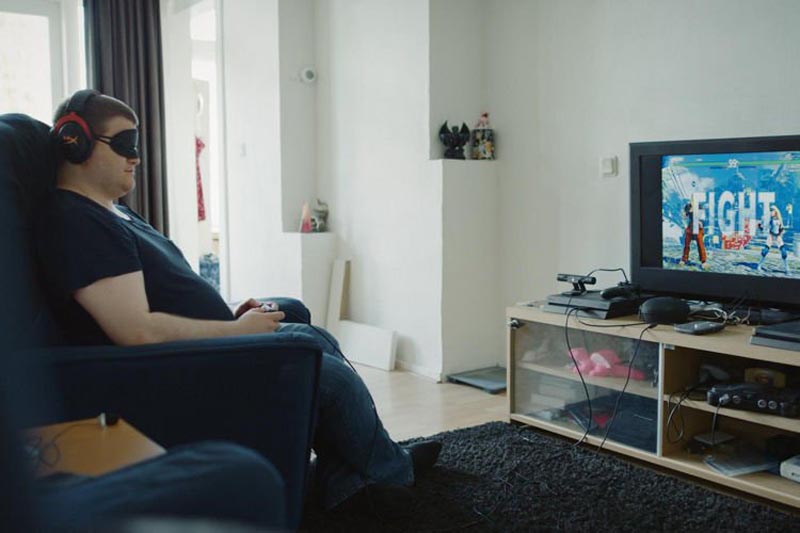 [post_ads]Today, “Blind Warrior Sven” is a competitive gamer who trounces some of the world’s best players at his favorite game “Street Fighter.” Watching Sven use his razor sharp gaming instincts to punish his opponents is nothing short of jaw-dropping.

But what will really blow your mind, is how Sven turned his handicap into an advantage that made him a celebrated professional gamer.

How Sven Went from Hobbyist to Pro Gamer

After his tragic sight loss, Sven was determined to keep playing video games. His plan was simple, but would take a tremendous amount of discipline. He would start by learning to play “Street Fighter II” using the sound effects of the game alone!

And that was the beginning of Sven’s remarkable journey towards professional gaming. In 2017, at the Sonic Boom Tournament in Madrid, Sven played “Street Fighter V” against Musashi, a world-class gamer.

The crowd exploded into cheers and applause as Blind Warrior Sven used his favorite character “Ken,” to defeat his opponent in the first two of a best-of-three match.

“I remember I was so happy when I won my first match.” Sven said, in an interview with Red Bull Esports. “I couldn’t believe I did it. I know it was just one match but it felt like I won the championship.”
[post_ads_2]
What’s amazing about Sven’s first victory is that he’d only been playing “Street Fighter V” for a year when he won the match. Since then, Blind Warrior Sven has become an international icon in the world of gaming.

Where did Sven’s uncanny gaming abilities come from? Surely, hard work and determination played a role. But there’s also a fascinating scientific phenomenon at work in Sven’s brain.


The “Superhuman” Science Behind Sven’s Success

Modern brain scientists tell us that hearing and vision are processed by the same part of the human brain. This means, the more visual stimulation your brain gets, the less “bandwidth” it has to process what you’re hearing.

Can you imagine what happens to a brain that gets NO visual stimulation?  The extra brain power goes towards processing auditory input. That’s exactly how Blind Warrior Sven uses only his bat like hearing to exploit the weaknesses of his opponents. But there’s more to Sven’s superhuman ability.
[post_ads_2]
The human brain can also rewire itself to make up for visual handicaps by enhancing other faculties. Brain scientists call this “neuroplasticity.” Here’s what Corinna M. Bauer, a scientists and instructor of ophthalmology at Harvard Medical School, said in a report about this miraculous phenomenon:

“Our results demonstrate that the structural and functional neuroplastic brain changes occurring as a result of early ocular blindness may be more widespread than initially thought. We observed significant changes not only in the occipital cortex (where vision is processed), but also areas implicated in memory, language processing, and sensory motor functions.”


In plain English, Dr. Bauer is saying that a brain which no longer has to process visual information will rewire itself to enhance memory, language procession and motor functions. So, Sven might have lost his eyesight, but he traded it for a set of “superpowers,” that make him deadly to his opponents.

What’s Next for Blind Warrior Sven?

No doubt, Sven has more stunning victories to look forward to. But that’s just the beginning. He also plans to help other handicapped gamers unlock their own superhuman potential:
[post_ads_2]
“I would like to continue playing in tournaments,” Sven told Red Bull Esports, “Hopefully I’ll find a sponsor one day. Besides being a pro gamer, I would like to help other blind people to start gaming. I’m thinking about promotion and workshops and such.”


No doubt, Blind Warrior Sven would be a godsend to other visually impaired gamers who hope to follow in his footsteps. Until then, his success will continue to challenge our assumptions about what can and can’t be done.