At this camp for burned kids, hanging out with firefighters helps emotional scars fade

When Dana Csonka was 8 years old, a house fire left burn scars over 18 percent of her body, including her face, neck and arms. She recovered and returned to school, but her classmates were merciless. “They would call me ‘blackie’ and ‘burnt crisp,’ ” she said. “I didn’t have any friends.”

Her nurses at Akron Children’s Hospital in Akron, Ohio, had a suggestion: to attend a nearby overnight camp for kids who had been burned. There, Csonka found community — she went back every summer for 10 years and made lifelong friends she is still in touch with now at age 37. “Just to be with other burn survivors who’ve been there and knew what I went through, how to deal with the bullying,” she said. “At burn camp you don’t have that problem.”

[post_ads]Since the mid-1980s, the Aluminum Cans for Burned Children Burn Camp has been offering children with burn scars a week of relief — from looking different, from worrying about stares, from hiding their scars with long pants or sleeves. “They have a lot of emotional things that they go through, trying to fit back in with society with their scars,” said Becky Mundy, burn center education coordinator at Akron Children’s Hospital. “At camp they can wear bathing suits and shorts and no one’s going to judge them.”

The camp, which held its annual session this week, typically has around 15 campers who are there to canoe, swim, play games and do other things that campers do all over America. Many are repeat customers, and most were treated at Akron Children’s Hospital or began coming after they moved to the area. The camp is free to campers and is funded by Aluminum Cans for Burned Children, an organization that raises money for burn survivors and their families.

For Kevin Aeling, 14, of Magnolia, Ohio, this was his second summer at the camp. A year and a half ago, a gas can he was carrying caught fire, leaving scars over 25 percent of his body.

At first, he was reluctant to attend.

“He said, ‘I don’t want people to stare at me,’ ” said his mother, Christina Mosteller. “I said, ‘Kev, it’s a burn camp. Other people are there who have burns.’ ”

He ended up loving it, and afterward his mother noticed a difference. “Before, he was embarrassed” about the garments he wore on his limbs to reduce scarring, she said. “After burn camp he was more like, ‘Yeah, this is me, and I’m thankful that I’m here, and if I have to wear them, I have to wear them.’ ”

The camp isn’t just for kids, or just for burn survivors. Every year, the Thursday of camp week is Fire Truck Day, when dozens of local firetrucks descend, along with camp alumni, doctors and nurses, and family members. Campers get to see fire vehicles up close and interact with the firefighters.

Sometimes, they are the very ones who rescued the campers, months or years earlier. It is, they say, a bond that never goes away. But Fire Truck Day allows them to see each other in a different light. For the children, it is a chance to see firefighters and their equipment in a nonthreatening context. And for firefighters, it can bring closure after a traumatic rescue.

“Most of the time when we’re involved in a rescue, you do what you can, you do what your job calls for, but you don’t really get involved and see people you’ve interacted with afterward,” said Mark Pazdernik, a lieutenant with the Akron Fire Department.

But memories of a bad fire can be haunting. Nearly two years ago, Pazdernik carried an unconscious 12-year-old girl out of a burning house in which her parents and siblings perished, and he still thinks of her each time he passes the house.
[post_ads_2]
Firefighters sometimes visit the children they rescued when they are bandaged and in pain. But seeing them at burn camp is different, said Mark Harper, a retired firefighter who has been going to Fire Truck Day since 1991 and was in one of the 25 firetrucks that came this year. “They get to see that, ‘Wow, that kid looked pretty bad when we last saw him, he was in pain, he was hurt, but look at him now — he’s running around and he’s adjusted to his situation.’ ”

At Thursday’s Fire Truck Day, Pazdernik got to see the girl he saved, Shaniya Simpson, now 13. She joined other campers to play in a mountain of slippery foam (normally used to clean up hazardous waste) and horse around with a fire hose. She shared a hug with the firefighters who had rescued her, and said it was good to see them.

“I think it helps her heal,” said Kim Canterbury, who was Shaniya’s teacher at the time of the fire and has since become her guardian. “Just by saying thank you.”

It was good for Pazdernik, too. “To see her go on with life and be happy, you’re able to see that you had an impact on her,” he said. “It’s definitely a lot more fulfilling.” 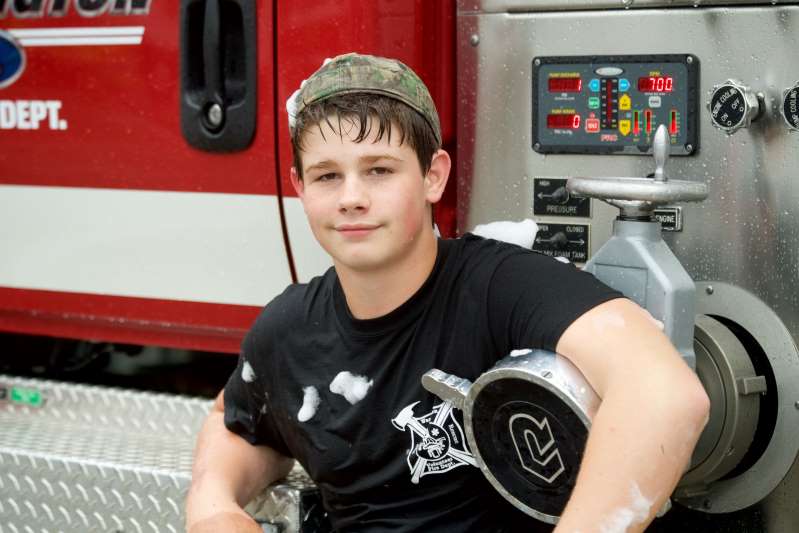