When life hands you lemons - well, don't even bother. Sixth-grader Jamaria Crump already has you beat.

It took the 11-year-old one year to perfect her top-secret lemonade recipe along with the pies, cakes and cookies that have made her all-things-lemon business, LemonTopia, a hit.

"I have unicorn lemonade, summer rain, mixed berry, strawberry, lemon-lime and a whole lot of other flavors," Jamaria said from behind the counter at her current setup in Federal Hill's Cross Street Market.

And because you were wondering:

And this kid entrepreneur isn't the work of some brilliant marketing agency - Jamaria built LemonTopia herself.

OK, with some help from Mom.

[post_ads]"She begged for a lemonade stand for a year or two before I let her do it," said Jasmine Hall, 34. "I was a teacher and I was running an after-school program, so time-wise there was no way we could do it."

When Jamaria's previous school announced a bake sale in the winter of 2016 it was the perfect opportunity. But the school told her she had to offer a baked good in addition to lemonade.

So Jamaria added lemon to desserts she already knew how to bake, like cookies and cheesecake. After the bake sale, she kept selling at school and community events.

"It continued by word of mouth until she did a Christmas party at the Living Well," Hall said, referring to the downtown community center. "We made so much money that we couldn't not do it anymore."

And with all that money, Jamaria must pay for expenses: ingredients, naturally, but she also pays her mother for rides, last-minute grocery runs and working the stand.

"She's a kid, so sometimes she's like 'alright this event is cool so I don't want to stand here at LemonTopia, I want to go listen l to the concert,' " Hall said. "If I have to fill in, she's paying me hourly to stand in."

"They spent the whole day there learning how to make lemonade, how to mix flavors, taste-testing," Hall said. "I love that part of it - the promotion, marketing, planning - but by all means she can cook all day on her own. I make her tell me when she turns the oven on and off, and that's about it."

It's a fine arrangement for Jamaria, who said she has always liked to cook and bake - although her mom says she's not as fond of cleaning up.

"I make her wash all of her own dishes. That's a constant battle; it's definitely taken over everything," Hall said. "My entire dining room is wall-to-wall ingredients and flavor syrups and mixtures that she's tried."

Soon, Jamaria will give her mom some breathing room. A house fire last year turned out to be a blessing in disguise - the family's Belair-Edison basement will be remodeled as a kitchen space for LemonTopia.

To turn a hobby into a business, Jamaria reached out to some lemonade mentors: Stephen Posey, a lemonade cart vendor, and Dorian Brown of Neopol Smokery, who went to high school with Hall. Brown said selling lemonade as a kid and teen was his favorite job, and he met with Jamaria to help inspire her.

"She was very curious and was kind of looking for a little encouragement, I think," he said. "She's a pretty bright spot in Baltimore right now. What's not to like? She's adorable, she makes delicious lemonade and she's running her own business."

And the community has taken notice. Last year, she was a vendor at the Red Bull Amaphiko Festival. Her Instagram account has more than 800 followers, and she regularly sells out at pop-up events. Her bottled lemonade is carried at The Melody Cafe in Mount Vernon.
[post_ads_2]
Jamaria's lemonade is hand-squeezed and made with sugar, but that's one of the few secrets she'll give away. The dessert line includes peach lemonade pie, gluten-free Key-lime cake, blackberry lemonade pie bites and lemon pie cookies. She also offers vegan desserts.

To sell three days a week as a pop-up tenant in the under-construction Cross Street Market, she has to bake for several days in advance, in hopes enough people will walk by. With festivals, there's less prep work and more guaranteed sales.

LemonTopia occupies a space renovated for Cheese Galore & More, one of several tenants who permanently left the market during renovations.

Market Manager Andy Weaver said Jamaria's "drinks and snacks are a cheerful presence in the market."

Hall said the market space takes more effort and makes Jamaria think of ways to drum up business. But Jamaria has shown commitment, both in the market and during the winter, when she developed hot apple-flavored lemonades to keep her summertime favorite relevant.

"I'm very proud of her for sticking with it because that was my worry - you don't want to invest so much into it and then her 11-year-old-ness kicks and she's like 'I'm over it.' But she hasn't," said Hall.

Jamaria has dreams of studying to become a pastry chef in Paris. For now, she'll bake and sell, turning LemonTopia into a strong foundation for a sweet future. 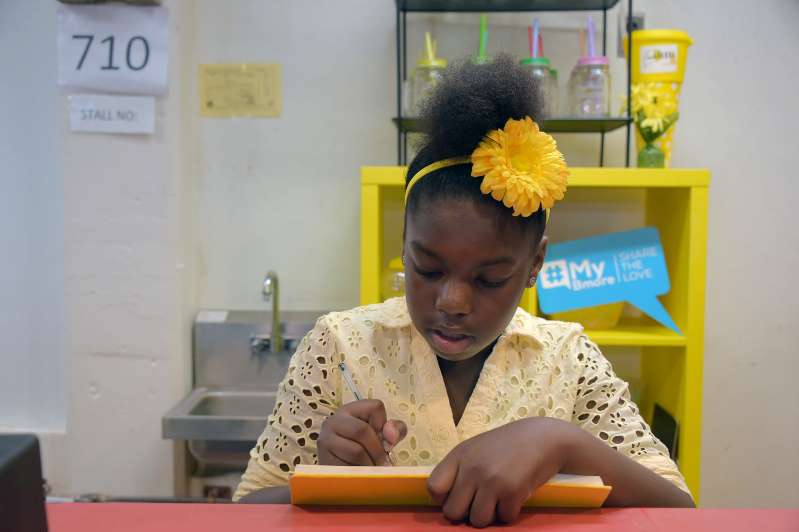