Hima Das has got India its first ever track gold at a global event by winning the 400 metre final at the World U20 Championships in Tampere,...

Hima Das has got India its first ever track gold at a global event by winning the 400 metre final at the World U20 Championships in Tampere, Finland. Congratulations are pouring in from everywhere.

Sprinter Hima Das scripted history by becoming the first Indian woman athlete to win a gold at the world level as she clinched the top spot in the women's 400m final race in the IAAF World Under-20 Athletics Championships here.

The 18-year-old Das, a pre-tournament favourite, clocked 51.46s to win the gold, which triggered a wild celebration at the Indian camp. This was though not her personal best as she had clocked 51.13 last month in Guwahti at the National Inter State Championships.

No woman before Das has won a gold medal in a World Championship at any level, be it youth, junior or senior.

She is also the first Indian -- men or women -- to have won a gold in a track event at the world level.

[post_ads]Tense on the starting block, Hima started slow and trailed on the home stretch, but her blazing run in the final 80m, where she overtook three rivals, saw her clocking 51.46 seconds.

Romania's Andrea Miklos took the silver in 52.07 while Taylor Manson of USA was third in 52.28.

"I am very happy to win the gold in the World Junior championships. I want to thank all the Indians back home and also those, who were here cheering me. It was very encouraging to have this kind of support," she said after the race.

In Guwahati, her coach Nipon Das says he wasn't worried when Hima wasn't among the top three at the final curve. "Her race begins in the final 80 metres. Her progress just shows how much potential she has. It has been just two years since she first wore spikes," says the coach about her ward whose personal best is 51.13 seconds.

Das, from Dhing village in Assam's Nagaon distrist, now joins the illustrious company of star javelin thrower Neeraj Chopra, who won a gold in Poland in the last edition in 2016 in a world record effort.


In fact, Das is the first Indian track athlete to have won a medal in the history of this competition.

Das was the favourite to win gold as she is the U-20 season leader in this quarter-mile event. Her rise has been nothing less than meteoric as she took up serious running only last year. Das had earlier clocked an Indian U-20 record of 51.32 seconds to finish sixth in the Commonwealth Games 400m final in Gold Coast in April. Since then, she has gone onto improving her timings. She lowered the Indian U-20 record in 400m to 51.13 seconds while winning gold in the recent National Inter State Championships in Guwahati.
[post_ads_2]

Hima started off with football, kicking the ball with boys in the mud pits next to the rice fields. She was then advised by a local coach to take up athletics.

Soon, the teenager was spotted by Nipon, an athletics coach with the Directorate of Sports and Youth Welfare, during an inter-district meet.

What a display from HIMA DAS! 🇮🇳😲


"She was wearing cheap spikes but she won gold in the 100 and 200. She ran like the wind. I hadn't seen such a talent in ages," Nipon says.

The coach asked Hima to shift to Guwahati, 140 km from her village, and convinced the youngster that she had a future in athletics. Her parents, Ronjit Das and Jomali, were initially reluctant to let the youngest of six children leave. But with Nipon not ready to hear a no, they relented.

Nipon arranged for Hima to stay in a rented accommodation near the Sarusajai Sports Complex. He eventually convinced officials to induct her into the state academy, which specialised in boxing and football.

"There was no separate wing for athletics but the officials were open to Hima being part of the academy after seeing her performances. Assam is not known to produce runners," he says.

T 2865 - CONGRATULATIONS .. #HimaDas , the first Indian Women to win a GOLD in World Athletic track event EVER ! INDIA is proud of you .. you have given us reason to hold up our heads HIGH ! JAI HIND !! 🇮🇳🇮🇳 pic.twitter.com/Q0YVCx6FSf


Yet another brilliant performance from India's daughter..Kudos to India's Hima Das who made history by becoming our first track athlete to become a world champion at any level after winning the women's 400m at the U-20 World Championships in Tampere, Finland on Thursday#HimaDas

It’s amazing that it coincides with the 5 year anniversary of Bhaag Milkha Bhaag & Milkha-ji’s biggest dream was to witness an Indian athlete win Gold in track & field. 😊👏🏽👏🏽👏🏽


Congratulations #HimaDas for this stupendous feat. The toughest race 400 meters. The first Indian athlete to win a title in any track event. Huge day for Indian athletics. #girlpower #proud #history 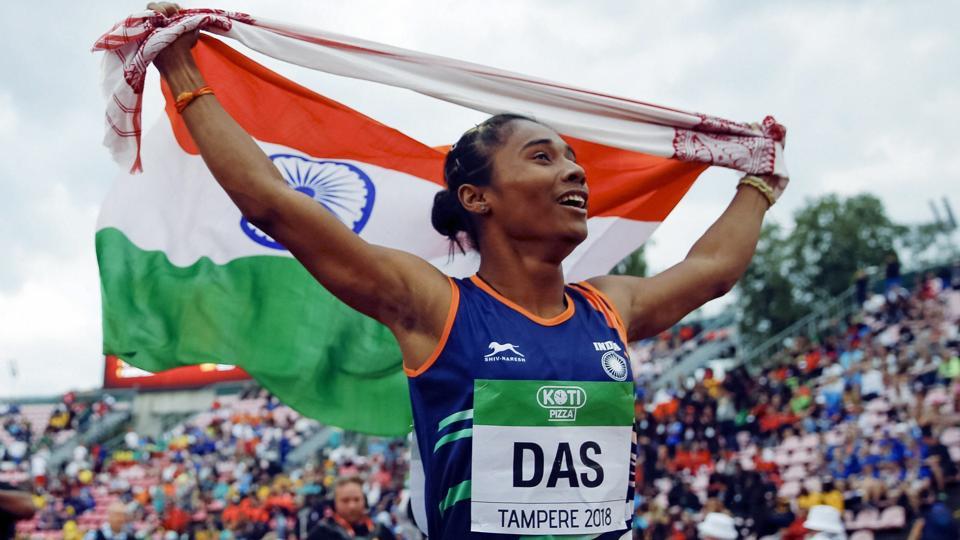