CBS New York NEW YORK A war hero’s Purple Heart that had been lost for 70 years brought together a long-lost family in the Bronx. At... 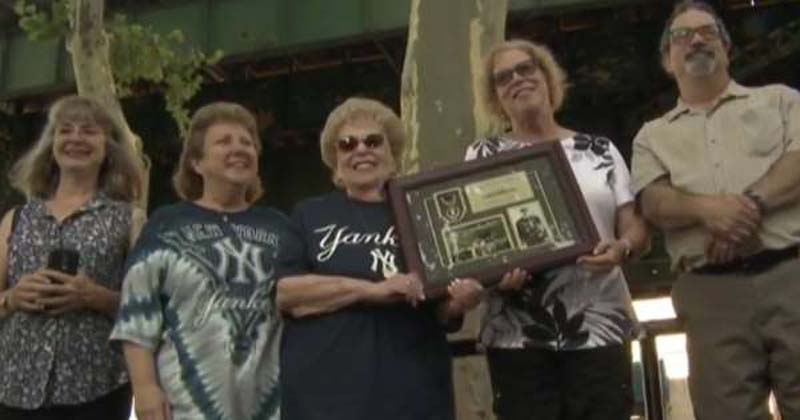 A war hero’s Purple Heart that had been lost for 70 years brought together a long-lost family in the Bronx.

At 84 years old, Florinne Ambramowitz hadn’t thought about her uncle’s Purple Heart since it was posthumously awarded to him in 1944.

Rubin Keltch was killed in the Navy during World War II. He was 24 years old.

[post_ads]“Uncle Ruby was on a ship called the U.S.S. Plymouth. (It) was stationed right outside of New Jersey. We didn’t realize that the Germans were so close to our country, and a German torpedo hit his ship,” Ambramowitz told CBS2’s Ali Bauman.

“He saved at least a dozen men, continuing going back into the sinking ship that was on fire to save people, and literately everyone made it out except for him,” said Zachariah Fike, of Purple Hearts Reunited.

Ambramowitz isn’t sure who accepted the Purple Heart on her uncle’s behalf. After all, she was only 11 years old at the time. But somehow, it ended up at an estate sale in Vermont four months ago.

“I saw there was a name on the back, I Googled it,” Jeff Kauffman said.

Kauffman called the Purple Hearts Reunited foundation to track down the war hero’s relatives. They didn’t just find one niece, they found two!

“I knew I was named for him, and my parents had told me about him,” said Keltch’s other niece, Ronnie Connors.
The first cousins both grew up in the Bronx, but their fathers were estranged.

Ambramowitz was 11 when a little park below the 4 train was renamed in her uncle’s honor. On Friday, she was back – 74-years-later.

“It’s a great honor to pass this back to you, so you can pass it back to the family,” Fike said, handing over the Purple Heart.

Now, thanks to a piece of family history, new family is found.

“A piece of my heart is filled in,” said Connors.