They survived the Holocaust, and then he rescued her from communism. Sixty-five years later, they’ve reunited.

Frank Shatz could not believe it was Erika Fabian walking toward him in the Virginia airport.

He bounded toward the woman he still saw as the 13-year-old girl he’d rescued from a Cold War prison so many years ago and gripped her in his arms as though afraid she’d disappear. Fabian clutched her suitcase handle tightly as the two embraced and kissed each other on the cheeks in the middle of the hallway, heedless of passersby.

“When she came through the door, I still saw her as a 13-year-old girl — and I still do somehow; it just doesn’t sink in that so many years passed,” Shatz said in a joint interview with Fabian last month. “She looks exactly like I remember her.”

Both survivors of the Holocaust, Shatz and Fabian met in 1953, when Shatz helped extricate Fabian and her sister from prison in Bratislava, Slovakia. The sisters had been jailed for trying to escape from communist Hungary to Austria.

Years later, Shatz and Fabian separately immigrated to the United States, where they lost touch. In the intervening ­decades, both forged new lives in America — Shatz became a columnist for the Virginia Gazette, and Fabian pursued professional photography and a prolific writing career, publishing articles, travel guides and books.

Fabian never forgot Shatz and never stopped trying to find him, though. So when an online search yielded a Holocaust survivor named “Frank Shatz,” she decided to reach out. Her email led to a flurry of emails, which led to long phone conversations, which led to Fabian’s flight last month from her home in California to Williamsburg to visit Shatz. The two spent four full days together.

“All of a sudden, after 60 some years, I find Frank, who was so important in my life at such an early age,” Fabian said. “I don’t have relatives left. I am the last member of my family . . . It’s indescribable.”

Shatz was 27 and working in Prague as a foreign correspondent for a Hungarian newspaper when a cryptic postcard arrived in his mail.

The missive, written in Hungarian, read, “I, and my two daughters, Erika and Judith, are in Bratislava. We need your help. Would you help us?” The note was signed “Piroska,” and the return address consisted of just a street name. Shatz looked up the street: It was the address of Bratislava’s central prison.

Shatz recognized the name on the card — Piroska was the widow of his cousin, who had lived in Budapest until the start of World War II, when he was deported to a slave labor camp and killed. Fabian was 4 when her father died. Fabian, her sister and her mother survived the Holocaust by obtaining false papers that labeled them Christian and moving to a section of Budapest where “nobody knew us.” Though Shatz was at first transported to a forced labor camp, he also outwitted the Nazis. He escaped and returned to Hungary, hiding successfully in Budapest for the duration of the war.

Looking at the postcard in Prague, Shatz realized the trip to the prison would be dangerous. Still, he immediately boarded the overnight train to Bratislava.
[post_ads_2]
“If a Jew came to a village in the old country somewhere . . . [and] another Jew [lived] in this village, the Jew who arrived knew right away that he will have a roof over his head; he will have food on the table,” Shatz said. “If one Jew lives in a village, he will help another. So that is why I took the train without hesitating for a moment.”

When he arrived at the gates of the prison the next morning, Shatz asked to speak to Piroska, who told him the story of her capture. Eager to escape communist rule, she and her two daughters had traveled from Budapest to Bratislava in December 1952 and attempted to cross the border to Austria under cover of night along with several other would-be escapees. But they were spotted by border guards, who shot at the group, killing many.

By dropping and lying flat on the snow, Piroska, Fabian and her teenage sister, Judith, survived — but were now trapped in prison. Given her young age, Fabian was housed separately from her mother and sister in a juvenile detention center.

Shatz traveled back to Prague and leaned on connections he’d forged in the Czech Ministry of the Interior to get Fabian and her sister out of prison. He could not earn Piroska’s freedom but ensured she was sent extra food in Bratislava.

For several happy months, Erika and Judith lived in Prague near Shatz, attending school and returning a semblance of normalcy to their lives. Then the Hungarian government demanded they and their mother return to Budapest — so they left.

By that time, though, Soviet leader Joseph Stalin had died, so Piroska and her daughters were able to avoid prison and instead return to “quote unquote normal life” in Hungary, Fabian said. In 1956, the trio immigrated to the United States. Shatz and his wife, Jaroslava, followed suit two years later.

“This whole experience became a very significant turning point in my life,” Fabian said. “I was on my own as a 13-year-old in a children’s prison, and this man shows up and says, ‘I’m your uncle, and I’ll take you to Prague with me.’ As you can imagine, it was an indelible meeting.”

Both Shatz and Fabian have earned a living in the United States with their words. But for a long time, there were certain words neither wanted to say.

They wouldn’t publicly discuss the Holocaust, preferring to leave the past behind. Fabian in particular knew the cost of looking back — her sister, Judith, unable to forget the horrors of the war, committed suicide at age 25. Her mother killed herself three years later.

In recent years, though, both have begun to speak out. Fabian volunteers at the Los Angeles Museum of the Holocaust, where she often addresses Mexican American students, she said. Speaking to them in Spanish — she is fluent in at least nine languages — Fabian relates her life story in the hope it will “encourage them to make a success of their lives.”

Shatz, for his part, has lectured on the Holocaust at the College of William & Mary. It was this role that reunited the two — Fabian emailed the Frank Shatz she found online only because she noticed his job at William & Mary and suspected it might be her uncle.

Since finding each other, Shatz and Fabian have hardly stopped talking, delighted to find family; to find someone else who suffered through the Holocaust; someone who understands.
[post_ads_2]
First, there were the hours-long phone calls. Then Fabian visited Williamsburg, meeting Shatz’s friends, taking tours of the area and talking, talking, talking — “wonderful long talks,” Fabian said, about anything and everything. But especially the past.

“I know so little about my father’s family that this was like a treasure house opening up for me to be able to ask questions about the war,” Fabian said.

Shatz’s apartment is too small for a house guest, so Fabian stayed in a hotel — though she spent little time there. Shatz drove to pick her up early in the morning and dropped her off late at night, when she immediately went to sleep.

“It’s like being a beachcomber and suddenly you found a diamond ring,” Shatz said. “For 65 years, I didn’t know that she is alive or not.”

Now the only worry is that the two might not have time to say all the words they want to say. Though both are grateful for the reunion, they know it came late in life.

“Now we just start running out of time to tell each other . . . ” Shatz said as his thick voice trailed off and he was unable to finish the sentence.

Seated next to him, Fabian interceded. Though she had to return to California, the two would stay in touch, she promised. And there was “a chance” she could return soon.

Shatz is already planning her next visit, she said. 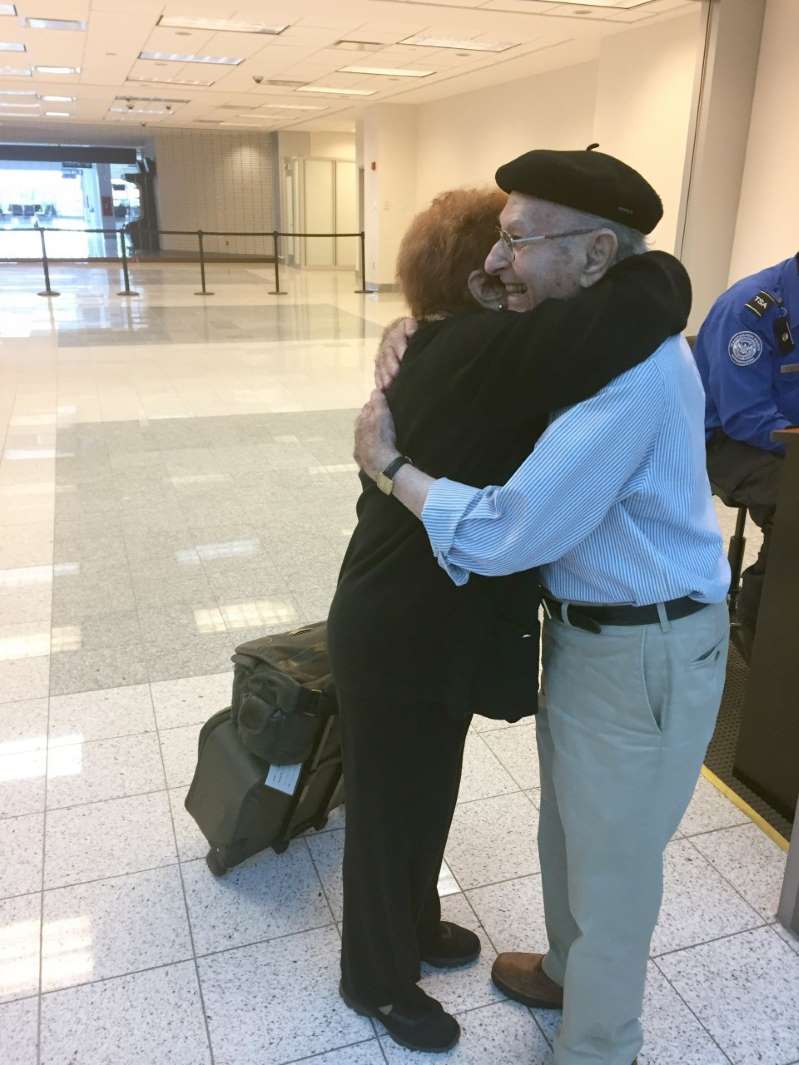