[post_ads]When Vickie Davis learned a Waffle House waitress saved her son's life, she went on a mission to track her down and pay it forward.

Her son was inside the Waffle House in Antioch, Tennessee, where four people were killed in a shooting in April. Davis' son credits his survival to a young waitress who asked him to switch seats so he wouldn't get wet as she washed dishes.

Because of the waitress, Davis' son was farther from the gunman when he walked in.

"She's my hero." Davis told CNN. "I was praying and asking God to help me find her so she knows what she did. She's going to be blessed."

When Davis returned to the Waffle House to get the waitress' information, she found that almost none of the staff was still working there after the shooting.

"I left my name and my number with the manager so he could find me so I could find her," Davis said.

One month passed and nothing happened. Davis said while she was getting new tires one day, she ran into the Waffle House manager by chance. She asked him how to get in touch with the waitress.

"I said, 'I've been trying to find you, I need to find that lady ... so I can bless her because she saved my son's life,'" Davis said.

The manager put Davis in touch with the waitress'fiancé, and the two messaged back and forth to try to find the waitress a dress for her upcoming wedding.

Davis says she called Glitz Nashville, a bridal shop with an event that gives free wedding dresses to military women, veterans and first responders. As a veteran of the US Army, National Guard and Reserves, Davis made a special request for the shop to donate a dress to the waitress.

"I begged them, called them, stayed on their case and asked if they would make an exception to the rule and give her a wedding dress," Davis said.

It worked. On July 11, Davis met Virginia Stanley, the Waffle House waitress who had saved her son.

"I helped her pick out a dress and we made it happen," Davis said.

Looking forward to the wedding

During the shooting, Stanley suffered facial scarring and a partial loss of vision from shattered glass, her fiancé Douglas Lauderdale told CNN. She has had difficulty being around large crowds and hearing loud noises since the incident.
[post_ads_2]
Lauderdale says she is working on getting better but has been in and out of the hospital since the shooting.

"The first person that stepped forward and helped us in any way possible was the lady that helped us with the wedding dress," Lauderdale told CNN.

Davis says her next project is to try and help Stanley get a service dog to assist her with stress and anxiety after the shooting.

"I'm on a mission today to try and find someone to donate her a service dog," Davis said. "I don't know how, but I'll do my best to make it happen." 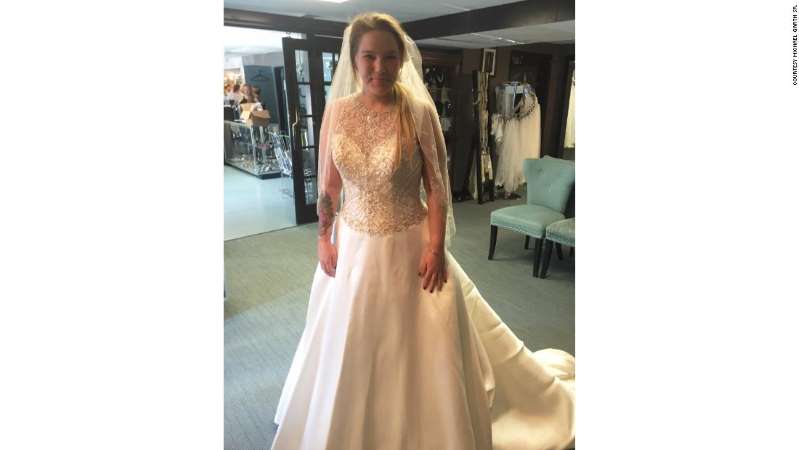