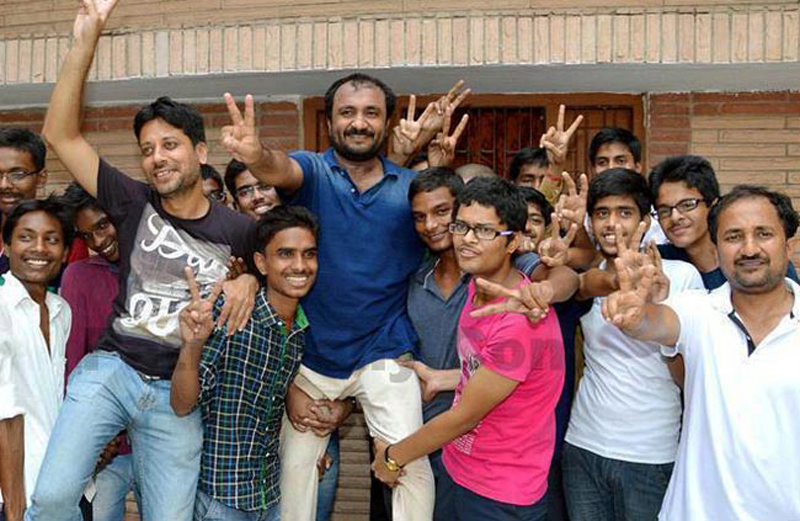 [post_ads]Now, its founder mathematician Anand Kumar finds himself embroiled in a major controversy. His students have leveled charges of deceit on him. Anand Kumar's Super-30 provides free coaching to meritorious students coming from economically and backward section of society wishing to make it to the prestigious Indian Institutes of Technology (IIT).

Some of these students have alleged that Anand Kumar made a misleading claim this year that 26 out of his 30 students cleared the IIT JEE exam. The students said that only three from Super-30 batch could qualify for IIT JEE.

After the results for this year's IIT JEE (Advance) were announced, Anand Kumar claimed that 26 of Super-30 students cracked the exam. The names of successful candidates as claimed included Onorjeet Goswami, Suraj Kumar, Yash Kumar and Suryakant.

"Only Onorjeet is the student of Super-30 and rest of the students who have been claimed by Anand Kumar to be his belong to other coaching institutes. Kumar had promised them hefty money as scholarship to be part of his conspiracy," alleged Gagan, a student of Super-30.
[post_ads_2]
Suraj Kumar is said to have taken coaching at an institute in Kota, Rajasthan but was presented by Anand Kumar as one of his Super-30 students. The "whistleblower" students also claimed that IIT aspirants thronging to Super-30 were asked to enroll themselves at another engineering coaching centre by the name, Ramanuj Classes paying Rs 33,040 as fee.

Anand Kumar used to mislead these students by saying that Super-30 students will be selected based on the performance of the students at the Ramanuj Classes. Around 40 students used to enroll in Ramanuj Classes hoping that they would get selected in Super-30.

It is being alleged that by asking IIT aspirants to enroll in Ramanuj Classes, Anand Kumar made over Rs 1 crore annually. Despite several attempts and calls, Anand Kumar could not be contacted for his comments on the allegations leveled against him.