The Indian Sikh community is miffed with Bollywood actress Sunny Leone for using her surname ‘Kaur’ in the upcoming biopic, and its really h...

The Indian Sikh community is miffed with Bollywood actress Sunny Leone for using her surname ‘Kaur’ in the upcoming biopic, and its really hard to understand why. Really hard. 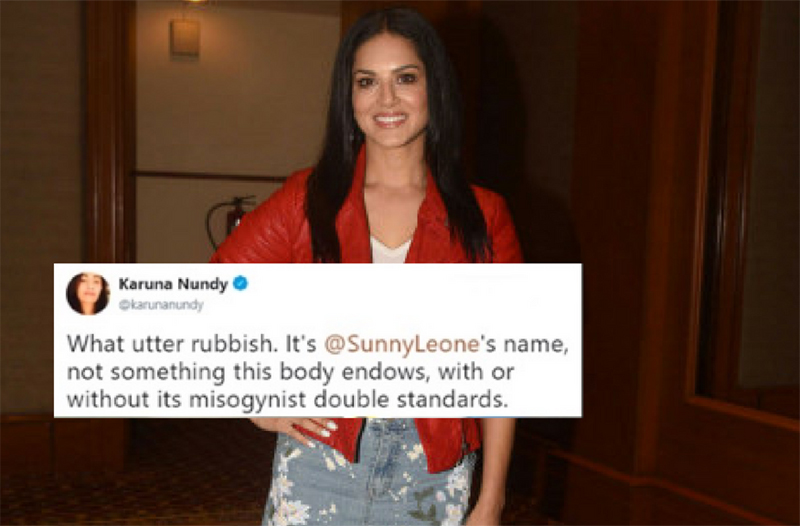 India is a place of strange contradictions. Every now and then, an anomaly pops up and sheds light upon the structured social inequalities of the country. And most of the times, these are highly gendered, misogynistic and extremely toxic.

[post_ads]Latest to this is the erupting controversy surrounding Canada-born Indian actress Sunny Leone’s web series 'Karenjit Kaur: The Untold Story'. Many in the Sikh community have been protesting against the title of the series.

The Sikh community is miffed with Leone for using her surname ‘Kaur’ in the upcoming biopic. Why? Because they feel having 'Kaur' in the name of an adult movie star is an absolute shame for the community.

The former adult movie star’s biopic came under the scanner after a member of the Akali Dal, Manjinder Sirsa, asked for the removal of the title ‘Kaur’ from the movie’s name. In an interview with ANI, the Akali Dal member said, “We have no objection with her profession, it’s her personal life. Our only objection is simply that we want them to remove the surname ‘Kaur’ because when she herself had earlier dropped ‘Kaur’ from her name then why it is being used now?"

Sirsa said he has urged the Chairman of Essel Group, Subash Chandra, to immediately remove it or 'face the consequences'.

In 1699, Sikh Women were given the last name 'Kaur' and and Men 'Singh' by Guru Gobind Singh, the tenth Guru of the Sikhs.  This initiate intended to end the caste system, social stratification and much of the apparatus of Hindu ritual and legalism.

In Indian society, an individual's name reveals his or her caste, and Sikhs were freed from the caste system by having all men incorporate Singh in their names and all women, Kaur.  Based on the premises of gender equality,  Kaur was also given to Sikh Women to establish an identity independent of their father or husband.

Twitter is miffed too about this ridiculous demand.
[post_ads_2]


Nobody objected when Sukhvinder Kaur changed her name to Radhe Maa and Gurmeet Singh became Baba Ram Rahim, for the reasons best known to them. Then why this whole fuss over Sunny Leone using her original name, Karenjit Kaur? What’s in a name? Also, Sunny has done no crime.


And they never opposed Jarnail Singh Bhindrawale - the most dreaded terrorist who sown the seed of terrorism in Punjab - being called a ‘Sant’ (Saint) https://t.co/twKkyX9QFU


When you carry the vagina in your mind, then men like Sisra object to Sunny Leone being a Kaur abc her very being.@MGNTheTwin


Ppl need to chill & let Sunny Leone live in regards to her biopic title Karenjit Kaur. The patriarchy & comments made around this are absolutely disgusting its really not needed. The double standards within the community is ridiculous. A man can do whatever but a woman can’t...


Heard some Sikh orgs are objecting to @SunnyLeone using ‘Kaur’. The concept of ‘Singh/Kaur’ was introduced to prevent names being indicative of people’s role/class/status. Why are they imposing their own ‘class’ system, defying the very teachings of the very gurus they worship?


What utter rubbish. It's @SunnyLeone's name, not something this body endows, with or without its misogynist double standards. https://t.co/Vz0SY3KQBM

When will we learn?