Participants of a wedding ceremony celebrate the victory of Russia over Spain in their soccer World Cup Round of 16 match, in the town of Pu...

Russian couple Yekaterina and Dmitry Vasilyev enjoyed a perfect wedding celebration on Sunday as they briefly halted their nuptials to watch the hosts defy the odds by beating Spain in a penalty shootout to reach the World Cup quarter-finals.

[post_ads]The couple, along with their family and friends, were huddled around a mobile phone as they witnessed Russia goalkeeper Igor Akinfeev save shots from Koke and Iago Aspas to send unfancied Russia through to the last eight.

Their wedding ceremony -- in a town outside St Petersburg -- started at 1400 GMT, the same time as the Spain v Russia match kicked off, and the guests kept track of the score in a Round of 16 tie that ended 1-1 after extra-time.

The penalty shootout commenced as they sat down for the reception and the soccer took center stage with the blessing of the bride and groom.

The room erupted into wild celebrations as Akinfeev's save secured a 4-3 shootout win for Russia to confirm the host's spot in the last eight.

"It's the best gift ever," the groom, who is a soccer fan and amateur player himself, said.

Before the start of the tournament, Russia were considered likely to exit at the group stage but have ridden a wave of home support to advance to last-eight a meeting against Croatia in Sochi on July 6.
[post_ads_2] 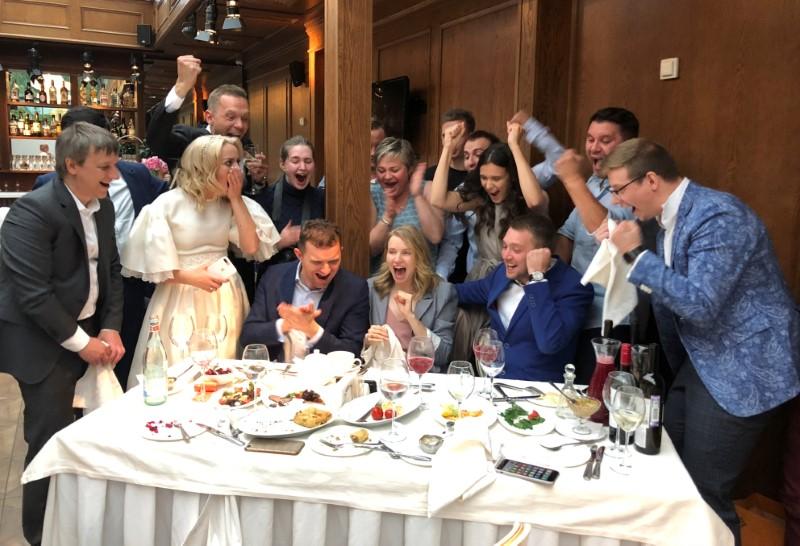