Prince George is 5-Years-Old. Can We Just Spare Him the Gay Memes?

How is it appropriate to decide the sexuality of a 5-year-old boy? By Parth Sharma , News18.com It all starts with a click and a ‘k...

How is it appropriate to decide the sexuality of a 5-year-old boy? 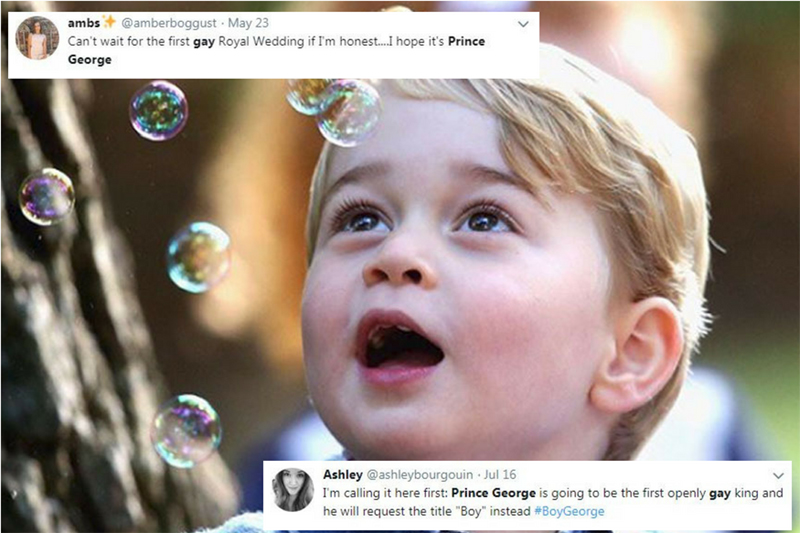 It all starts with a click and a ‘killing’ caption.

There are 12 men, maybe 13, with their big cameras going click, click, click at the sight of a 5-year-old boy in dark blue shorts and a bubblegum pink plaid shirt, his blonde hair gently blowing in the air messing the meticulously-done side part. The cameras go click, click, click. The photographers, frantically jumping and falling over each other while trying to click the boy, are shouting, “Please smile for the camera.” The boy flashes a small grin. Now they screech, “Please wave at the camera.” The boy shyly waves.

Two hours later, the boy’s photographs are now under the custody of the numerous ‘meme pages’ on social networking websites. The administrators of these social media accounts stare at the picture. What caption will get it some major clicks?

Counter question - “Are you sure?”

The 5-year-old boy, categorically the most famous 5-year-old boy in the world, is a trending meme before hour three, and a homosexual, too.

Scrolling through your cautiously colourful Instagram feed, you-- the supposed ‘liberal urban elite’-- defend the meme saying, “Oh, c’mon! It’s not like he’s gay. It’s just a meme. No one cares.”

But the boy just turned five.
[post_ads_2]
Giving a boy the theatrical crown of gay icon courtesy of ‘OMG YAAAAS WE RELATE TO THIS SO F-ING MUCH’ facial expressions and supposedly ‘camp poses’ seem ridiculous and lead to a sorry stereotype that all gay men are effeminate. The truth, however, is that some gay man can be effeminate and straight men can be effeminate too – IT IS OK TO BE EFFEMINATE. Period.

It is equally depressing to know that threads of masculinity are so fragile that it becomes alright as a society to make casual assumptions about the sexuality of a 5-year-old boy because he held hands with another boy.

[post_ads_2]
Hello, so it would have been ok if he held hands with a girl, right? Everyone would swoon and say ‘Awwww. They both look so cute together. He’s going to be such a womanizer when he grows up.' This is what is problematic with our society.


Mockery, well intended or not, of a boy’s innocence is cruel and NOT funny. It’s perfectly ok to be gay or straight. Yes, saying that is not enough. Yes, the society at large is rough on the LGBTQ community is the understatement of the millennium, but the desperate need to latch a popular figure with the homosexual tag (because don’t we all just love the idea of a future royal gay wedding) is problematic. Let the boy grow up. Let him figure who he is. For a community that largely preaches about acceptance and “HEY, IT IS NOT OK TO ATTACH A LABEL TO US”, how is it ok to label a 5-year-old as a homosexual because he plays on to some petty stereotypes?
[post_ads_2]

Gay Twitter:
We need to liberate camp people and stop the assumption between campness and being gay

Also Gay Twitter:
Omg Shawn Mendes and Prince George are definitely gay even though one won't admit it and one is a child


While it cannot be stressed enough that homosexuality is just as normal as heterosexuality it is equally necessary to allow the individual to decide who they want to be. We are mere spectators. We, the millennials, drink our Frappuccino and complain about our first-world problems – we don’t get to decide a boy's sexuality. Nope.