By Mark Price, The Charlotte Observer

Mothers will do almost anything to make their children happy, so it's heartbreaking to imagine one west Charlotte mom was using pots of water from the kitchen sink Sunday to fill her son's kiddie pool.

It was the boy's birthday and the family didn't own a garden hose.

[post_ads]The mom was hard at work in 90-degree temperatures when the Charlotte Fire Department's Engine 18 passed the home and happened to see her pouring water from a pot into the pool.

What happened next makes perfect sense, even if it is unexpected.

The fire crew stopped, got out its hose and filled the pool for her.

Photos of the moment were posted on Facebook and they show impatient children in swimsuits and one broadly smiling woman.

She's not identified in the photos, but one image shows her in the pool with the kids, and a boy has his arms around her neck.
"Today, after leaving a medical call, Engine 18 stumbled across a family desperately trying to fill up a kiddy pool by filling pots from the sink," says a Facebook post by Fire Station 18.

"What was just a simple task for us turned into laughter, smiles, and a life long memory for the neighborhood kids as well as the men on Engine 18."

"That family will never forget this memory!" posted Kim Marks on the Engine 18 Facebook page.

"Men and women like you are the reason I still believe there is good in the world," wrote Shulonda Johnson on Facebook page. 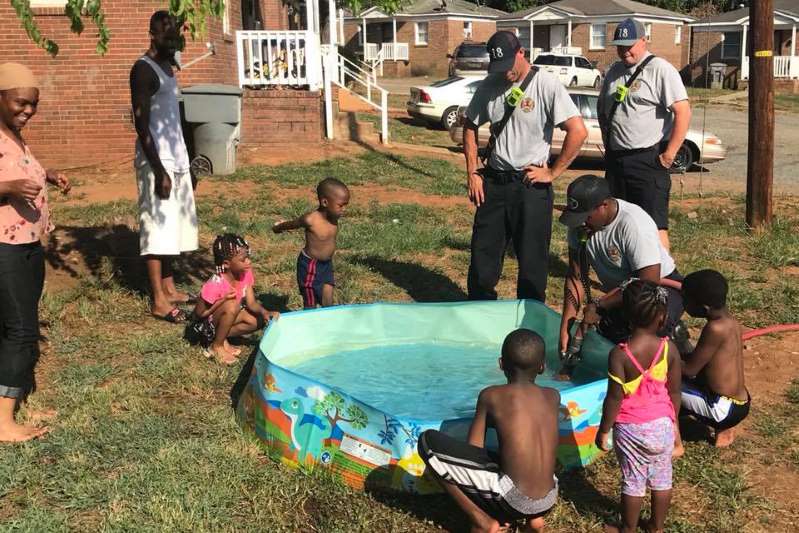