Mexican Police Department Gets Armed with Slingshots Instead of Firearms

Police officers in the Mexican town of Alvarado were recently stripped of their firearms and armed with slingshots and rocks instead, after most of them failed their control tests and were deemed unfit for service.

[post_ads]After only 30 officers of the 130-member police department in Alvarado managed to pass their control tests for the use of firearms, Miguel Angel Yunes Linares, governor of the Mexican state of Verracruz, decided to strip the entire department of firearms. The governor`s office has confirmed that similar actions have been taken in other municipalities, like Ixtaczoquitlan, Ciudad Mendoza and Pueblo Viejo. However, some local officials have accused Yunes Linares of stripping local law enforcement of what little protection they had against the criminal organisations in Verracruz. In Alvarado, the officers were armed with slingshots and rocks.

Bogar Ruiz Rosas, the mayor of Alvarado, protested the decision to have his local police force disarmed by organizing a symbolic handover event where he issued police their new sidearms - slingshots and rocks. During this event, Rosas argued that most of those officers who failed their control tests did so because the department is currently made up of mostly newly recruited officers.

"Today we delivered slingshots to our municipal police," the mayor told reporters present at the handover event. "The citizen governor made the decision to take all the weapons, which disqualified him completely, as it violates our autonomy. It`s clear to us that this is a totally political issue and we have to be prepared to carry out our work, professionally, as you have seen us do it."

Photos of the Alvarado police officers wearing their unusual sidearms and videos of Mayor Ruiz Rosas handing them out went viral on Mexican social media, and prompted a response from the Verracruz government. In an official statement, governor Angel Yunes Linares warned policemen in Alvarado that they cannot continue doing their job unarmed and that continuing to do so would be against the law, and they could be subject to prosecution.
[post_ads_2]
But don`t slingshots count as weapons in the right hands? Plus, this wouldn`t be the first time Mexican police would have to fight crime with slingshots. In 2007, over 60 slingshots were issued to officers in the violent border city of Tijuana, after their firearms had been confiscated by army soldiers, on allegations of collusion with drug traffickers. 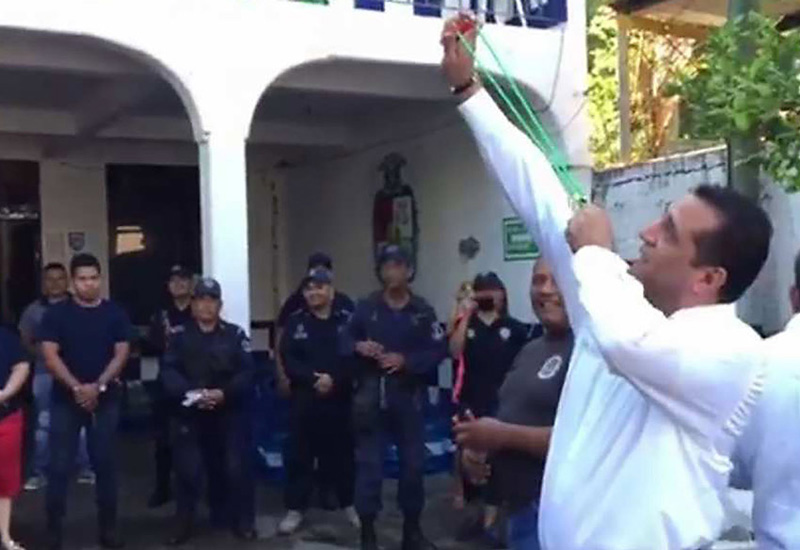