Since she was a very little girl, the now 18-year-old Alanna Wall's favorite pastime was having her nails done. It wasn't just the pretty polish and shiny glitter that she loved; it was also the quality time at the nail salon with her grandma and the whimsical reprieve from everyday tasks. By the time she was 10, she was determined to bring this joy to those who may especially benefit from this lighthearted indulgence: pediatric patients and girls with special needs.

[post_ads]"I loved the way that having my nails done made me feel: girly and special," Wall, who goes by Lonnie and lives in Dayton, Ohio tells NBC News BETTER. "I knew that some kids didn't always feel that way — didn't feel beautiful — and I wanted to bring that feeling to them."
Plan A didn't work; but plan B was pretty magnificent

Wall had a dream but she didn't have a clear way of executing it (after all, she was only 10 years old). She tried volunteering in hospitals but was turned down for being under 15 — the minimum age for approved volunteers. Her mother, Valerie, a nurse who has believed in her daughter's mission from the start, turned to the Miami Valley Down Syndrome Association to see if they'd be interested in letting Lonnie come in and give manicures to the girls there. They were — and Wall quickly became a favorite volunteer at the center, where she would go on to form lasting friendships.

"I'm still close with the first girl I ever polished [who I met there], Olivia, who has Down Syndrome. She's 24-years-old now and in a way I feel like we grew up together," Wall says. "I try to make the monthly meetings there, but if not I always see her and my other friends at the annual Christmas party."
From a pipe dream to a registered non-profit

Working with girls at the Down Syndrome Association gave Wall the opportunity to share her time and talents with people she may not have otherwise met who enjoyed getting their nails done; but she was still determined to bring nail art to children in the hospital.

To help make this happen, she registered Polished Girlz as a 503(c). Her parents helped with all the paperwork, just as they helped her trademark the name, launch a website and establish a presence on social media.

A call to action for other kids looking to give back

Lonnie may still not have been able to volunteer herself in hospitals, but once official, Polished Girlz could enlist the volunteer services of older girls who were looking to fulfill community service hour requirements for their high schools.

Soon, girls who met the 15-year-old age minimum were signing up to join the cause. The process for volunteers is pretty simple: you fill out an application online and if approved, you donate $55 to Polished Girlz which covers the cost of your Caboodles carry case, a Polished Girlz T-shirt, nail polish, remover, hand sanitizer, glitter and nail art stickers. You can be as young as eight to apply. There's no age cut-off.

"I didn't want to limit young girls who want to serve their community like I did," says Wall, who is now old enough to do hands on hospital volunteer work where approved. "I felt it was important for kids to know they could be a part of this."

Wall adds that you also don't have to be/identify as a girl to volunteer. "We have plenty of Polished Guyz!"
Thousands of kids and some very powerful bonds

In the seven years since its inception, Polished Girlz has acquired over 900 volunteers around the U.S and has served thousands of children in a growing list of hospitals and care facilities. Though Wall has had her hands full with school commitments ("my parents and I always agree that my education has to come first," she says), she still frequently spends weekends in the hospital with her nail kit.

Some of the children she works with she's visited multiple times and has become particularly invested in; take Mariah, for example, a four-year old girl who was born with chronic intestinal pseudo-obstruction (CIPO) — a rare gastrointestinal disorder.

"Over the past three years Polished Girlz has popped in to polish Mariah, who is in and out of the hospital constantly," Erin Grubb, Mariah's mom tells NBC News BETTER. "The first time Lonnie and her mom came, Mariah was in the ICU and the world was not so bright. But they came in and Mariah got to feel so special and pretty. It's so important to help these kids feel beautiful and normal especially those dealing with a chronic condition who really need comfort and normalcy. They're also great with siblings who may be feeling left out when the majority of the parents' concentration is on the sick child."

Grubb says that Wall keeps track of Mariah's story by following the family's Facebook page Prayers For Mariah, and might swing by with her kit when noting that Mariah is back in the hospital. Wall also posts updates on Polished Girlz's Instagram about Mariah's journey and her strength, summoning not only good wishes for the child, but helping raise awareness for CIPO, a condition that Grubb says affects only one in 300,000 births.
This is isn't just fun for kids, it's liberating
[post_ads_2]
It's Grubb's hope that more hospitals will enlist organizations like Polished Girlz, or implement their own self-care programs for children who could benefit from a splash of fun in such a starkly serious environment.

"Everyone can use a spa day now and then," Grubb says. "And I know for me, seeing Mariah happy is the brightest moment in my day. I wouldn't miss it for the world."

Wall has every intention of continuing to grow Polished Girlz, but right now, she's primarily focused on getting ready for college in the fall.

"I'm going to USC," she says with well-earned pride. "And I'm studying business."

Surely, she's already something of a master in that department. 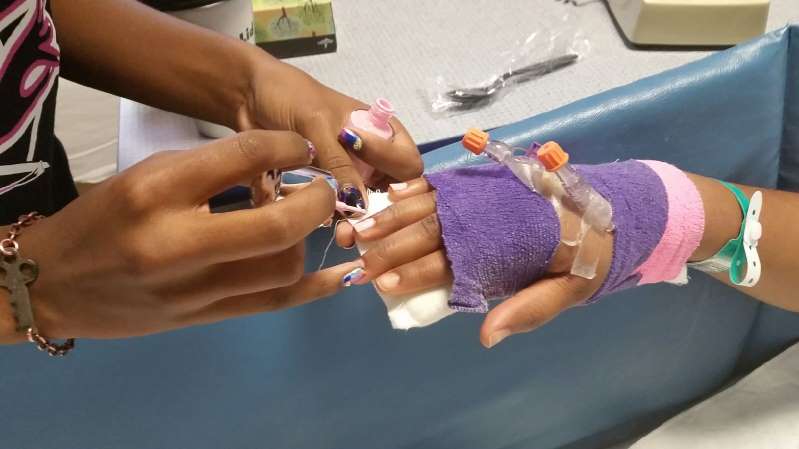