If you live in the Rosewood neighborhood or commute along Rosewood Drive, you may have seen Clayton Woodward on his morning rounds.

He's the man dressed in a yellow shirt emblazoned with "Clean Team" on the back, picking up trash on Rosewood Drive from Harden Street to South Kilbourne Road.

Woodward likes to get started early in the morning, around 6 or 7 a.m., and walks the 3-mile round-trip route armed with a bucket and grabber. He picks up all sorts of litter — from cigarette butts and food wrappers to pieces off automobiles that have wrecked and garage sale signs.

"People like to put signs up, they just don't take them down. That's where I come in."

Woodward began doing his clean-up duty about three years ago after returning home to Columbia.

[post_ads]The daily route along Rosewood had been underway for several months before Dave Britt, executive director of the Rosewood Merchants Association, was told about Woodward and offered to pay him for his work. In addition to picking up litter, Britt says Woodward reports and removes any un-permitted signs and notifies the Merchants Association of any graffiti in the area.

Woodward has been officially working for the Rosewood Merchants Association for about two years, around 10 hours a week, a couple of hours each day.

Woodward grew up in the Rockbridge area in northeast Columbia — he and his twin sister attended Richland District 2 schools. She graduated from Spring Valley High School in 1975.

An admitted "goofball" in school, Woodward went to Camden Military Academy for his senior year, where he says he learned a lot. The class size at Camden was considerably smaller than at Spring Valley — 34 young men at the military school compared to a class of 760 at the public school.

While his sister went on to college, Woodward says he'd had enough and started work, driving delivery trucks of building materials. He joined the Air National Guard in 1978.

The Woodward children lost their father in a fire in 1980, and Clayton left the Guard for a little while. He joined the U.S. Army in 1982 and was stationed at Fort Benning, Georgia. ("A great place," he says).

"I did my three years of service and then I got out."

Woodward decided to move out of state for a while, "just to do something a bit different." He met some other former servicemen but the job prospects weren't panning out as he thought they might. While in Pittsville, Maryland, Woodward was hit by a truck while riding his bicycle and almost died.

"They had to (re)start my heart. I had a collapsed lung. I woke up five days later in the ICU... after a month, I recovered from that and told my sister that I'd like to come home to Columbia."

Before he could do that, though, Woodward had to take care of himself.

He admits that he has had trouble with alcohol.

He ended up spending some time at his sister's house at Pawleys Island. "They didn't believe that I'd quit drinking," says Woodward.

He came back to Columbia to help take care of his mother, moving into the family home on Heyward Street.

"She couldn't believe that I was sober and a Christian," he says.
[post_ads_2]
Woodward and his mother had six months together before she passed away in her sleep on April 1, 2014. "She'd never really seen me sober in a long time," he says. "It was just such a blessing that I had six months with her before she went to be with the Lord."

"When I first started working, the shirt said 'Dream Team' and a lot of folks would stop and say 'Hey! Dream Team, I want to get on that. What do y'all do?' I'd tell them I'm the only person on the team and it was a dream job for me to get it, so I guess that's where the 'Dream' came from.

"After about six months, my boss noticed the back of the shirt and said 'that's supposed to be Clean!' "

Woodward says that not as many people approach him since Dream became Clean, but that's OK.

On his Wednesday morning rounds, Woodward had a couple of people honk and wave from passing cars. Woodward is close to the end of his route when he turns and says, "I'll do this as long as they let me."

"It's been a blessing," he says. "Every day that I'm out here doing this, I just think about how bad it could've gotten. Where I could've been." 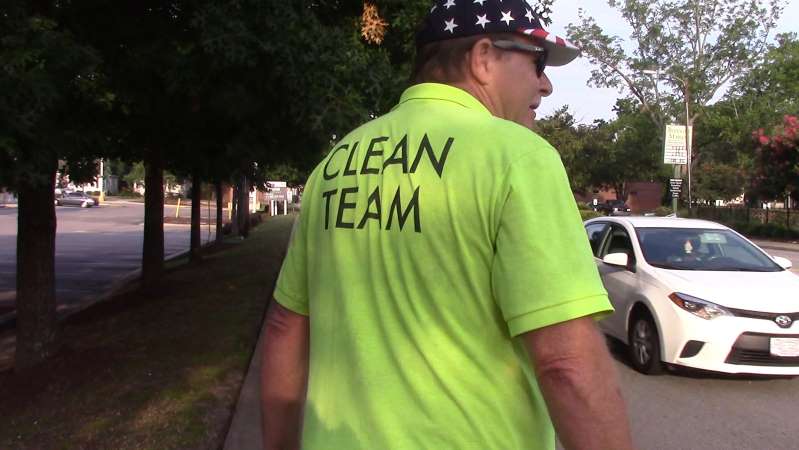