'Every year on my birthday I travel to meet girls who are struggling to go to school  --  to stand with them and to make sure the world...

'Every year on my birthday I travel to meet girls who are struggling to go to school  --  to stand with them and to make sure the world hears their stories', the young activist says. 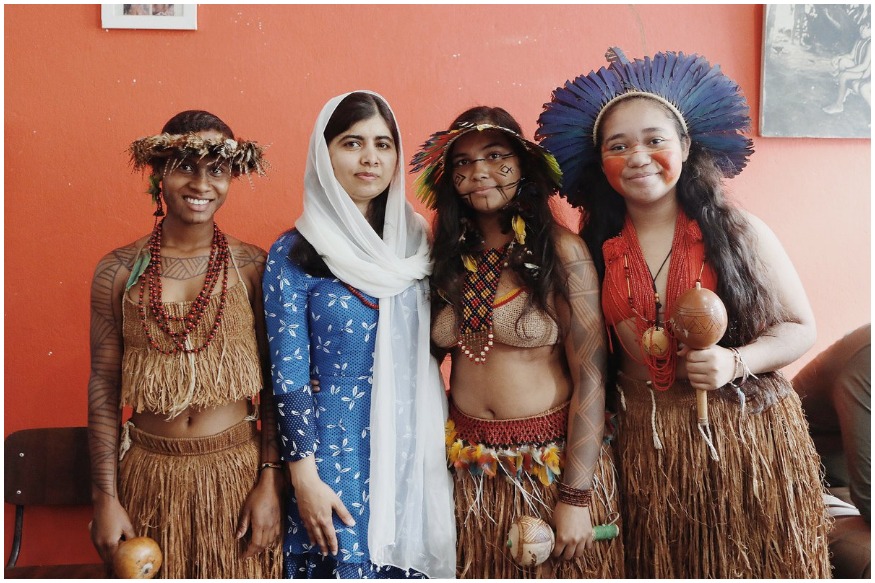 Yes, Malala celebrated her 21st on the beaches of Brazil. But the 21-year-old was not spending it like any average young adult.

[post_ads]Ever since 2012, when a thankfully non-fatal Taliban shooting catapulted the then 14-years-old Pakistani schoolgirl to international attention, the world has followed attentively the growing up of Malala Yousafzai.

At age 11, she went from an average Pakistani child living under Taliban rule to an outspoken advocate for girls' education.

By 15, she'd faced an assassination attempt that she fortunately survived.

And by 17, she'd become the youngest person to win a Nobel Peace Prize.

I am so grateful I could share this amazing experience with my friends @ElaineWelteroth, @ElJuanpaZurita and @jeromejarre. Each of us was inspired by the girls we met and the stories we heard. pic.twitter.com/Xa5scj1GNu


And at 21, she has become the face of the movement for security women's rights to safety and education in conflicted areas across the world and a household name in almost every country.
[post_ads_2]
Turning 21 on July 12, the young activist spent the day in Brazil, doing what she has done on past birthdays: speaking to girls who still do not have access to education.

I turned 21 today in #Brazil. So happy to spend my birthday in this beautiful country with amazing girls. Want to meet some of my new friends? pic.twitter.com/OFRRyQ9kCR


"My birthday wish is that all girls can have access to safe and quality education," she tweeted from Northeast Brazil, where she celebrated the big 21 by advocating for local girls' rights to attend school. She spent the days before her birthday in the city of Salvador, in the Bahia state of Brazil, where she met with a local schoolgirl named Maikele. Maikele is part of the indigenous Tupinamba tribe from northeastern Brazil, and her father was assassinated as part of a territorial conflict, leaving behind her mother with nine children to take care of.

Maikele, Hiorrana and Itocovoti live in Bahia. As indigenous girls, they face discrimination in school and in society. But they are strong and determined to build a better future for their community. pic.twitter.com/VaGSyW9nJR


Malala spent the day with girls like Maikele to learn more about what barriers and challenges they face just trying to get an education.
[post_ads_2]
"I'm also here to highlight the issues that these young girls are facing, and that there are 1.5 million girls in Brazil who are out of school, and we see this huge disparity when it comes to the Afro-Brazilian and indigenous population in Brazil," Malala told 'Good Morning America', adding, "So something needs to be done."

Izabella and Bak are teenagers who create street art to fight back against the sexism and racism they experience. Their organization is called @RedeNami. pic.twitter.com/ATG37mvjYt


"I'm here to raise my voice and stand with them and invest in local activists here," she added. "My birthday wish is that all girls can have access to safe and quality education."
[post_ads_2]
Last year, she spent her birthday in a camp for Internally Displaced People in Iraq, where she met with 13-year-old Nayir who fled her hometown of Mosul after ISIS took over the city. Nayir said she was out of school for three years, but after beginning to attend school at the IDP camp, she says "it was as if all my hopes came back."

We had a lot of fun playing football with girls on the beach. I didn’t know my dad @ZiauddinY was such a good goal keeper! pic.twitter.com/Q3YszmpLSC


"I know how Nayir feels," she wrote on her website.

For her 19th birthday, she was declaring #YesAllGirls in Kenya, where she visited the world's largest refugee camp.

"Every year on my birthday I travel to meet girls who are struggling to go to school  --  to stand with them and to make sure the world hears their stories," she wrote online.