He staggered off into an island marsh and vanished last winter, leading conservationists to believe the last burro living among North Carolina's wild coastal mustangs had died.

But Raymond, as locals call him, proved too stubborn to go quietly.

Not only has the once-crippled burro re-emerged on Corolla's beaches, but he picked up a harem of three mares.

"He's sterile, but he doesn't know it and we're not going to tell him," says herd manager Meg Puckett. "He challenged a much younger stallion for those mares and he won. That's saying a lot."

[post_ads]Even she thought Raymond had died after a risky last-ditch effort was made in November to save him. A group of specialists with the Corolla Wild Horse Fund drugged Raymond and literally sawed down his hooves, which had become so deformed he couldn't walk.

"A domestic horse would not have survived. He was just too stubborn to die," Puckett says. "It's that ornery, stubborn side that has made him one best known of the herd. Everyone knows Raymond."

Islanders took to social media recently to celebrate the return of "the mule who thinks he is a mustang," as Ann Litzelman put it on Facebook.

Included among the posts were stories from people who had experienced Raymond's ornery side.

"Lordy, he is a piece of work," wrote Estelita Buie. "This dude has trapped me in the outside shower before. Didn't think I'd ever get inside to get dressed ... (He) ran me out of the yard while I was laying in a chair."

Puckett says Raymond is more than just an eccentric bit of island culture, however. He's also a piece of Outer Banks history that vanished as developers and tourists moved in.

The wild colonial mustangs are believed to have been brought to the Outer Banks 400 years ago by early explorers. Burros came later, when farmers worked the barrier islands and their livestock got loose among the mustangs.

The farmers are long gone, and Raymond is the last descendant of that livestock. When he dies, so goes a little bit of island history, Puckett says. 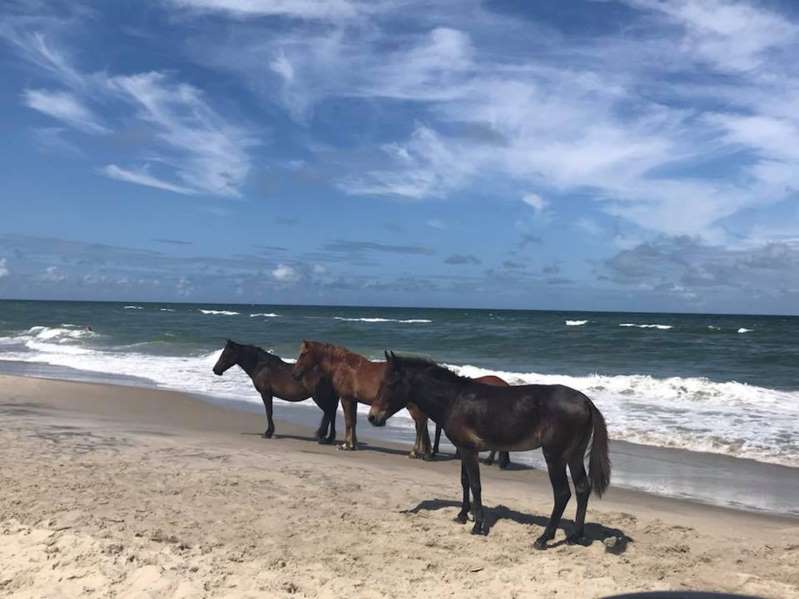