[post_ads]JetBlue flight attendants turned into guardian angels during a trip from Florida to Massachusetts and saved the life of a tiny French bulldog.

The owners of 3-year-old Darcy became alarmed when they noticed that her tongue turned "blue" during the flight on Thursday. Darcy had started pushing her head against the mesh part of her carrier.

Michele Burt pulled her out from under the seat and put Darcy on her lap to try to help her relax.

However, Darcy was clearly in distress. The bulldog may not have survived if not for flight attendants, who brought bags of ice and then a small oxygen tank with a mask.

"I placed the mask over her face, and within a few minutes she became alert and after a short time, she didn’t want the mask," Michele Burt wrote in a letter to JetBlue. "I believe [crew members] Renaud and Diane saved a life. Some may reduce the value of the life because Darcy is a canine. I do not."

She said the flight attendants were well prepared because Renaud has a French bulldog of his own named Penelope.

Burt and her husband were traveling with their three small dogs, as they always do, usually without incident, she said. She praised the flight attendants at a time when the news cycle "is so negative and divisive."

"We all are affected by cabin pressure and oxygen fluctuations, human, canine and feline, etc., but the fact that the Attendants were responsive and attentive to the situation may have saved Darcy’s life," Burt wrote.

JetBlue said in a letter to the family that "it was a pleasure to read your message and we're happy to hear that Renaud and Diane went above and beyond in helping you and Darcy especially handle the flight better!"

Burt said that Darcy has made a complete recovery and will not fly without approval from her vet. 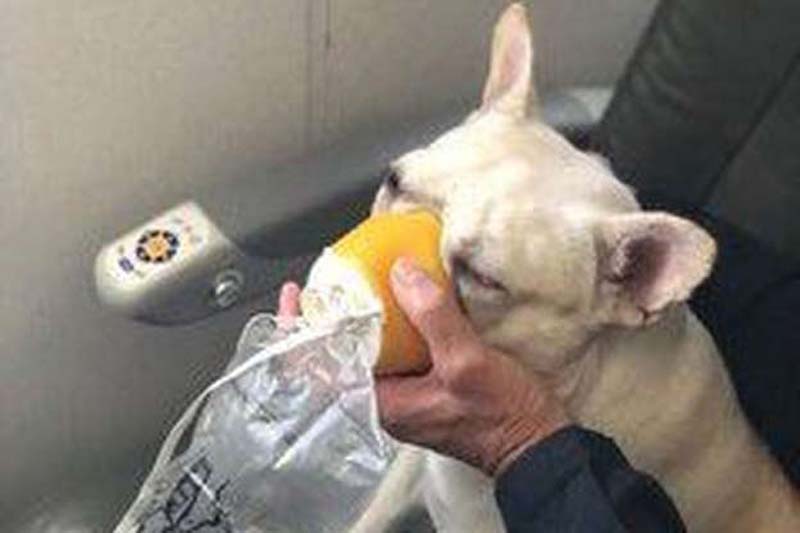