Behold, the museum of food which is a curation of food and scents of five countries of the world as paths converge in the neighborhood of Kh...

Behold, the museum of food which is a curation of food and scents of five countries of the world as paths converge in the neighborhood of Khirkee in Delhi.

Rains in Delhi is like a delightful sojourn- a fleeting moment of respite, that one often celebrates over chai and pakode. On one of these monsoon days, in the rain-soaked neighbourhood of Khirkee, a different kind of scent wafted in the air.

Beyond the puddles of water and the multicolored web of alleys, at the Bosco Centre by UNHCR, a group of women who fled war and instability at home—Iraq, Afghanistan, Congo, Nepal, Somalia-- have gathered. They have set up food-stalls in this 'pop-up' kitchen, a kind of a temporary arrangement. This is the second one of its kind after the one held at the Kiran Nadar Museum of Art.

When you enter the premises, you are greeted by an Afghani man with deep blue eyes . He half smiles, and points a finger towards a flight of stairs going down. While climbing down the stairs, an exotic set of food scents that you hardly recognize, strike you — and pique your temptations. 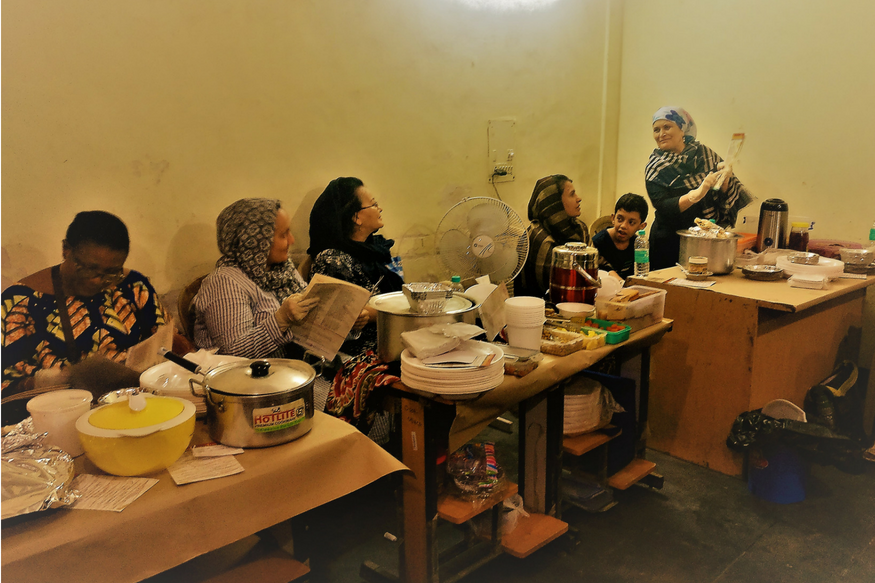 The chefs for the evening, who hail from five disparate countries, are each other’s next- door neighbours in Delhi's Khirkee area. A Somalian resident grins broadly as she serves a dallop of Somalian Burkh with sauce and chicken. “Paanch saal idhar,” she mutters, with an accent that is not often heard in the capital city of India.

[post_ads]An artist couple, 40-year-old Sreejata Roy and Mrityunjay Chatterjee of arts collective Revue, are responsible for this “Museum of Food: A Living Heritage”. For them, it all started with the idea of documenting lives of women in narratives of food, culture and frayed strands of history.

The complexities of a multi - ethnic society has made Khirkee a flamboyant centre of food, flavours and heritage. “The food culture here is forever in flux,” said Roy. The pop-up kitchen is an attempt to “connect the mothers of these young adults in the neighbourhood with one another.”

These monthly pop-ups is a result of an organic process of discovery and rediscovery that happens during impromptu culinary jams at the “Living Lab”, a veritable one-bedroom apartment in Khirki. “We have a theme or ingredient for each week, and each day cuisine from one of the cultures is cooked at the Living Lab which then everyone eats together. A lot of local participation is a part of these efforts,” said Roy.

[post_ads]The couple has been involved with the multi-ethnic neighborhood of Khirkee for more than a decade now. It has resulted in food-maps, blogs and magazines, particularly by women residents. At Bosco, a pile of thin and glossy copies of 'Khanapados', which is one such food magazine, is kept on a red chair. The guests pick up a copy each. The current issue revolves around the ‘nuskey’ from grandmothers’ kitchen- comprising of traditional anecdotes that were passed from generation to generation to these women of seven different countries.

In the words of Roy, “The idea is to create an online museum of food through archiving recipes, traditions around eating, and other things like songs about food.” She hopes it also helps migrant women “adjust in this different land and to earn a livelihood,” as a lot of these women have no or minimal source of income.

At this edition of Pop Up, with language barriers between the chefs and the guests, conversation is considerably scattered, filled with moments of deep comprehension and is eventually limited to transaction of food.

It’s intriguing to wonder how these women converse with one another in such a situation. The answer, however, lies in the neatly decked tables of cuisines from five countries that are almost like a relic of their heritage. It tells us that magically enough, these women speak in their own unique syntax — the language of food.

A Congolese woman quietly places a small scrap of paper in front of her, at the counter. It reads: ‘Rice made with dried fish and shrimps with potato’. She then lifts the lid of the dish and smiles and says, “Tasty.”
[post_ads_2]
Roy tells us of innovative ways devised by the women in the community kitchen, “A lot of it is digitally aided. For instance, the Congolese women type on the phone in French which I translate to English with Google Translate and relay it to other women,” Roy said. Lately, some Afghani women have started learning a little bit of Hindi and English at Bosco. However, communication for them largely thrives on facial expressions, the universal language of the stove and “an emotional connect” to understand one another.

And just like that, food becomes the conduit to their hearts — with deeper conversations about personal origins often manifesting into painful narratives of displacement, migration — and the burden of nostalgia that comes with it. 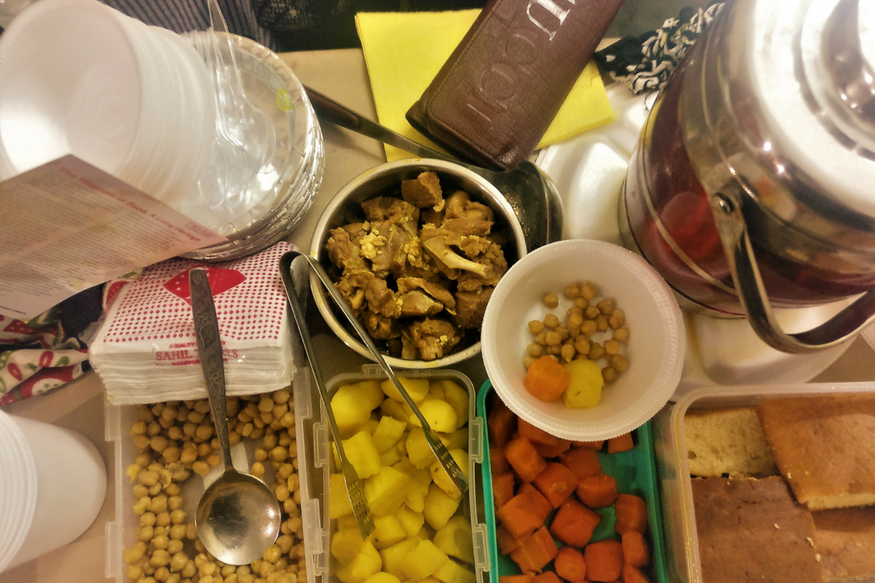 Sometimes, conversations tip over to the other spectrum of life in a foreign land — the stifling isolation that comes with being immigrants —of being ‘outsiders’. Food then becomes a common thread that entwines the fate of these women as they try to locate and adapt to new food habits. “Sometimes it is something as simple as the absence of certain native ingredients or maintaining healthy diets,” said Roy.
[post_ads_2]
“It’s nice to have friends. It’s a happy distraction that helps us forget the uncertainty of our existence,” said one of the Afghani women as she plops a piece of saccharin sweet Baklava on a plate. The supply of Shawarmas at her counter is diminishing quickly, perhaps because of the familiarity of people with the dish in the city.

Her little wide-eyed boy smiles ruefully from a corner as she talks about how she learns a lot of Hindi from him. Just like him, several of these women’s children attend school and tuition classes in the neighbourhood and have mastered speaking fluent Hindi.

The walls of Bosco are decorated with beautiful art murals that are painted by many of these young children. As everyone cowers at their favorite stall in a bid to taste this fresh palette of flavors, the rain outside continues to patter its strange song.

A young woman in the crowd whispers to her friend, “This is magical,” and merrily munches on her portion of Afghani pulao. On the other side, a quiet smile on the face of a Somalian woman as she humbly accepts the payment for another plate, is perhaps an indication that she too feels the same. The magic. 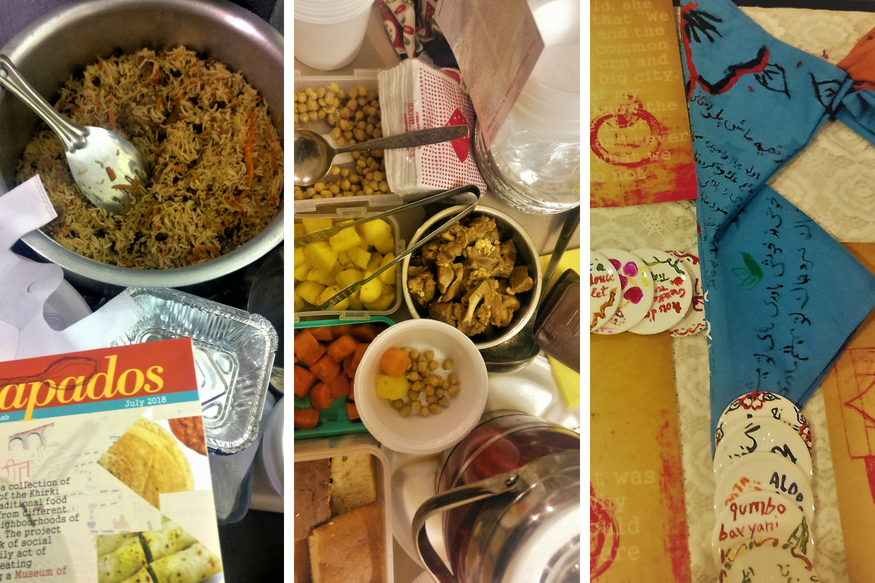