Contributor Content A homeless man, who stood on a roadside handing out resumes, has been flooded with job offers after a tweet about h... 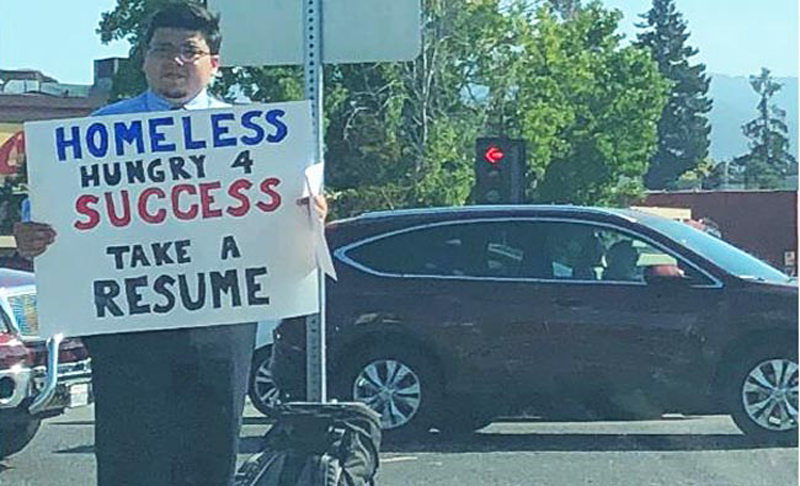 A homeless man, who stood on a roadside handing out resumes, has been flooded with job offers after a tweet about him went viral.

Dressed in a nice shirt, pants and tie, web developer David Casarez stood on the street with a handwritten placard that read "HOMELESS, HUNGRY 4 SUCCESS. TAKE A RESUME." Little did he know, he was on his way to going viral.

"Google reached out to me," the 26-year-old told New York Post.

"A product manager from Bitcoin.com was wondering if I could work remotely or if I want to relocate to Tokyo," he added.

Mr Casarez, an information systems management graduate, has been living in his car for over a year. He had freelanced in web design and logo design jobs earlier.

He had also qualified for an interview at Apple in January but claimed the job had been filled internally.

So on July 27, Mr Casarez woke from his park bench in Mountain View, California and stood by the roadside with his placard, reports New York Post. He even dressed up in order to look presentable to his future employers.

"It was basically a make-or-break moment," he said.

Things took a turn when a driver, Jasmine Scofield, asked to click his picture and post it online, reports People.com.
[post_ads_2]

Today I saw this young homeless man asking for people to take a resume rather than asking for money. If anyone in the Silicon Valley could help him out, that would be amazing. Please RT so we can help David out! pic.twitter.com/ewoE3PKFx7


Since being posted on Saturday, the tweet about Mr Casarez has received over 2.1 lakh 'likes' and more than 1.3 lakh retweets.

I just got off the phone with David. We spoke for about an hour. He came to the Silicon Valley with a dream to be successful in tech and has a lot to offer the community. He’s sleeping in parks & still trying to get freelance work, interviews, and applications in.


Less than an hour later, he tweeted: "Google, Netflix, LinkedIn, and many other companies have already reached out."

"It's been happening very quickly, and I'm in shock," Mr Casarez told New York Post. "I wasn't expecting that kind of response," he added. "It kinda blew up."

Thank you all for the overwhelming amount of support you have given me! No amount of good deed on my part could ever repay that debt. I am responding to each and every one of you who have come across my inbox with a carefully crafted response. Thank you for the support!


Mr Casarez's story has touched a chord with many online. "We can make this world a better place by helping one another. Am just so happy for him even though I know him from nowhere," a Twitter user posted. "I've been on Twitter for some time now and this is one one my favorite threads," says another.