He found 15 books in a Sierra dumpster. Then he found out they belonged to Thomas Jefferson.

© Courtesy of Max Brown via MCT In this und...

In December 2014, Max Brown was picking through an Incline Village dumpster for a community service project when a collection of 1980s cassettes caught his eye. Fancying himself a collector, he pulled them out and inspected them.

Then he noticed the substantial pile of worn books buried beneath them.

Then it started raining.

Quickly, Brown grabbed about 15, all he could carry, and left, narrowly avoiding the snowstorm that was to blanket the area that night and ruin the books remaining in the dumpster.

[post_ads]It wasn't until six months had passed that Brown offhandedly bent back the cover of one of the books and saw "from the library of Thomas Jefferson" inscribed on the open page.

Upon reading those six words, Brown became a detective, beginning an archival search for answers that would span three years of his life, 220 years of the country's, and connect the hands of an American founding father to his own.

Brown reached out to an appraisal expert to see what they could tell him about the books' potentially presidential origins. After some weeks the appraiser got back to him. The signature in the book did not resemble Jefferson's. The books were fakes, the expert said.

Brown accepted the conclusion and moved on.

But when watching a random "Pawn Stars" episode months later, Brown saw a book - with a cover that seemed to match two of the texts he had found - lauded as a legitimate relic of Jefferson's. He resumed his research, reinvigorated.

After Google searches and Library of Congress inquiries, Brown discovered records suggesting that Jefferson had purchased copies of two of the dumpster-found books in 1818 and had rebound them with a new cover.

And what were these ancient, influential tomes? The second and third volumes of Pierre Charron's "De la Sagesse," a 17th-century meditation on morality and wisdom.

More clues emerged. Jefferson had a distinctive pattern of initialing the pages of his personal books, and sometimes inserted the first page of a text into the middle of the book while rebinding it. Both idiosyncrasies were present in Brown's books.

Brown shared this information with Endrina Tay, a staffer at Jefferson's presidential library. Brown wasn't completely honest with Tay - he didn't divulge the dumpster provenance of the books because he thought he wouldn't be taken seriously. Instead, he said he had inherited the books from his family.

After an email correspondence, Tay concluded that two of the books Brown found were indeed Jefferson's own, Tay said.

But just as much as this revelation gratified Brown, it frustrated him. He had auctioned off the volumes in question months earlier, before he knew the full extent of their value, when money had been particularly hard to come by.

"Eight-thousand dollars seemed like a lot at the time, but it's nowhere near the value of American history," Brown said.

Even while kicking himself for selling something priceless, Brown couldn't shake his Jefferson obsession. Two new questions nagged at him: How had Jefferson's books moved cross-country from Monticello to Incline Village? Why had they been thrown out?

It took Brown two more years of sleuthing.
[post_ads_2]
He managed to map the books' ownership from Jefferson's 1818 purchase almost to the present day. By the turn of the 20th century, the books had been incorporated into the collection of the well-to-do Kellogg family. Brown realized that all the other books he had found in the dumpster that day, including some photo albums, were likely theirs.

The Kellogg collection remained in the family for generations, and Brown traced Jefferson's books up to 1976, when a Kellogg descendent named Violet Cherry last registered them in her collection. After Cherry's passing, the trail went cold, Brown said.

On July 17, Brown reunited some of the books he hadn't auctioned or sold on eBay with one of Cherry's living relatives, who recognized members of her family in the photo albums. She and her family were completely unaware the albums had existed, Brown said, and were grateful to have them back.

Although Brown missed his chance to own a piece of American history, he said he's glad, in the end, a piece of one family's history was restored. 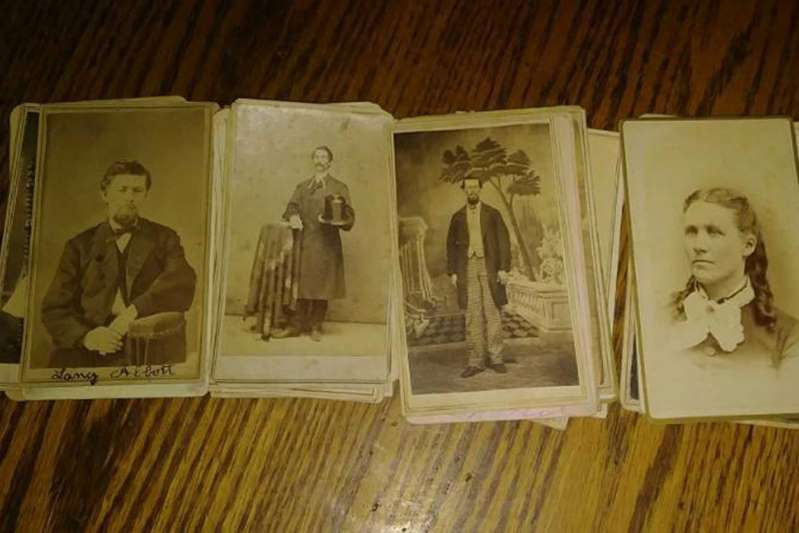