Have you heard the singing school custodian? 'I haven't been booed yet'

During the lunch hour at Three Trails Elementary School, head custodian Alo Key wipes down the tables and then pulls out his guitar.

"You guys are gonna sing with me, right?" he asks the summer school fifth-graders at the Independence school.

[post_ads]The response is bashful at first, but as Key's smooth, soulful voice brings the cafeteria to near-silence, his audience can't help but join in for the chorus.

Ed Sheeran, Justin Bieber, music from The Greatest Showman. Key plays some of the students' favorites, then slides into an R&B mash-up of Sam Cooke and The Drifters. He throws an original song into the mix.

Key, 36, has only been head custodian for a year. He's been singing since childhood.

Growing up, his father "groomed" him and his siblings into being a part of his band, "whether we had a choice or not," Key laughs, good-naturedly. "We'd want to go outside and play but we'd have band practice."

Then in high school, Key got his first taste of the music business when he, his older brother and two cousins went on a two-year tour in Europe. They were signed by an Austrian company that had the group singing "techno-pop." It was the late '90s. Key figured the company was going for a Backstreet Boys feel.

In the late 2000s, he began uploading his songs to YouTube. Today, his videos have 1.7 million views.

"Man, I've been singing pretty much all of my life," he said.

He has sung in Kansas City's Blue Room. He has sung with Spawnbreezie, another artist from Independence who has made a mark in the music industry. And now he gets to sing for his students.

"They're a good crowd. I haven't been booed yet," Key jokes. He said the students are surprised when they find out he can sing.
"They're like, 'Whoa, Mr. Alo, you sing?' It just kinda tickles me a little," he said.

But Key does more than sing. He's formed relationships with his students and gives them high-fives around the halls. After just one year at Three Trails, he was awarded "Employee of the Year."

"He's just not like a janitor or someone who cleans up your stuff," said fifth-grader Makayla Marshall. "He's also a friend to all of us."

Key is all over the building during the school day, so the students see him often and have been able to connect with him personally, fifth-grade teacher Heather Buckner said.

"He comes to work with a smile on his face and carries that positive attitude throughout the entire day," she said. "We are all about building relationships in the building, and he is one of the key players."

Relationships are also important in Key's personal life. After a three-month tour around New Zealand and Australia in 2015, he decided to take a job as a substitute custodian in the Independence School District, and in 2017, head custodian at Three Trails, so that he could spend more time with his wife and five children.
[post_ads_2]
One of his original songs, "She Has My Heart," dedicates each verse to a different woman in his life: daughter, mother and wife.

"She has my heart," the chorus begins. "I think about her every night and day. No one has ever made me feel this way. Her smile alone just brightens up my day. She has my heart."

The original song is one of fifth-grader Elijah Kenyon's favorites that Key performs, tied with "A Million Dreams" from The Greatest Showman. And Key has a place in Elijah's heart.

"He's like a part of my heart because I just love music and he's making my passion for music even bigger," he said.

This summer Key will be releasing a new single and posting weekly Music Monday videos to his YouTube channel. You can find his music on iTunes and Spotify. 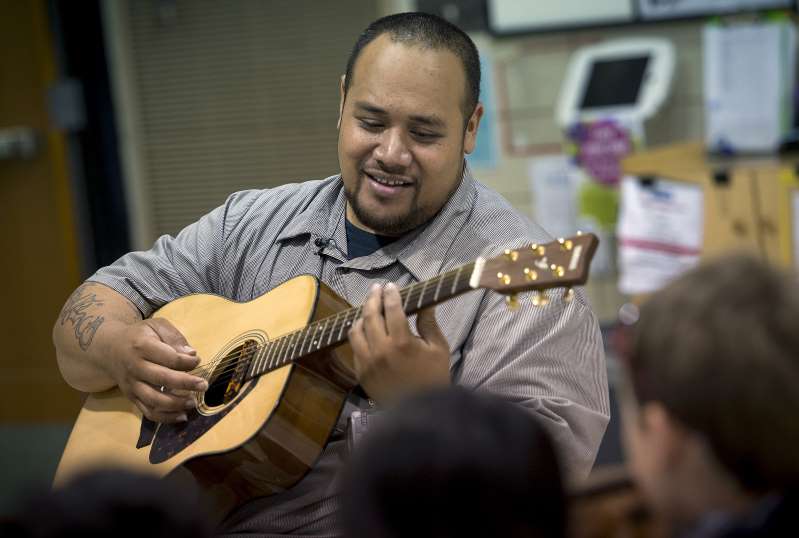