© WNEM 17270552-g.jpg By Rebecca Bratek, CBS News A young girl in Michigan is turning lemons into more than just lemonade -...

A young girl in Michigan is turning lemons into more than just lemonade -- she's helping local veterans, too. Samantha Stricker has raised more than $2,000 for the VA hospital in her hometown of Saginaw, CBS affiliate WNEM reports.

The 12-year-old, who goes by Sammie, started hosting an annual lemonade stand four years ago after her mom showed her a story about a local soldier who was hurt and hadn't yet received all his benefits.

"At first I was going to keep the money for myself but then I thought about all the people who have so much less than me," Stricker wrote on her GoFundMe page. "So I decided to take action and make a difference."

The first year, Stricker raised about $150. The year after that, she took in just under $500. Last summer, she set the bar a little higher and donated about $1,500 to the hospital.

[post_ads]And just last week, the young entrepreneur crushed her goal, raising just over $2,100 for local veterans. Stricker presented the funds to the hospital on Wednesday, which will be used for patient supplies.

Stricker asked for $1 for each cup of lemonade, WNEM reports, but her customers were a lot more generous.

Stricker's mother, Kelleigh Stricker, told CBS News the Saginaw community has "really embraced" her daughter's stand. This year, the 12-year-old had local sponsors, which helped offset the cost of supplies. The local fire department even stopped by.

The young girl sold about 54 gallons of lemonade last week, her mom said.

Stricker's GoFundMe page is still active, her mom said, but all funds donated through the fundraising site will be counted toward next year's total.

"We think it's incredible," Ted Froats, the public affairs officer for the VA hospital in Dayton, Ohio, wrote on Stricker's GoFundMe page. "You are already making a huge difference in strangers' lives at such a young age -- you are going to go far in life!" 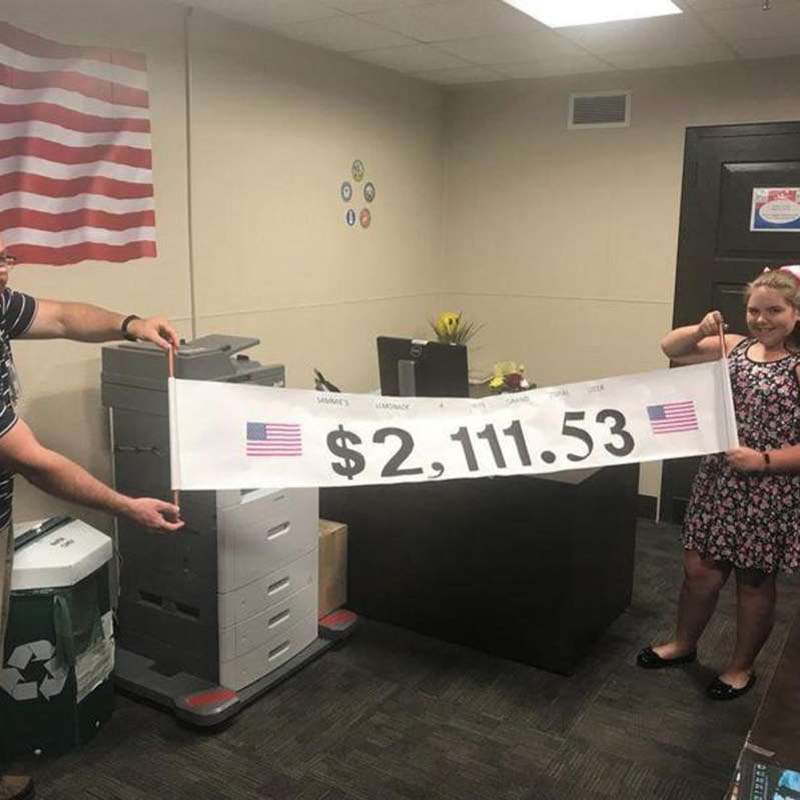