Kheris Rogers endured years of bullying. But the Los Angeles 11-year-old was lucky to find support and empowerment from her big sister. The two decided to turn their bullying takedown into a fashion business – and it's booming.

"She sold well over 10,000 shirts and that's amazing for an 11-year-old, and it's only been about a year," Kheris's sister Taylor Pollard said.

[post_ads]"So flexin' in my complexion means to me that, it doesn't matter what other people think about you, it's what you think about yourself and you don't let anybody tell you different," Kheris told CBS News' Jamie Yuccas.  The bullying began back when Kheris was in first grade. Kids called her "a dead roach" and asked if she'd been "in the oven too long." One day her teacher asked the class to create self-portraits, then handed Kheris a black crayon. The other African-American students were given brown. Her mom moved her to a more diverse school but her darker complexion continued to isolate her.  She was punched and threatened.

"So one day she was taking a bath and that's when she expressed to me that she wanted to stay in the bathtub longer in hopes that her skin would get lighter," Taylor said of her little sister.   She decided to act and posted a picture on Twitter, writing, "my sister is only 10 but already royalty", adding #FlexinInHerComplexion – a saying their grandmother used to let the girls know they were beautiful.
"The next day she said, 'Oh my God, you're viral.' I was like, 'What!' And mom was like, 'What's viral? What are y'all talking about?'" Kheris recalled.

"It was up to almost half a million likes and she had just as many retweets on Twitter," added Taylor.
[post_ads_2]
As Kheris put it, she "broke the internet."

Taylor suggested they put their slogan on shirts and sell them online. Soon, Oscar-winning actress Lupita Nyong'o and singer Alicia Keys were wearing their shirts. Even rapper Snoop Dogg posted about Kheris on his Instagram.

Last September, Kheris became the youngest designer ever to participate in New York's Harlem fashion week. When the young CEO isn't struggling to keep up with the demand for her fashion line she tries doing "normal" 11-year-old kid stuff, like going to camp.

Asked what she sees when she looks in the mirror, Kheris said, "I see black beauty. I see melanin popping. I see anything you can think of." The sisters are certainly appreciative of the financial reward, but for them, success isn't in the money, it's in the message.   "It's changed like how other people feel about themselves. That's what I like to do, making sure other people are happy," Kheris said. 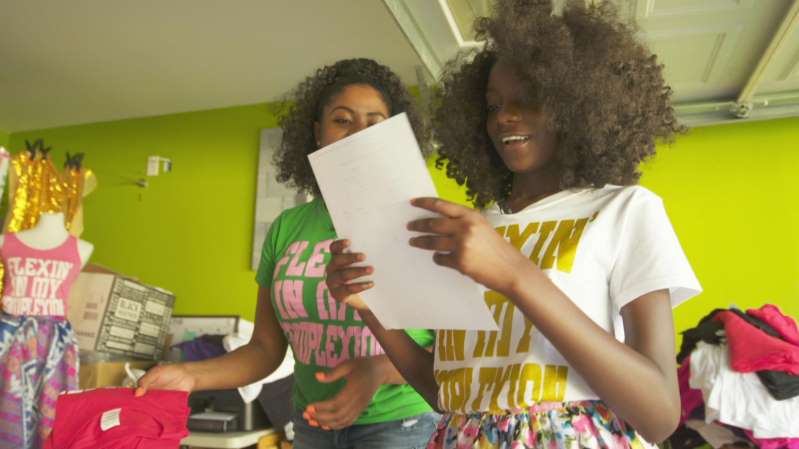