© Melissa Work/Facebook By Christina Zdanowicz, CNN When a man had a heart attack while laying sod in his front yard, first ...

When a man had a heart attack while laying sod in his front yard, first responders not only saved him, but they also finished the job for him.

[post_ads]Gene Work of Pasco County, Florida, was racing to get the sod down Saturday to avoid getting a fine from his homeowner's association, his wife, Melissa Work, wrote on Facebook.

"While he was having his heart attack, literally in and out of consciousness, he kept begging me to figure out the sod and have it put down because he didn't want it to go to waste and die," she wrote. "It's ALL he kept asking about literally during a massive heart attack."

Firefighters arrived and took the man and his wife to the hospital. Melissa Work's brother-in-law stayed behind to work on the last four palettes of sod.

As he finished removing the old grass and started installing a few rows of sod, he heard the roar of engines.

A firetruck and an ambulance pulled up and seven firefighters jumped out, ready to help. They said they came back to help because they "knew Gene was in serious trouble" and wanted to make sure the sod didn't die, Work wrote in her post.

Pasco County Fire Rescue confirmed the good deed in a Facebook post of its own and wished Work a "speedy recovery."

"We believe in helping the community whenever we are needed, and recently the crew from Station 10 (A-Shift) did exactly that," the post read.

His wife was overwhelmed by the kindness of the crew -- they went beyond the call of duty.
[post_ads_2]
"They saved his life, dropped him off and then cared enough to save our GRASS!!" Work wrote.

"They didn't know all we have been through as a little family. They simply saw someone in need, something in need and did this for us. This wasn't in their job description." 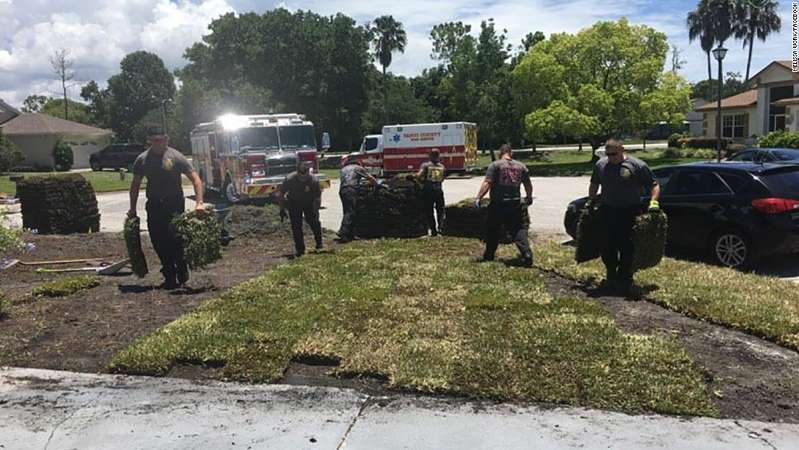