© Provided by CBS Interactive Inc. Petra poses with his new wheelchair -- and his old one next to him. By Christopher Brito, CBS News A ...

A Mexican-American soccer fan donated a wheelchair to a Russian man in desperate need of a new one during the opening round of the FIFA World Cup in Russia last month. His act of kindness went viral. California native Abel Vera, 44, who is paralyzed from the legs down and also uses a wheelchair, tells CBS News he is not a hero, but someone who is motivated to help others with disabilities.

[post_ads]Along with his best friend Marcos, Vera tries to attend every World Cup. On these trips, the men make it their mission to help a local in the country by gifting a wheelchair.

"We did go with the intention to go to the hospital or an orphanage," Vera said. "We never in our wildest imaginations thought it would go viral."

During a fan event at Red Square in Moscow, Vera observed a young Russian man struggling with a broken down wheelchair.

"The wheelchair had no tires, [it was] falling out," Vera said. That's when he told Marcos: "That's the kid."

The pair approached him, but faced a language barrier since neither spoke Russian. Petra, as he called himself, also didn't speak English.

"We downloaded an app to help translate, but the reception wasn't great," Vera said. "So we did some sign language and pointing, showing pictures."

When they displayed a photo of a wheelchair and Marcos pointed to Petra's chest, his eyes lit up, according to Vera.

"It's one of those faces you'll never forget," he said. They then arranged a date to meet before Vera's scheduled departure from Russia.

Days later, while waiting for Marcos to get water on a "super hot" day, Vera was befriended by a Russian journalist who grew concerned that he was dehydrated in Red Square. The two spoke about Vera's outreach work -- and eventually, the wheelchair exchange between him and the stranger led to a segment on a television program and later to other Russian news outlets.

Vera said the experience was "overwhelming," considering the amount of positive attention an American received in the most unlikely of places. And even before the good deed was publicized, he was surprised how accommodating the people of Russia were to him.

"I love the Russians and the people," he said about his trip. "Whatever's going on between the countries, I'm just going as a fan. Just the way they escorted me. Citizens would help."

For almost 20 years, Vera has learned to live using a wheelchair after a car accident left him paralyzed. He loves the "sport that has given him everything" and even though he has a day job as mental health specialist for the state, he also coaches youth soccer teams. He's well-aware of his limitations, but also cognizant of possibilities to "move forward" in life.
[post_ads_2]
"I travel. I have a child. I got to pick up a graduate degree," Vera said. "I want to also reaffirm people. There's a lot of resources out there with disabilities."

Vera started a nonprofit, What Pushes You, after his friend suffered a motorcycle accident. Since then, he's driven to help people with disabilities any way he can, including his new friend in Moscow.

"The main thing I focus when I see him rolling away. How much easier he's flowing," Vera said. "That look. Just seeing that kid enjoy himself. I've done more in four wheels than I have with two legs. I want to do more of this." 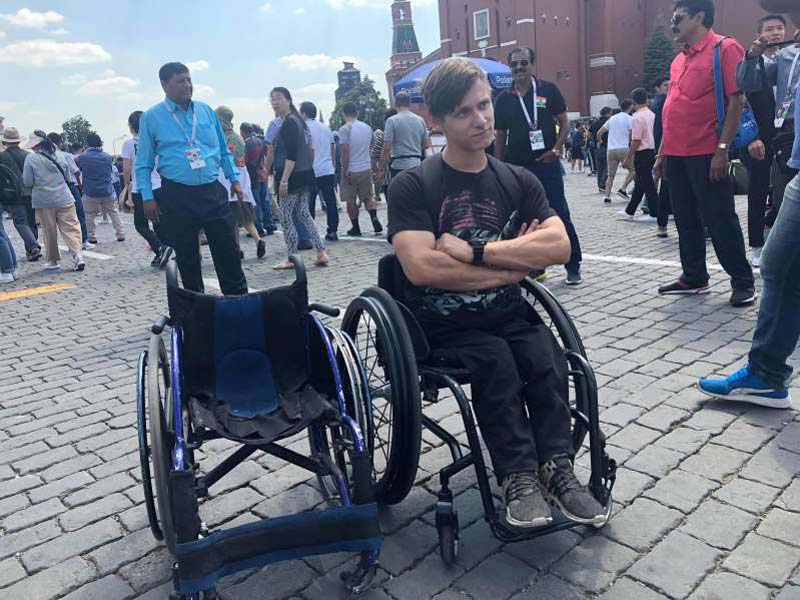