© WFAA New York Daily News A Texas high-schooler who lost her valedictorian spot because of an alleged error in calculating s...

A Texas high-schooler who lost her valedictorian spot because of an alleged error in calculating student rankings is going to college with a little help from hundreds of anonymous friends.

A GoFundMe account set up to help Destiny Brannon of DeSoto High School in eastern Texas has received over $40,000 in donations in just 10 days from more than 300 people to help fund her first year of college at the University of Texas at Austin.

[post_ads]“I was very surprised and very grateful,” the soon-to-be college freshman told the Dallas Morning News. “I never expected it to get like that.”

Brannon went from first to fourth after school administrators claim they make a mistake in figuring out which student would be class valedictorian and subsequently lost her scholarship to the college - which offers bright young minds from Texas public schools their first year free for achieving such an honor.

But Brannon and her mother, Samantha Johnson-Brannon, believe that she was stripped of the title by her school because of her graduation speech. In the convocation, Brannon criticized DeSoto Independent School District for valuing athletics ahead of academics, according to the newspaper. The district has denied this claim.

Since the scandal, Brannon has posted some of her feelings on social media, saying it was “irritating… to see people who you thought were friends say negative things or little smart comments.”

“Just because I was the one going public about it doesn’t mean ‘I was only doing this for money,’” she tweeted last week. I feel the way I feel and I’m absolutely NOT proud to have been a part of Desoto ISD.

But the teen said that the messages of support and encouragement she’s read on her crowdfunding site have been “overwhelming.”

“And it made me realize that even though there’s bad, there’s way more good people out there, supporting me throughout this,” she posted. 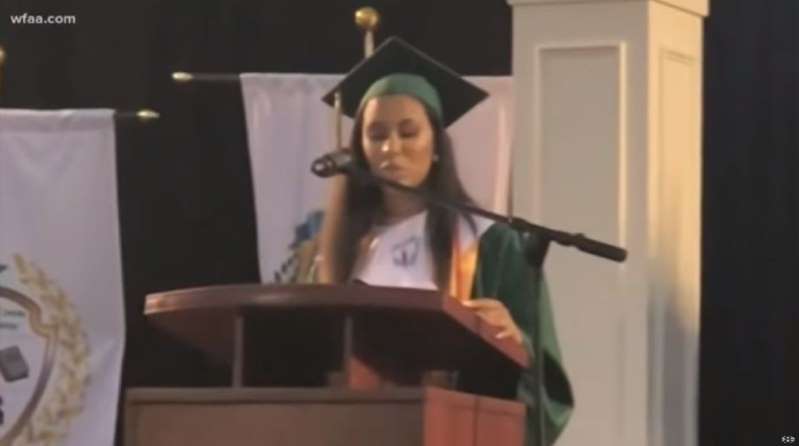