The kids couldn't be stopped.

Bubble wrap laid out on the floor burst in loud pops under the tires of kids zooming by in motorized cars outfitted with harnesses and joysticks Saturday in a downtown Northwestern University office.

[post_ads]While a 2-year-old girl waved to her family from her hot pink car, students from Northwestern cheered her on as she navigated the obstacle course's twists and turns.

The cars had been modified for a handful of kids who have difficulties standing or walking independently, to give them a chance to be mobile and independent.

A little over two weeks ago, transformation of the cars began.

On Friday, huddles of Northwestern students studying physical therapy and engineering tested the cars' speeds, took measurements and mapped out the necessary modifications.

The Feinberg School of Medicine and McCormick School of Engineering students were collaborating on a project for the course Clinical Management of the Complex Patient, which offers various hands-on workshops.

The workshops focus on a range of topics from pediatrics to women's health. This is the first year students have modified the motorized cars that will be donated to the kids as part of the pediatrics series, said Jennifer Kahn, a physical therapist and the course director.

"We can teach them everything on paper, everything on a PowerPoint, but to really have that interaction with the kids gives them a whole new skill set," Kahn said.

The five kids receiving the modified cars were referred to the class by various organizations, including Lurie Children's Hospital, and physical therapists.

Earlier this month, Spencer Oswald whizzed around the room strewn with pool noodles and tape measures in a shiny black car by using his chest to lean against a large button affixed to the steering wheel.

"That's awesome," said Ryan Oswald, who watched his son Spencer try out the car for the first time. "It's been tough to have things that match what he can do. It'll be a great way to match where he's at cognitively and physically."
[post_ads_2]
For Spencer, who can't walk or crawl, the modified car is the latest in a string of studies and therapies his parents have tried as they struggle to find a diagnosis for him.

With two older sons, Theresa Oswald knew what a typical 6-month-old should be doing. But by the time Spencer reached that age, he hadn't attempted to crawl. So the Oswalds began to seek treatment.

"He's been doing therapy ever since," Theresa Oswald said. "We've seen a lot of different doctors, and no one really knows what to do and they don't even know who to send us to next."

And his parents have seen it make a difference, they said.

Just a year ago, Spencer couldn't sit up on his own.

"He was really comfortable laying on his back," said Jessica Trenkle, Spencer's early intervention physical therapist, who recommended him for the car project.

It was a challenge Northwestern students tried to tackle in a previous research project when they created an adaptive 3D-printed seat that helped him do just that.

Renee Hensiek, a second-year doctorate physical therapy student, worked with Spencer then and also participated in the "Go Baby Go" project.
"Now to see him, he sits and he's ready for a car," Hensiek said. "It's cool to see all the different aspects of therapy come together."

"They're willing to try anything," Theresa Oswald said of the students. "They don't have any particular idea in their head about what is going to work, because they haven't done anything before, so it's been a really good opportunity, and I like to see how the students have progressed as well."

Alison Wang, a dual-degree student majoring in physical therapy and engineering, said the modifications for Spencer's car included a range of possibilities, like adding a harness, moving the steering wheel closer and rewiring the car's electrical circuit to be controlled by a large button rather than pedals so it would be more intuitive for Spencer to drive.

The technical details were secondary to the fun Spencer was having Saturday. After helping add stickers depicting flames to the side of his car, he tentatively pressed the big red button as he summoned it to life with a jerky start.

"Especially for kids with disabilities, a lot of it is play," Wang said of working with kids.

For some families, the project fulfilled a financial need as well as a medical one.

At 6 months old, Stevie Browning was diagnosed with type 1 spinal muscular atrophy - the most severe - and was predicted to live between eight months and two years, said his mother, Samantha Angell.

Now, Stevie is 2. He can't walk and needs support sitting up, and Angell said she hopes to get him a wheelchair he can control himself.

But their Medicaid health insurance denied their request for a motorized wheelchair, citing that Stevie didn't understand the concept of cause and effect well enough to operate one.

Angell said she was heartbroken when she heard the insurance company's response. But she hopes the modified car will be a way to prove that Stevie is more than ready.
[post_ads_2]
"We don't have enough money to buy our own wheelchair and to practice it ourselves, and this is just the perfect way to show them that if he can drive this car, he can drive a wheelchair," Angell said.

Stevie tentatively closed his fist around the red ball of the joystick Saturday and pushed. His eyebrows raised when the car, outfitted with a neck brace, harness and cup holder, moved to his command, jolting forward.

Bill Angell, Stevie's grandfather, said seeing Stevie and the kids test out their cars Saturday brought tears to his eyes. Rather than just watching others play, now they'll be able to join in.

"The inclusiveness is so important for these kids," Bill Angell said. "It gives him freedom." 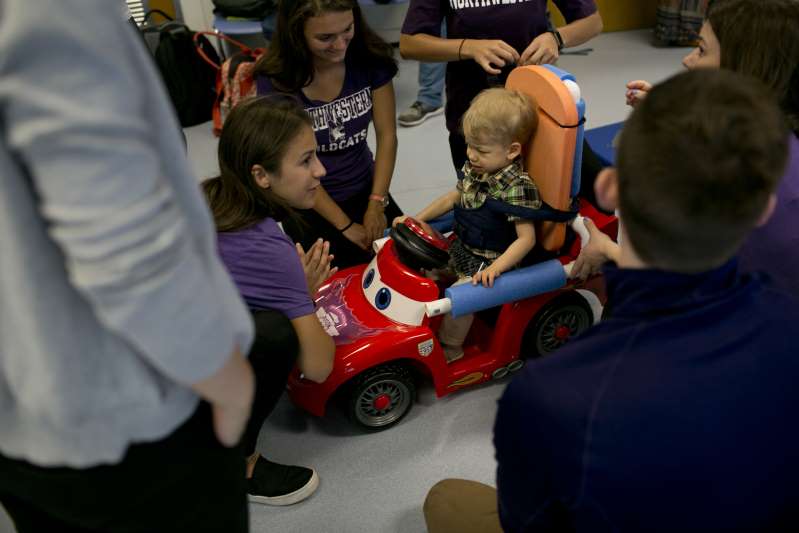