© Provided by CBS Interactive Inc. By Samantha Williams, Inside Edition It was a birthday present Rick Darge will never forg...

By Samantha Williams, Inside Edition

It was a birthday present Rick Darge will never forget, and he is paying it forward.

[post_ads]Darge’s rat terrier mix, Maya, ran away from home a few days before his birthday, but the film director had no doubt in his mind that his 9-month-old puppy was safe.

A GoFundMe page he created reads, “Maya means magic and that’s what this dog is.”

A homeless man named James, known on the street as “Canine” for his love of dogs, had been given Maya by another homeless man, who found her near Darge’s East Hollywood office. James had recently lost his own dog a week prior.

James took Maya's harness off and realized she had a tag with her owner’s phone number on it, but he did not have a cellphone to make the call.

The next day, James found a nearby phone and dialed Darge, telling him he had Maya.

“I can't truly express the emotions I felt when I finally got that call,” Darge said on GoFundMe. “I could feel the warmth of James' heart through that conversation.”

Because James understood the heartbreak of losing a dog, he told Darge he was devastated knowing Maya belonged to someone.

When the happy owner retrieved his puppy, he offered James $200, but he refused to accept the money.

“He just wanted to get her back to the person who loves her the most,” Darge said in the post. “It was all about love for James.”

After many attempts, James finally complied and accepted the money with tears.

“This was a redemption day for him to do the right thing. To be the hero,” the page reads. “I felt it. He felt it. We all felt it. It was so powerful of a moment. With tears in his eyes, James told me to pray for him.”

As a result, Darge, who was celebrating his birthday, said his way of praying for James was to start the GoFundMe page to raise money for the man who found and returned his dog.

“I think in James' mind we will never see each other ever again,” he wrote. “I have other plans in mind.”

Out of a $10,000 goal, the page has raised over half since being posted on July 9. Darge said he deserves every penny.

“This entire 36-hour ordeal from separation to reuniting showed me just how much love is amongst all of those around me, both near and far,” the page reads. “I love you all and thank you for giving me the best birthday present ever. You gave me hope. Now let's give some of that hope to James.”
[post_ads_2] 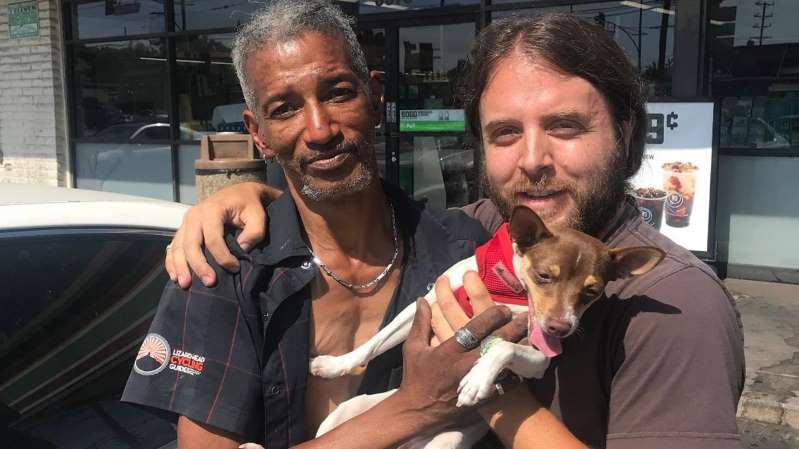