Matt Ward will be the first to admit — and with a broad grin on his bearded face — he was "a good guy but a bad kid" who put his family through hell during a few rebellious years at West Aurora High School that eventually got him sent to "reform school."

Now 29, the affable tattoo artist eventually got his act together.

And what an act it is.

[post_ads]He and brother Ryan are the veterans on the Chicago Bulls "Benny and the Elevators" stunt-dunking team, which dazzles halftime crowds with their high-flying trampoline maneuvers that combine gymnastics, acrobatics, tumbling and good old basketball skills.

The genesis of these daredevil careers: their childhoods in Aurora, where they grew up in a big family in a small house near Greenman Elementary School on the city's West Side. The backyard really was "our playground," said Matt, where long afternoons were spent hanging from swing sets, walking across monkey bars and jumping from anything and everything high enough to give their parents Joy and Mike fits.

Both boys were in organized sports, but eventually got hooked on BMX bike competitions which, for Matt, was particularly satisfying because unlike team sports, "it wasn't someone telling me what to do ... I could do whatever I wanted and it helped me be free."

Their "tricking" and "kicking" went up a few notches when Hupp Skate Park opened at the corner of Orchard and Illinois in the mid-2000s. Matt says he would spend "hours, days on end" practicing jumps and flips. A couple of broken bones convinced Ryan to concentrate on ground acrobatics, where he didn't "have to worry about having control over another element." And it wasn't long, Matt noted, until his kid brother could "far surpass him in any sort of gymnastics."

Matt says he was a "straight A student" until he got into high school and "wanted to do my own thing." While he never got into heavy drugs, he admits to being in trouble with authorities on plenty of occasions, all of which put more pressure on his more studious, serious and "definitely more white sheep" little brother to be the role model for two younger siblings.

After that Iowa boarding school, Matt came home and started concentrating on his artistic side, eventually becoming a professional tattoo artist. His brother, on the other hand, earned a degree in psychology at the University of Illinois at Chicago, which is also where he began refining his skills in the school's gymnastics room.

Neither brother ever stopped moving, learning new tricks and techniques. But it was while practicing flips off a ledge at UIC, said Ryan, that Benny the Bull's girlfriend happened to walk by and, watching him in action, told him about the Elevators and their daredevil act.

Both he and Matt tried out for the team, and in 2013 the Ward brothers, self taught and each with their own distinct style, joined the eight-member squad that is part of the Bulls Entertainment Network.

Their mom Joy, part of West Aurora's team that won the 1979 United States Cheer Leading Association Championship, certainly understands the passion and work that goes into their stunts, and says she eventually hopes the duo will be able to find sponsors to reach that next level.

"It's amazing," she said, "what they can put together."

Performing at the United Center — not to mention side gigs locally, nationally and internationally — is obviously a high profile stint that has given them the chance to meet extraordinary people in pretty cool places. But it does not pay enough to support them, which is why Ryan is a bartender at a Gold Coast restaurant while also learning to make craft spirits in a distillery, and Matt works as a tattoo artist at Stained and Pained in Chicago.

While both have had their share of injuries, Matt has been hit the hardest — with nerve, back and ankle problems — "because he takes more risks," his brother noted. Age and injury, they realize, will limit their time with the Bulls group, not to mention extreme sports in general.
[post_ads_2]
Ryan, the neuro-science geek who thinks about the world "as a bunch of moving particles," wants to eventually get a Ph.D and work in a genetics lab specializing in aging. Heavily-inked brother Matt, on the other hand, thinks "in colors" and hopes to some day own a few tattoo parlors that will allow him to travel the world and get back into music, a passion he shares with little sister Lindsey, a part-time professional performer.

But in the meantime, "we both keep moving," said a determined Ryan Ward, "through life ... through obstacles."

"This," added his ever-smiling brother, "is our fun." 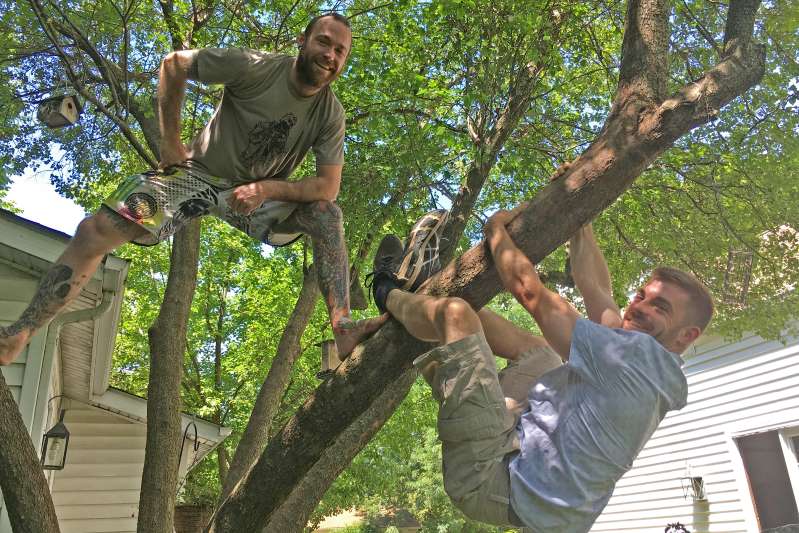