Animal rescuers in Britain responded to a bog where a pony had wandered in and became stuck up to its shoulders in a ditch. Photo cou...

Animal rescuers in Britain responded to a bog where a pony sank up to its shoulders and became stuck in the water.

[post_ads]The RSPCA said an animal collection officer responded to a report of a pony in distress at the Askham Bog Nature Reserve in North Yorkshire, England, and arrived to discover the equine had sank into a ditch in the middle of the bog.

Animal Collection Officer Leanne Honess-Heather attempted to lead the pony out of the bog using a head collar.

"Unfortunately, the mud was so silty it was having a vacuum effect on her legs, she thrashed around a little but she was unable to walk out. She was stuck fast," Honess-Heather said.

The officer contacted local fire departments and the Yorkshire Wildlife Trust, which owns the land. Acomb North Yorkshire Fire and Rescue's firefighters and an animal rescue unit soon joined Honess-Heather at the scene.

The pony was sedated by a veterinarian and the rescuers used slings and boards to hoist the animal by hand and carry it to shore.

"It was trapped in about four feet of brackish water, mud and reeds but other than that appeared to be in good health," said Colin Hunter, Acomb station manager at North Yorkshire Fire and Rescue.

"We were there for over an hour and a half but that is pretty good for an animal rescue such as this," Hunter said. 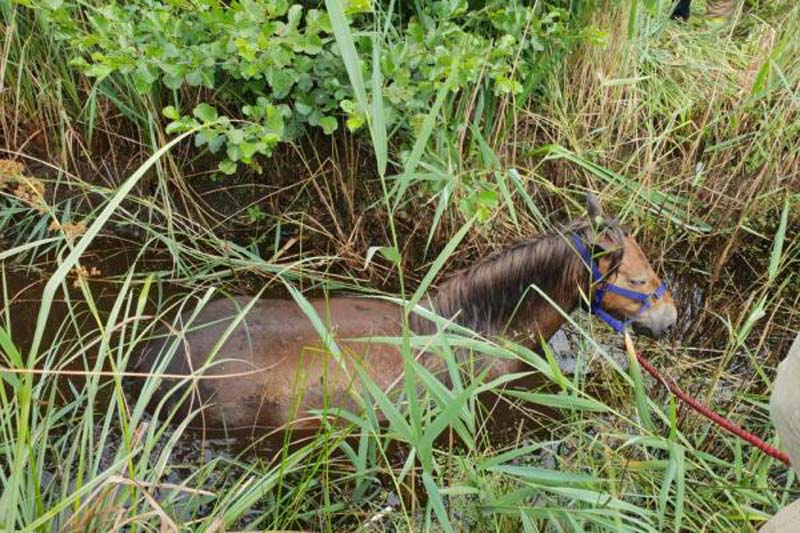