A tourist asked for recommendations in Boston. And social media responded — with kindness

© David L Ryan/Globe Staff /file 2016 A tour group on the Freedom Trail near the Granary Burying Ground in Boston. By Nestor R...

By Nestor Ramos, The Boston Globe

You don’t have to spend much time in downtown Boston this time of year to begin to feel the stifling weight of all the tourists.

[post_ads]They clog up the escalators inside subway stations and quack at you from marauding Duck Boats. They shuffle from one overbooked touristy feeding trough to the next like zombies: Look out, it’s the Walking Fed!

But even the most jaded observer of the tourist nuisance would soften in the face of Sam Riding.

To plan his vacation, the 30 year old, who will be visiting from Liverpool later this month, took to Reddit in search of off-the-beaten path recommendations.

“Greetings Proud Bostonians!” Riding began, before launching into a flattering comparison between his hometown and the city he will soon visit and asking for help planning his trip.

“I know it’s a big thing to give up your secret eateries and bars, but I swear I’m only there for a week and I won’t steal your favourite barstool from you,” he wrote.

The internet can be a rough place, and Reddit has a pretty high variance, from kind and helpful folks to straight-up nightmare fuel in its darker corners.

But Riding’s note was so earnest and complimentary and self-deprecating — “To be honest, I intend to quietly booo at Revolutionary War monuments, since us Brits are actually still super bitter over our rough break up in 1775-6,” he wrote — that dozens of great suggestions began pouring in. Hole-in-the-wall North End restaurants, North Shore clam shacks, advice about how not to be hit by a car — one person even successfully got Riding to reconsider his aversion to the Freedom Trail.

“You are hilarious and your enthusiasm for your trip is making me so happy!” one user wrote.

Riding’s appetite for all things Boston wasn’t just infectious. It was inspiring. How cool would it be to see our city through fresh eyes?

Reached by email, Riding was just as charming. He said he and his partner are fans of history and the horror genre — they’re heading up to Salem, too — and settled on Boston.

Boston, Riding said, is “just the perfect destination for my first proper holiday in six years.”

His hope in planning his trip, he said, was to steer clear of guided tours and obvious tourist traps.

“I don’t think it’s entirely unjust that tourists have such a negative reputation,” he said. “So many people get wrapped up in the temporary nature of their stay that they forget they’re surrounded by hundreds of thousands of other human beings, just trying to get on with their everyday lives.”

Riding said he thinks the key to being welcomed as a tourist is avoiding leaving that impression, and adding a touch of flattery.

“People often take a great deal of pride in where they live and it’s not unusual for them to want to show it off to visitors; especially when they’re respectful and courteous,” Riding said. And while he’s sympathetic to the occasional headaches caused by so many tourists, remember the reason they flock to Boston. Can you blame them, Riding said, “for wanting to share in a little bit of that brilliance?”
[post_ads_2]
Of course, there’s something in it for us, as well, aside from the millions pumped into our economy.

“Every independent coffee shop you recommend to us, every time you point us towards farmers market packed with the produce of hardworking local farmers, every incidence of dragging us away from generic tourist traps, you’re enriching Boston,” Riding said. “Visitors can be just as much a benefit as a bane, there’s a lot to be gained from a little hospitality.”

So, if you spot Sam in town sometime later this month, buy him a beer and ask him about Boston. He knows a lot about us. 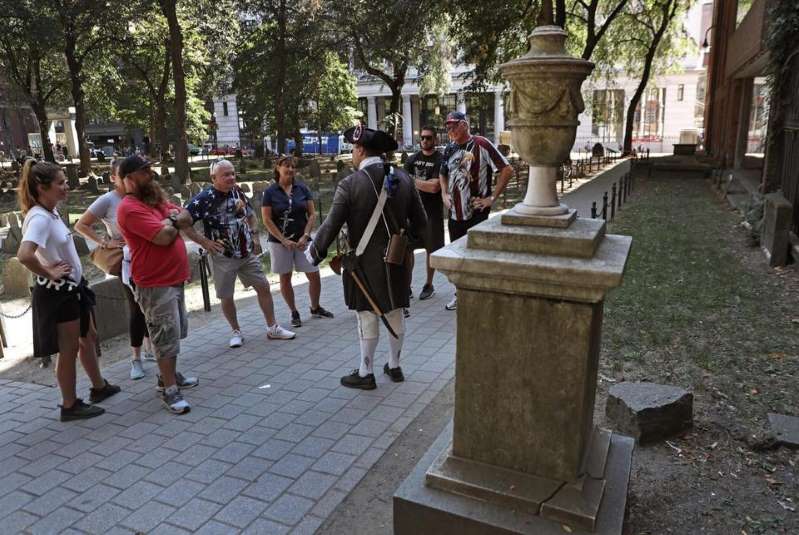