The first Mrs. Trump said she wishes the president's current wife "all the best." Inside Edition President Trump's first w...

The first Mrs. Trump said she wishes the president's current wife "all the best." 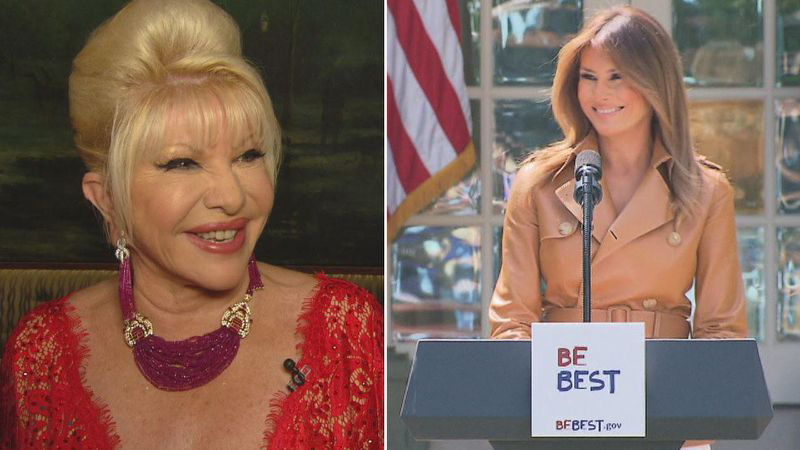 Inside Edition caught up with Ivana Wednesday at the launch of a new diet she's promoting. She said Melania has been on her mind.

Until last week, Melania had been absent from public view for 26 days, following a four-hour kidney operation last month.

On Thursday night, Melania and the president are reportedly having a private dinner to celebrate his 72nd birthday,

The president's favorite TV show, "Fox and Friends," sent him a birthday greeting, along with his son, Don Jr.

Daughter Ivanka posted a message on Twitter saying, "Happy, happy birthday dad! I love you very much. Wishing you your best year yet!!!"

The New York State Attorney General's Office marked the occasion by announcing a lawsuit against Trump and his three eldest children, Don Jr., Ivanka and Eric, for allegedly misusing funds raised by the Trump Foundation charity.

Fuming, the president hit back on Twitter, saying, "The sleazy New York Democrats... Are doing everything they can to sue me... I won't settle this case!”

Also Thursday, the Department of Justice released a scathing report that denounced fired FBI Director James Comey as "insubordinate" for the way he handled the Hillary Clinton email probe.

The report also revealed a 2016 text exchange between an FBI lawyer to her reputed lover, an FBI agent.

"No. No he won't. We'll stop it," her FBI boyfriend, Peter Strzok, responded.

On Thursday afternoon, Comey replied to the controversy on Twitter.

I respect the DOJ IG office, which is why I urged them to do this review. The conclusions are reasonable, even though I disagree with some. People of good faith can see an unprecedented situation differently. I pray no Director faces it again. Thanks to IG’s people for hard work.