This barber outlasted the flattop and the mullet. At 82, his clippers are still buzzing

By David Fowler's own reckoning, he has trimmed about 400,000 heads of hair at the Duke Barber Shop - a six-decade career that began with flattops, survived the meager "long-hair period" and ended on campus May 31, when the shop shut its fabled doors.

In his time, the 82-year-old barber has neatened up a long string of Duke notables: basketball star Danny Ferry, whose 6-foot-10 frame barely fit in the chair; "Good Morning America Host" David Hartman, who signed a picture from his days in a Blue Devil singing quartet; and former Gov. Terry Sanford, who chided Fowler for raising a Republican son.

In Fowler's last days at the shop, the clumps of hair on the floor around his chair are mostly white, a sign that his customers' loyalty dates back decades. And as they arrive for one last session under Fowler's razor, they lament the departure of their favorite barber and the shop that has kept the campus looking tidy for more than a century.

"I'm going to embarrass Dave, but Duke would be better off losing Mike Krzyzewski," said Jim Thames, a customer for the last 38 years, referring to Duke's longtime basketball coach.

With space at a premium, the university has other unspecified plans for the space Fowler leases in the basement of the Bryan Center. The shop has relocated several times since it opened in 1912, with Bryan Center its home since 2013.

When Fowler, a Smithfield native, arrived in 1959, fresh from the Durham Institute of Barbering, he could stand at Duke Chapel, look both ways and see the entire campus. Now, he muses, the whole of Duke isn't fully visible from a helicopter.

Fowler will snip on from his house in Hillsborough, hoping the faithful will follow him.

On his last day, he is booked from 6 in the morning until 7 at night.

"Everybody wants to be the last one," he said.

Few professions inspire greater devotion than car mechanics and barbers. How many people know a shoe salesman by name? Who has patronized the same car wash for more than five years, let alone 38?

Thames, his longtime customer, raves about Fowler cutting his father's hair while he was dying of diabetes, making a home visit to a man too sick to travel. Only bartenders know their patrons so well.

In an hour's time, Fowler will juggle a dozen conversation topics while shaving sideburns and straightening necklines, jumping from little league baseball to toe surgery.

As he dips a head into a sink bowl, he jokes, "I'm going to baptize you now. Duke water." And when he clips the final hair, he says, "See if that will be OK with Mama when you get home."

Adaptability kept him cutting for more than a half-century. Flattops ruled the '50s, but any barber in the Kennedy era had to learn the Ivy League cut or risk being square. Even greater challenges faced Fowler in 1969, a dark period for barbers that forced him to take a three-year hiatus from Duke and pick up new technique from his hairdresser wife.

"That was during the long-hair period," he said. "Statistically, we lost a lot of barbers."

It has experienced other milestones, when it hired the first black barber in 1969 and the first woman stylist in 1972, according to the shop's website.

The barbershop, sporting a working barber pole, isn't entirely a throwback. Its three barbers and two stylists offer perms. But Fowler rarely cuts new students' hair. He suspects they see his own snow-colored locks and move down the aisle to somebody whose scalp is still sprouting darker colors.

On the Friday before Memorial Day, Fowler finished his final customer at 7 p.m., long after most of the campus had fled for beach highways and backyard grilling. He mentioned that he had a banana sandwich waiting for him as the day's reward. And he noted that a rival barber in Columbia, 150 miles east of Raleigh, continues cutting hair at age 100.

He wouldn't mind matching that feat, though he recognizes the end arrives for everyone. He even imagines himself in the afterlife, still sought-after for his nimble hands.

"I just hope I don't have to cut hair when I get there," he joked. "Somebody might say Jesus' hair needs a little trim." 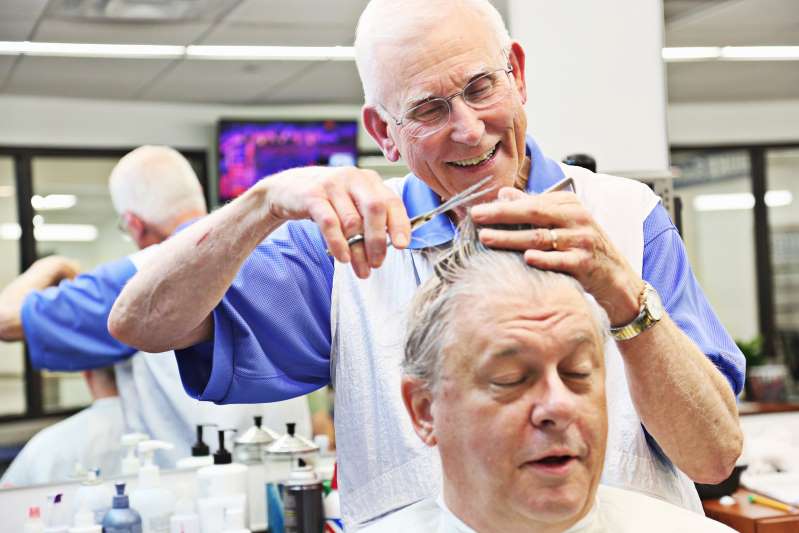