By David Moye , HuffPost A substitute teacher in Canada is being investigated for posting a photo on Instagram that smacks of “anti-black ra... 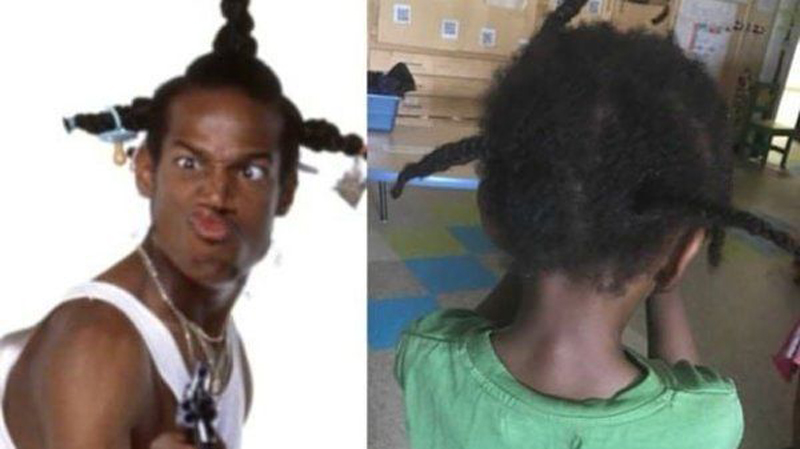 A substitute teacher in Canada is being investigated for posting a photo on Instagram that smacks of “anti-black racism,” school officials say.

The post appears to mock a young black student’s hair. It shows a picture of a small child in a classroom next to a picture of a character from the 1996 movie “Don’t Be a Menace to South Central While Drinking Your Juice in the Hood.” The character is brandishing a gun.

The post’s caption reads, “Who rocked it better? LOLOLOL.”

The Peel District School Board in Ontario said school officials became aware of the post after a concerned member of the community tweeted about it on Saturday.

Hi @PeelSchools, please be informed that a grade school teacher with your district is 1) openly mocking her students’ appearance and posting photos of them on social media 2) tagging the location of the school on her Instagram, putting them in danger. pic.twitter.com/Y3JNwz8EIf

This is not the kind of behaviour I expect from educators. This is so embarrassing and honestly fully racist. There are dozens, if not hundreds, of qualified teachers who are waiting for teaching positions, and this is who our children learn from?

The district has not released the name of the teacher who posted the picture, and the account responsible for the post has since been closed. The teacher will not be permitted to teach or to contact staff or students while the school conducts an investigation, according to the Brampton Guardian.

“We were made aware of an inappropriate Instagram post made by one of our staff members when it was sent to the Peel District School Board Twitter account yesterday,” district spokeswoman Carla Pereira said in a statement. “As the post shared is considered anti-black racism, we became concerned as this behavior is simply unacceptable.”

Pereira added: “We don’t yet know how long the investigation will take or what the outcome will be, as we’re just getting started, but want to assure our community that this matter is being taken very seriously by senior leadership of the Peel board.”

The teacher could face discipline ranging from a verbal reprimand to sensitivity training or even termination, according to Toronto City News.