Rush to save India bird with beak shut by plastic ring

The black-necked stork is a rare bird BBC Indian wildlife enthusiasts and forest officials have been trying to rescue a rare bird whose beak...

Indian wildlife enthusiasts and forest officials have been trying to rescue a rare bird whose beak has been trapped shut by a plastic ring.

The black-necked stork was first spotted with the ring around its beak in a wetland outside the capital Delhi by a group of bird watchers on 7 June.

They believe the bird can drink water but say the ring is preventing it from opening its beak further to eat.

Rescuers are hoping to catch it before it starves to death.

"It has to be weak enough so that it doesn't fly away but if it gets too weak it will die," Pankaj Gupta, a bird watcher and member of the Delhi Bird Foundation, who has been involved with the rescue mission, told the BBC.

Mr Gupta said the ring, which he thinks could be from a bottle cap, is likely to have slipped onto the stork's beak when it was hunting in the water and then got stuck there.

The stork was first photographed with the ring by Manoj Nair, another bird watcher, who sent the photo to Mr Gupta. Mr Gupta and his colleagues shared the photo widely, which led to a rescue mission being assembled.

Efforts to save the stork are being led by members of the Bombay Natural History Society, an organization that specialises in conservation, with help from local forest officials.

Mr Gupta, who had been in the field with the team until Monday, said they had first tried to build traps with nets but the stork had managed to fly away each time. So they have now decided to use nets made of bamboo and glue to catch it.

Black-necked stork, according to Mr Gupta, are classified as "near-threatened" and are native to parts of India, Indonesia and Sri Lanka. But only 50-60 of these birds are found in the marshy regions outside Delhi. They thrive in wetlands where they hunt fish and snails.

Although it was first seen in the Basai wetland, about 34 kilometers from Delhi, the rescue mission is under way in another wetland nearby, where the bird was spotted after that.

The Basai wetland has been in the news recently after bird watchers and local environmentalists challenged a government plan to build a factory there for recycling construction waste.

"The factory is good for the environment but why choose a wetland to build it?" Mr Gupta told the BBC.

The national environment tribunal will now decide if Basai should officially be recognized as a protected wetland.

Mr Gupta and his colleagues hope the plight of the stork will also help the cause of the wetland. 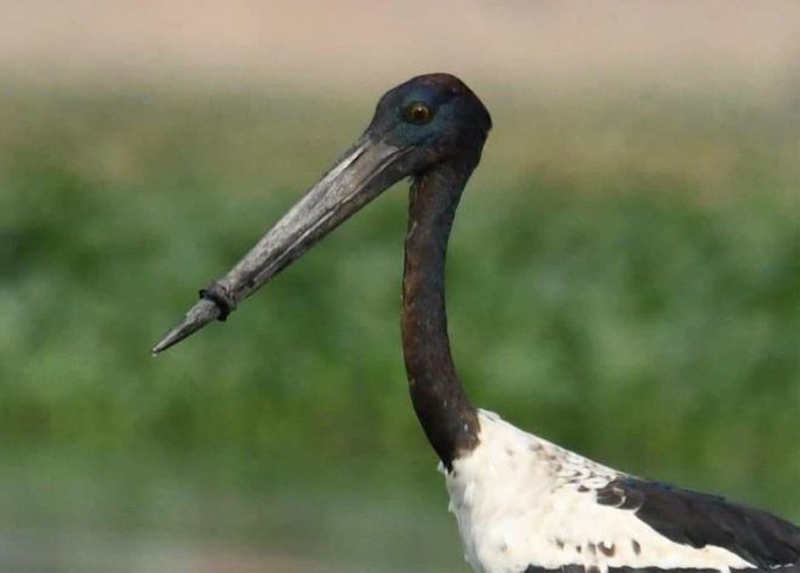