By Daily News Staff A pregnant cow from Bulgaria has been sentenced to death for "illegally" crossing the border into neighboring ... 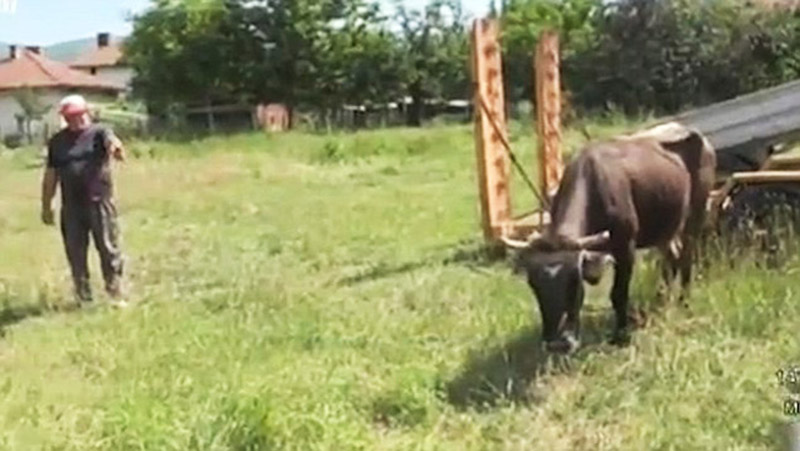 A pregnant cow from Bulgaria has been sentenced to death for "illegally" crossing the border into neighboring Serbia. She apparently didn't know that Serbia isn't a member of the European Union and could not return to her home country without the appropriate paperwork.

Penka the cow sealed her fate last month, when she broke away from her herd near the Bulgarian village of Kopilovtsi and crossed the border into Serbia, a non-EU country. The cow's owner, Ivan Haralampiev, and his sons relentlessly looked for her for two weeks, notifying border patrol, the local police and even the mayors of neighboring villages about her disappearance. Then, one day, Ivan received news that Penka had been located in the village of Bosilegrad, in Serbia, where it was being taken care of by the locals. The relieved owner went to retrieve his cow, but got some really bad news when trying to cross the border back into Bulgaria.

Despite the fact that a Serbian vet had checked Penka's health and cleared the animal for release, border authorities notified Haralampiev that, according to European Union legislation, the cow was going to have to be put down for entering Bulgaria from a non-EU country without proper import papers. They eventually let the man bring the cow back into the country with the stipulation that it would be put to death in a matter of days.

"She had left the borders of the EU' and cannot be imported back into the European Union," Ivan Haralampiev told Bulgarian television BNT TV. "A vet comes and orders it to be immediately culled!"

Bulgarian authorities don't care that Penka is due to give birth in about three weeks, or that she reportedly crossed the border into Serbia after her heard was chased by wolves. To them, all that matter is complying with EU legislation, which states that "certification must accompany the animals en route to the EU and when they are presented for entry into the EU at an approved EU Border Inspection Post". If it lacks that certification, the animal must be put down.

"It is not for us to decide. We are only implementing rules that come from Brussels," vet expert Lyubomir Lyubomirov told Bulgarian reporters.

Despite having been given a clean bill of health by a vet in Serbia, the law states that the animal must be put to death because it might be suffering from serious diseases and could infect local herds.

News of Penka's death sentence spread like wildfire, first on Bulgarian social media, and then all through Europe. Animal activists have now launched a petition to save Penka's life, and some politicians have also pleaded for leniency in this case.

"Surely this is a case where pragmatism should prevail over a strict reading of the rules," said Conservative MEP John Flack, who also wrote to Bulgarian prime minister Boyko Borissov, and to the president of the European Union, Antonio Tajani, about Penka.

Over 9,600 people had signed the petition to save Penka's life, at the time of this writing.
Watch the Video: