© New Jersey State Police via Facebook From New York Daily News A New Jersey state trooper had an unlikely reunion with the man who delivere...

A New Jersey state trooper had an unlikely reunion with the man who delivered him — he stopped him for a minor traffic infraction.

Trooper Michael Patterson stopped Matthew Bailly in Kingwood Township only to soon find out that the retired police officer was the one who brought him into the world on Oct. 5, 1991.

"We’re not sure what the odds are of this happening — maybe they’re close to the odds of a hole-in-one, winning the lottery, or being struck by lightning — but it happened," the state police wrote on Facebook on Thursday.

During the traffic stop, Bailly told the trooper that he was a retired police officer. Patterson told Bailly that he is from the same town, and Bailly responded by asking where the trooper used to live. Patterson would eventually figure out that Bailly was the one who came to the rescue nearly 27 years before.

"My name is Michael Patterson, sir. Thank you for delivering me," he told him.

Patterson's mother had been out shopping when she went into labor. She barely made it home, and a doctor on the phone helped talk Officer Bailly through the delivery.

"Needless to say, Trooper Patterson, Matthew Bailly, and both of their families were ecstatic about the reunion," the state police wrote.

Trooper Patterson and his mother visited the retired officer and his wife at their home. Their story has been shared on Facebook more than 7,000 times.

"We were over there for two hours, just catching up," Karen Patterson told the Asbury Park Press. "They were so sweet. We’re all going to keep in touch." 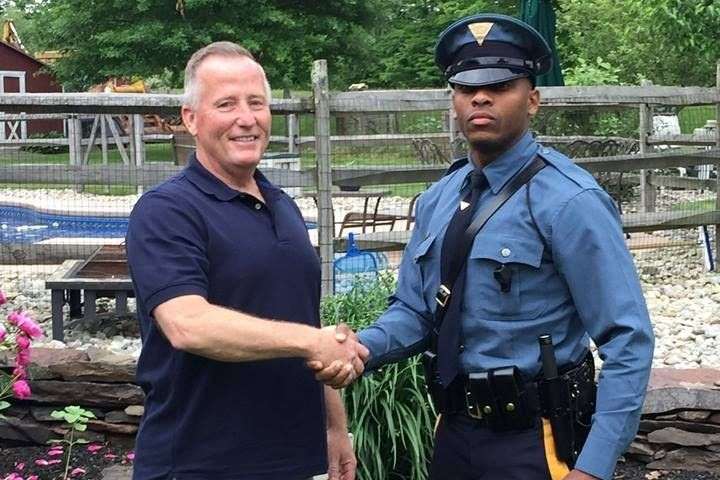