'It is Getting Hard for us to Breathe in Delhi': Why 1500 Delhi Residents Decided to Hug Trees

Residents, environmentalists and even children descended upon the peaceful neighborhood of Sarojini Nagar on Sunday, hugging trees and chant...

Residents, environmentalists and even children descended upon the peaceful neighborhood of Sarojini Nagar on Sunday, hugging trees and chanting anti-government slogans against the order to fell the trees.

Almost 1500 residents of Delhi took to the streets on Sunday Afternoon, braving the scorching June sun in a bid to save the trees of the city.

In what was a sample of Delhi’s own version of the Chipko movement, residents, environmentalists and even children descended upon the peaceful neighborhood of Sarojini Nagar.

Dressed in green, the protesters stuck out their angry placards and raised slogans against a recent order to fell at least 14000 trees in the capital.

The mass-felling is part of a project for the ‘redevelopment’ of South Delhi, aimed at creating more accommodation for central government employees.

The order has enraged many who feel that the it is unnecessary and in the case of Delhi, ‘suicidal’ for the government to cut trees from residential and market areas just to comfortably house VIPs.

“I don’t know how anyone in their right minds would pass this order. Delhi was unlivable this year. How can anyone even think of cutting that many trees? If this goes on, none of us will be able to breathe and all our babies will be born blue.” an elderly South Delhi resident, with her nose painted blue in protest, quipped.

Following the protests, the Delhi HC has decided to stay the order till July 2 and said that no trees will be cut in Delhi in the interim.

The HC was acting upon a plea filed by KK Mishra, who cited a CAG report to question the decision to cut trees to make housing space. According to Mishra, the CAG report states that Delhi has a deficit of 9 lakh trees.

Recognising the petitioner as well as the rest of the protesters’ concerns, the HC asked the National Buildings Construction Corporation (NBCC), involved in the redevelopment project, whether Delhi could afford to cut trees to make houses.

The order, which was allegedly passed with approval from both state and Centre, has been challenged by the Aam Admi Party who have blamed the Centre and the Delhi LG Anil Baijal for passing the order.

Responding to Environment Minister Harsh Vardhan’s statement that the order had been passed post approval from Delhi government, AAP leader Ankit Lal said that Harsh Vardhan was under delusions.

“Blames can be put on anybody. It seems that Environment Minister is under the delusion that the LG is the entire Delhi government “ said Ankit Lal.

Lal was attending the protest in a non-political capacity along with his wife Prerna Prasad, who was one of the organisers of the event.

Lal, however, confirmed that the LG had in fact given a nod to the proposed deforestation.

The issue of the mass felling has been hotly contested on Twitter where AAP MLA Saurabh Bhardwaj slammed the Environment Minister Harsh Vardhan as well as Housing and Urban Affairs Minister Hardeep Singh Puri for their alleged ‘apathy’ in the issue.

However, while the legislative and executive bodies continued the familiar blame-game, it was the people of Delhi who put the pedal to the metal, forcing the HC to take notice.

“This protest was organized to establish the environmental movement in Delhi. Many of us do our bits for the environment. But it is time to stop working in silos and come out as ajoint force against anti-environmental policies and orders such as this. The only way we can make a change is if we do it together,” Prerna Prasad, dressed in the protest’s trademark parrot green colour, told the crowd.

The NBCC’s proposal to plant double the number of trees for every tree razed (and the Environment Minister’s assurance on Twitter for the same) have failed to woo Delhiites.

“Even if the government plans 10 trees for every tree that it is cutting, how are they going to meet the immediate deficit? A sapling takes 10 years to grow into a full tree. The compensation offered is absurd,” a volunteer from Green Circle, a local environmental NGO, said.

According to social activist Chhavi Methi, the government needs to find better solutions to problems such as housing crunch.

“The trees that are facing death are all over 100 years old. Even the younger ones in the are at least 7—8-0 years old. Redevelopment projects need to be allocated in dry areas with sparse tree cover,” Chhavi, who works for the Art of Living Foundation, said.

“South Delhi is one of the few parts of the city that still has some green cover and beauty. The order will destroy even the last green bastion of the city,” she said.

While Sunday’s protest was informally initiated by AAP, the protest had the makings of a true people’s movement, reminiscent of the original Chipko Movement which is so deeply entrenched in the Indian environmentalist’s psyche.

It saw participation from a diverse set of people, mostly concerned residents and environmentalists, who came out to hug trees in a symbolic move to save Delhi.

But as 11-year-old Anindya, a student of Amity International School and one of the youngest protesters put it, the struggle has just begun.

“It is getting hard for us to breathe in Delhi. The summers have become hotter, dust storms are killing people. Trees can give us life as they suck in pollution. If we cut life giving trees, we will all have to carry our own oxygen cylinders to breathe,” the young tree-hugger said. 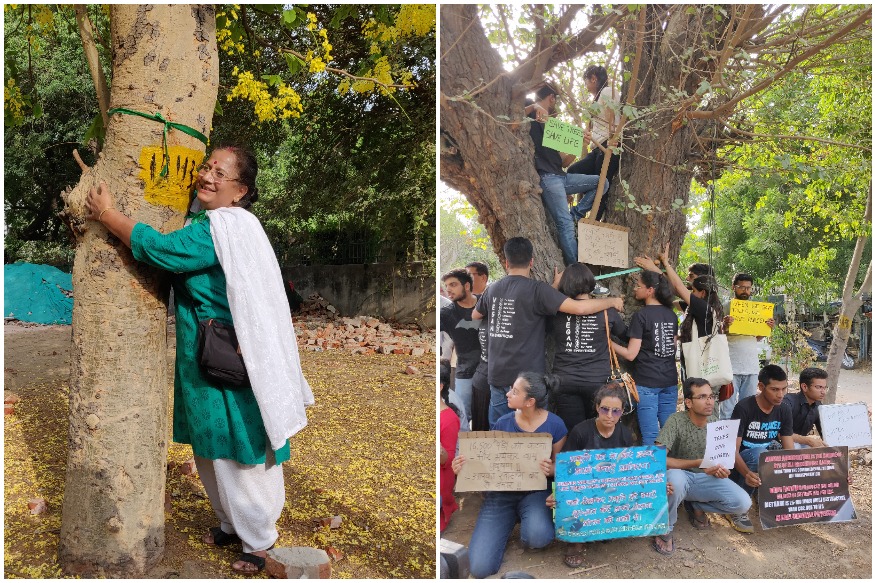