He wrote an obituary about — wait for it — a duck. Here's why you should give a quack

© Courtesy William Linville/Biloxi Sun Herald/TNS Bonnie the duck was a popular resident of Hiller Park in Biloxi. The crested duck… By Ta...

Bonnie "the goodtime duck" waddled her way into the hearts of William "Andy" Linville and his granddaughter, Hailey Hickerson, during their regular trips to Hiller Park in Biloxi.

Well, they assume Bonnie was a girl. This duck could have been a guy. They're not sure.

What they do know is that the duck with the funny tuft is no longer with us. Bonnie has gone to a duck pond in the beyond. And Linville was moved to write an obituary for the duck who brought so much joy to him and Hailey.

"With a saddened heart I am reporting the passing of Bonnie 'the goodtime duck' of Hiller Park," Linville wrote. "Bonnie was known by many bread throwers because of the fashionable feather bun worn on the top of her/his head. Bonnie was thought to be a female because of her high-fashion hairdos, but male mating tendencies describe him as being male."

Bonnie was a crested duck, so called because of the powder puff of feathers, and a mutation causes the crest. The confusion about Bonnie's gender began when Linville saw the duck behaving uncharacteristically during mating season.

"During mating season, she, or he, would beat up on a mallard," he said. "So I really don't know what was going on. It wasn't like Bonnie to do that."

Visiting the ducks in the park on a regular basis has been a longtime treat for Linville and his granddaughter.

"We've been going out there probably eight years," he said. "One year, we started noticing there was a different one. My granddaughter had started naming them. There was this one with a bun on its head, and she wears her hair in a bun, so we started looking for that duck every time. We'd call out for her, and she began recognizing her name. We'd holler, and she'd start running for the van."

Hailey noticed that she and Bonnie often had similar hair days.

"My granddaughter would be having a bad hair day, and she'd see that Bonnie's feathers were fuzzy that day. Or another day they would be slicked back like she had been in the water," Linville said.

"Bonnie was retired, unable to fly, but a fast runner," Linville wrote. "Bonnie was smart, always coming in close from behind to get that bread and avoid those agonizing seagulls."

Bonnie was both friendly and shy.

"She'd eat right next to your feet, and she'd look at you, directly in the eyes," Linville said. "But she wouldn't take it from your hand. She would approach with caution."

"Bonnie is survived by her closest friend, Copper, who looks just like Bonnie without the bun on top. Bonnie and Copper were always together, and Black Duck was always close behind. Pickles, the big white goose and his sidekick, The Old Gray Goose, were close acquaintances.

"Bonnie did not like the mallard and would chase him down and try to drown him, but the mallard stayed between the two fat white ducks for protection," he wrote. "The pack of ugly ducks were longtime friends of Bonnie. However, the Canada geese won't have to compete with Bonnie for food. It was like playing Duck, Duck, Goose when the Canadians were in town."

Copper, Linville said, has been a little lonely since Bonnie's passing.

Copper is just waddling around behind the two black ducks now," he said.

"Bonnie will truly be missed by many. He/she was a good duck, and Hiller Park just isn't the same without Bonnie," Linville wrote. "Hopefully the good Lord has a rainbow bridge for ducks, with beautiful ponds and green meadows. We will always remember Bonnie." 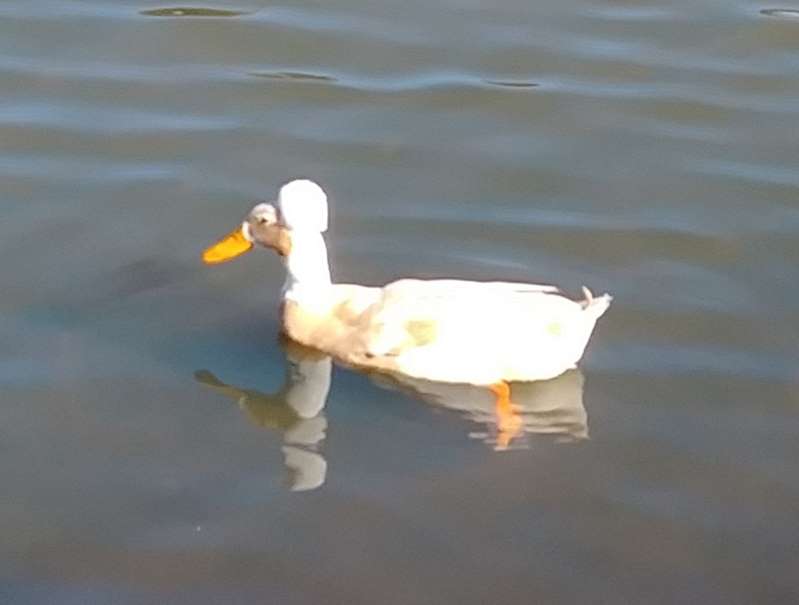