Four siblings raised in poverty by a single mother 'beat all the odds,' earn master's degrees

In late 1983, on the day after Christmas, Cynthia Gil's father left her family's Portage, Ill., home to run an errand. He never returned.

"We had no idea what happened to him," added her big sister, Mary Gil-Guerrero, who was 11.

Their father eventually separated from their mother and moved to the Indiana Harbor section of East Chicago. Their mother struggled for several years as a single parent with two preteen daughters and two toddler sons, still in diapers, they said.

"It was tough for her, with four kids and no career or higher education," Gil-Guerrero said.

It also was tough on the two sisters, who stuck together during the difficult times.

They remember walking to the corner store with their little brothers in tow, with just enough food stamps for a few necessities and some penny candy.

"We were on welfare, and we knew exactly what poverty felt like," Gil said.

The sisters also recall coming home from school one day and finding all their belongings on the front lawn.

"That was our reality back then," Gil-Guerrero added. "But my mother did whatever she could to keep a roof over our heads."

They both vividly recall when their mother's boyfriend at the time refused to drive the family to a roller skating rink for a night of fun. Their mother had to walk there with all four kids in tow.

"She was stuck," Gil said. "And I told myself back then that I never wanted to be stuck like that."

Her sister added, "I also told myself that I would never ask a man for money or if I could use his car."

The girls attended six elementary schools and three junior high schools before getting into high school.

When the girls were 12 and 14, their mother was overwhelmed with it all. She took them to their father's home in East Chicago, where they would live for a while.

"It was a basement apartment with one bedroom, a tiny bathroom with no shower, and roaches everywhere," Gil said.

"We called it the dungeon," Gil-Guerrero said.

They had to transfer schools, yet again.

"If you're familiar with the area, you know the streets are dangerous and the public education is questionable," Gil said.
Despite all this, the sisters remembered what their grandfather insisted to them again and again. They must attend college and earn a degree, becoming the first in their family to do so, he told them.

"Even though he never told us how to pay for it or how to pull it off," Gil joked.

Along the way, they started their own families while juggling full-time jobs and similar struggles as their mother, though never in such poverty.

"It was tough at times," said Gil, who's now 42 and lives in a beautiful home in Schererville, Ind.

"There were times when we weren't sure if we would get through it," said Gil-Guerrero, 45, of Crown Point, Ind.

I met with the sisters at Gil's home when I learned that they both not only overcame the odds against them as teenage girls, but they also went on to eventually earn a master's degree at the same school, Indiana Wesleyan University in Merrillville.

Their little brothers, Daniel and Richard Gil, also followed in their steps to attend Purdue University, earning degrees as constructional engineers before also earning MBA degrees at Indiana Wesleyan University. One brother lives in Whiting, Ind., the other in Highland, Ind. Both work in Chicago.

"My brothers are amazing husbands and awesome fathers, despite not having a positive male role model in their lives," said Cynthia Gil, a mother of two who works as an English teacher at the Excel Center in Hammond, Ind.

"We were four kids, all raised by a single mother on government assistance, yet we beat all the odds," said Gil-Guerrero, a mother of three who oversees a chain of dialysis clinics across Northwest Indiana for American Renal Associates.

For a graduate presentation last year at Indiana Wesleyan University, Gil spoke about situational and generational poverty, as part of her 65-page thesis on poverty and immigration, including her own personal experiences.

The university's dean of students, Jenny McGill, was in the audience.

"It was all facts," Gil replied.

McGill asked, "You have three siblings who also have an M.B.A. from IWU, and you all grew up with that type of dysfunctionality?"

McGill said she was astonished by the siblings' grit and determination. So much so that she encouraged the siblings to share their story publicly as part of the university's "Shine Bright" campaign. The siblings shot a commercial for IWU discussing their degrees and their family's commitment to each other, and to higher education.

"We decided as kids that we would fight for a brighter, better future," Gil said in the commercial.

"Together, we set expectations, and together we persevered," Gil-Guerrero said, noting that her parents are still part of her life.

Every school day, Gil drives her 16-year-old daughter to Bishop Noll Institute in Hammond. During the long, tedious trip, Gil often shares with her the same message she was told by her grandfather. College is a certainty, not an option.

"She doesn't have the same struggles that I had as a teenage girl, but I try to make her understand the value of education," Gil said. "I expect her to get straight A's, and she does. Too many times we second guess ourselves because we think it's impossible, when really it means that I'm possible." 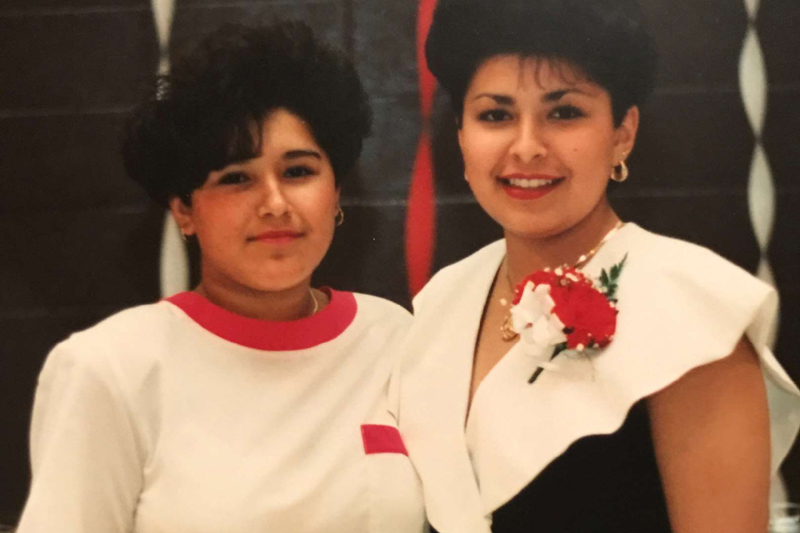