At 80, ironworker who has dangled atop Chicago's tallest skyscrapers is still climbing

© Zbigniew Bzdak/Chicago Tribune/TNS John Rukavina, 80, visits Marina Towers in Chicago on Friday May 25, 2018. He has worked atop… By Pat...

The ironworkers clambered onto the Willis Tower roof, 1,450 feet above the city.

Then they climbed higher. The mission: Complete the installation of one of the skyscraper's massive antennas, another 290 feet skyward.

John Rukavina, hard hat strapped to his head and trusty Red Wing boots protecting his feet, grasped the bars of the ladder attached to the towering antenna, glanced upward and headed for the top.

Dangling more than 110 stories above the Loop is second nature for Rukavina. He has done it for decades. Now 80 years old, Rukavina has toiled at the top - the real, actual outside-in-the-clouds, highest-point-possible top - of the tallest skyscrapers in Chicago's famous skyline.

"It's safer to be on that antenna," Rukavina said, "than it is to jaywalk on LaSalle Street at noon."

Rukavina is semiretired now but will climb on high-profile jobs that pique his interest. A recent offer to work on the Willis Tower fit the bill. So on March 18 Rukavina readied his gear and his body for another day high above the city.

The ascension to the pinnacle of the Willis Tower was a long-awaited reunion with an old friend. Rukavina worked on the installation of the skyscraper's original antennas in the 1970s, back when it was known as the Sears Tower, then the world's tallest building. He helped triumphantly unfurl an American flag on top of the new building, clinging to the antenna like a kid on the playground.

"When you're looking down on all of it," he said, "it's just beautiful."

So when the offer to work the Willis Tower antenna installation arrived, he jumped at the chance.

Rukavina, still fit and nimble, hung from the top of the giant metal damper, working with other crew members, including his nephew Bob East, to guide the final piece into place. With a helicopter hovering above them, dangling the final component, Rukavina and the crew aligned, then bolted the damper.

"Life is boring," he said. "You gotta have something to do."

Rush to the sky

Construction crews dot the skyline these days. Chicago is in the midst of a high-rise building boom, cranes hovering above the Loop, new residential and office towers soaring. Several other super-tall skyscrapers have been proposed, including one at the Tribune Tower site, which would be the city's second-tallest, and the former Spire site, perhaps giving Rukavina a chance to expand his portfolio.

Ironworkers, who install the steel columns and beams, rebar and cable systems of apartment, condo and office towers, are an essential part of the projects. There are 45 ironworkers at the 98-story Vista Tower at 401 E. Wacker Drive, about 20 each at a pair of 50-story projects on Michigan Avenue in the South Loop, more at a project in River North and another 20 on the rehab at Willis Tower, according to Matt Austin, the Iron Workers Local 1 business agent in charge of the Loop.

Commercial and multifamily construction starts in Chicago were valued at $8.6 billion in 2016, the most since at least 2000, although they slowed in the first half of last year, according to Dodge Data & Analytics.

Rukavina was there for the city's last such rush to the sky. He worked on the construction of the Marina City towers in the 1960s and hung the flag on a John Hancock Center antenna in conjunction with a Michigan Avenue parade celebrating the moon landing in 1969.

There's Rukavina, in a photo on the front page of the Tribune on Dec. 15, 1973, atop the Sears Tower. There he is again in a 1978 picture, swinging a hammer as he balances from an antenna on Marina City. More recently, in 2009, he capped the spire on Chicago's Trump International Hotel & Tower.

"I love it," he said about Chicago's skyline. "All the memories come back. All the guys up there working, all those good times we had. Sometimes, I even feel like they belong to me, like those are my towers."

His love for buildings, construction and skyscrapers, Rukavina surmises, originated from a childhood love of Tinkertoys.

"You need to be someone who can get up there and get the job done. People who are agile, in good condition, that's what it's all about," Rukavina said. "It's not for everyone."

Working on the edge

To someone who doesn't hang off tall buildings for a living, Rukavina's feats seem almost unreal. But to Rukavina, it's like eating a bowl of oatmeal. Perching on a slender steel beam with nothing but the city streets far below him simply became a reality of the job.

Rukavina said he never felt comfortable in an office and came to enjoy the physical, often dangerous nature of iron work. He says he feeds off the adrenaline of working high in the sky.

Philip Rosenbach, Rukavina's friend since age 12 and a retired ironworker, said his friend is an opinionated, dedicated leader who loves jobs on the city's tallest buildings.

It's no accident that Rukavina is still doing what he loves. He has helped build the city's most prominent buildings through a mix of fearlessness and, this being Chicago, personal and political connections. His family owned a popular south suburban restaurant. His mentor was Peter Vrydolyak, brother of Ed, an influential longtime union trustee and city official who, like his sibling, ran afoul of the law.

Rukavina grew up on the South Side of Chicago, near 89th Street and Buffalo Avenue, attended Bowen and Chicago Vocational high schools. He went to work in the steel mills and then the railroads, but said he decided, "This is not my bag, I need something a little more exciting."

He joined the ironworkers apprenticeship program and was initiated in Iron Workers Local 1 in 1957.

No room for error

Rukavina eventually worked his way up to a supervisory role and angled for the top jobs. Then he worked 23 years for the city, including as director of structural and architectural inspection.

Rukavina was a full-time ironworker and crew chief, when no one "tied off" or wore a harness. Rukavina said he wouldn't hire someone who wanted to wear a safety belt because it slowed the person down.

"They'd put you in jail if you did that today, but that's the way we worked," he said.

Despite displaying a confidence and steeliness, Rukavina said the job had plenty of tense moments. When he hung the flag on the Hancock to celebrate the moon landing, he said a gust of wind nearly toppled the antenna. A job in Texas was ravaged by a hurricane. And he lost the tip of his left thumb during the construction of Marina City.

"There wasn't a day that I went to work that I didn't think I was going to fall," he said. "You can be afraid, but you better not tell nobody because they could care less."

Working at Marina City, he got to meet the building's architect, Bertrand Goldberg.

"He said, 'We can draw it and design it, but we need you to build it,' and that was a compliment," Rukavina said.

While welding and bolting atop soaring structures was often perilous, the crews found plenty of time to swap stories and jokes, Rosenbach said, and Rukavina was often at the center of it.

During work on the John Hancock building antenna in the early 1980s, Rukavina once set up a grill on the roof, said Rosenbach, who was a member of the team on the job. He collected $5 from every member of his crew and grilled steaks high above the city. One of the job site supervisors arrived and was incredulous, Rosenbach recalled - "What are you guys doing?" he said. Rukavina offered him a steak.

Rukavina never married and has no children. He lives with his longtime girlfriend, Karen, in a sprawling home in Rolling Prairie, Ind. Basement walls are covered with photos and posters of him on skyscrapers or hanging on beams high in the air.

"I don't think there's a building that can compare in terms of quality," Rukavina said.

When he's not climbing the antenna on one of the world's tallest skyscrapers, Rukavina often can be found climbing trees in the backyard of his lakeside home, mowing the lawn or hosting a party for friends.

Rukavina considers himself a consultant and he's still an active member of Iron Workers Local 1 - "the best ironworkers around," he says, more than once. Local 1 President Craig Satalic said Rukavina, even at 80, is not among the top 10 oldest active union members.

That Rukavina recently worked on the Willis Tower antenna does not surprise his friend Rosenbach.

"Take one look at him, he's an ageless wonder," Rosenbach said. "John always kept himself in shape mentally and physically, especially mentally."

He stays in shape by using the personal workout machine in his basement, pushing himself to complete a round of exercises before heading upstairs. He said he doesn't think much about his age.

Then to prove he still has it, he crouches into a coil at the foot of the stairs, bursting up like a spring to leap two steps at a time. 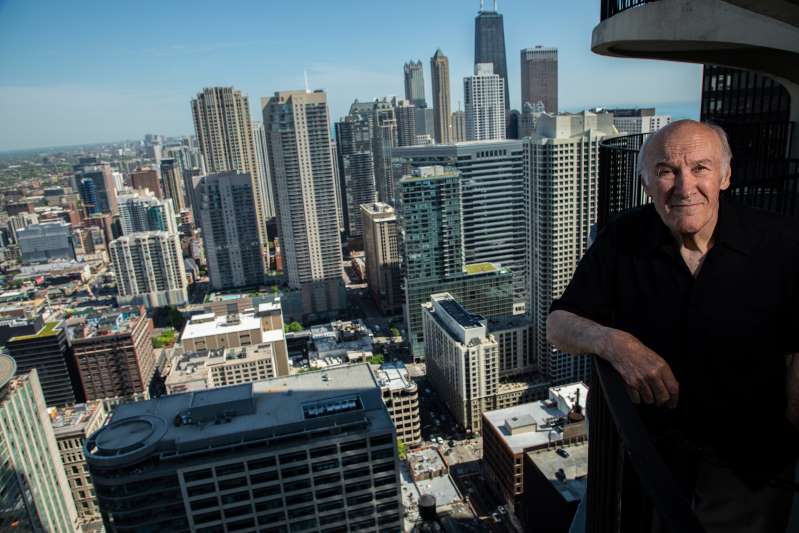