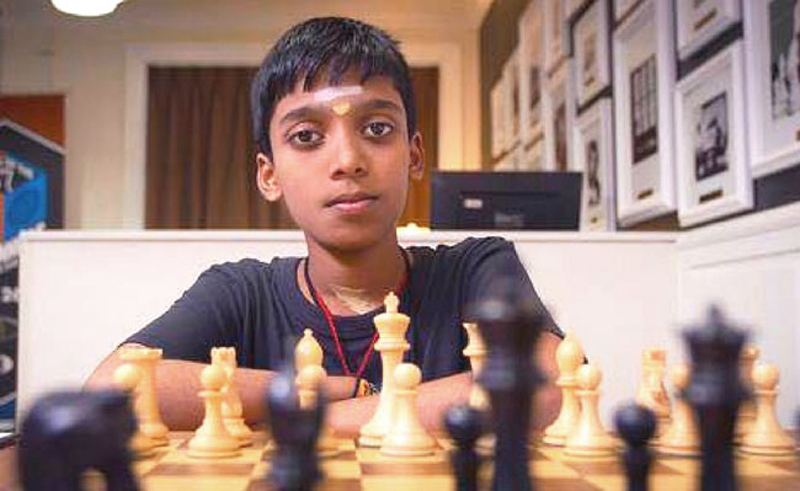 India's R Praggnanandhaa has become the country's youngest and the world's second youngest Grand Master at the age of 12 years, 10 months and 13 days after reaching the final round of the ongoing Grendine Open in Italy.

The Chennai-based player was paired with Grand Master Prujjsers Roland in the final round, which ensured that he would achieve the feat. After beating GM Moroni Lica Jr in the eighth round, he needed to play an opponent above rating of 2482 in the next round to make his third GM norm.

Ukraine's Serget Karjakin remains the youngest ever GM, having achieved the feat at the age of 12 years and seven months in 2002.

In 2016, Praggnanandhaa became the youngest International Master at the age of 10 years, 10 months and 19 days.

"Welcome to the club & congrats Praggnanandhaa!! See u soon in chennai," he tweeted.

Meanwhile, Pragga's coach R B Ramesh described it as a fantastic achievement.

"Fantastic achievement of course. Feeling proud that one of my students could achieve this. It was a collective effort from parents, who stood by him in tough times, sponsors Ramco group, ONGC and his school," he told PTI.

"BIG Relief! Congratulations @rpragchess . Great inspiration personally working with you! He travels an hour each way to attend lessons. Great commitment from the parents. Thanks to sponsors Ramco and Mr. Venkaraman Raja too!," he also tweeted.

Ramesh said Praggnanandhaa had the chance to break Karjakin's record last year and did come close to making the GM norms but missed out narrowly in the end.

"Last year, Praggna has come close to making the GM title but now that it has been achieved, we are all very happy. He can only get better from here," said Ramesh, whose movement is hindered by polio.

He also said there would be greater expectations from the youngster now that he has become a GM. "Pressure is something every sportsman should learn to live with, can't complain about that," he added.

Praggnanandhaa's father A Ramesh Babu said he was overjoyed with Pragga's achievement.

"I am overjoyed. He has put in a lot of hard work. Credit goes to my wife, who accompanies him to tournament and is very supportive. Due must be given to coach (Ramesh sir)," he added.

Praggnanandhaa's sister Vaishali is also a WIM and has won the world under-14 and 12 titles previously.

Meanwhile, V Kameswaran, India's first international arbiter, said Praggnanandhaa had developed consistently and a bright future lies ahead of him.

"Becoming India's first youngest and world's second youngest GM is not all of a sudden. Though he missed becoming the World's youngest GM, his relentless chess pursuits for high honours are simply outstanding. The credit definitely goes to his parents, sister Vaishali and coach GM R B Ramesh," he said.