A future astronaut, a daughter healing from loss win top honors from Library of Congress

© Moe Zoyari/Chicago Tribune/TNS Akosua Haynes poses in front of their house in Hyde Park on Wednesday, May 30, 2018, in Chicago, Ill. Ha...

Rylee Paige Johnson, 13, wrote a letter to Gabrielle Zevin, author of "Elsewhere," thanking Zevin for helping her heal after the sudden death of her mother.

The letters - each a thing of beauty - were part of a Library of Congress writing contest that invites fourth- through 12th-graders to write to authors and let them know the impact of their work. Close to 47,000 students from across the United States entered this year's contest, which began a quarter-century ago.

Their letters are night and day - one born of sorrow, the other born of joy. But they share an authenticity and richness that speaks to the ability of books to guide us through life's various triumphs and travails.

"One night my siblings and parents were in the living room watching our favorite show," Rylee wrote to Zevin. "A commercial came on so I got up to make cookies in the kitchen. Then my oldest sister, Sydney, started whispering, 'Mom? Mom?' No answer. I looked over to see my dad standing over a shaking body. 'I'm calling 911!' She had had an aneurysm and wasn't waking up. I spent those few days in that hospital room listing all the things I did wrong and what I would change once she woke up. She never did."

In "Elsewhere," 15-year-old Liz ends up in an Earth-like place called Elsewhere after being hit and killed by a taxi. From there, she watches the world she used to inhabit.

"Liz tortured herself by going to the observation decks to see her old life every day," Rylee wrote. "She sat there watching her best friend being happy without her. She watched everyone move on. Everyone except Liz. I didn't want that to happen to me. I didn't want to become a ghost person living in the past."

Rylee said the letter to Zevin was the first time she'd written at length about losing her mom, who passed away in December 2016.

"Last year, I wrote some poems and random paragraphs, but not anything like a full piece of writing," she told me last week. "I don't think I was ready before to put it down on paper because things are so much more real when you put them on paper."

In her letter, Rylee told Zevin that "Elsewhere's" theme of acceptance really struck her.

"Liz took some time learning how to move on from the life she used to know," she wrote. "She was stuck. Thandi, her roommate, had no problem at all. From the start she said there was no point being sad at what she couldn't change. I read that, wishing my heart could catch up like Thandi's did in two pages. But everyone takes their own time to keep their mind and soul in sync. Knowing that my mom wasn't coming back home was difficult to even imagine. I had to accept that life would go on without her, but only if I moved on.

"I wanted to live my life and not wait for it to be over," Rylee wrote. "Thank you for a world where my own mother can see me writing this letter from an observation deck. Thank you for the idea that once I leave this world, I will return. Thank you for the lessons I couldn't live without, and the book I won't forget."

I asked Rylee if she wants to pursue writing long term. She certainly has a gift.

"I would love to have a career in literature," she said. "It felt really good to tell my story, so that other people could read it and maybe be inspired or just feel better about their own losses in life."

Akosua has known her life's calling since she was 4 years old.

"I've dressed up like an astronaut for at least four Halloweens now," she told me. "I really want to be an astrobotanist. They study plants in space, and if we do go to Mars, which we probably will, I want to be able to grow my own food in space and not just eat frozen things."

Akosua and her parents traveled to southern Illinois to watch the solar eclipse in August 2017, and she finished reading "Hidden Figures" on the drive back.

"When the moon had completely covered the sun, I looked up and wondered how Katherine Johnson felt when she helped John Glenn orbit the Earth," Akosua wrote to Shetterly.

"I invited four of my friends and we played a game with little Lego pieces, and answered questions about planets and asteroids," she told me. "Everybody had to read the book, period. You had to be two-thirds done with the book, or you just couldn't come."

She told Shetterly all about it.

"I wanted them to read your book to see the magic in math and how useful it can be," she wrote in her letter. "Right before my party I looked up the definition for analytic geometry because Katherine used it to calculate the trajectory of John Glenn's Mercury capsule - useful magic!"

"Although John Glenn respected Katherine Johnson," Rylee continued, "they lived in two different worlds. When I read about the discrimination that Katherine and the computers had to put up with (people not trusting them, separate bathrooms), it made me think what it would have been like to live in the Jim Crow time period. I asked myself if I would have been able to work so well under pressure. I felt proud of Ms. Johnson."

The Library of Congress doesn't send the letters to the authors. The point is to mull and articulate the power of a story, and some of the contest participants choose authors who are no longer living.

Still, Akosua's hoping her letter makes its way to Shetterly.

"I really want her to know how much her book inspired me and how it has really motivated me to push my math skills to a much higher level," she said. "I have a little STEM program on Saturdays, and we've been learning about propulsion, and we've been reviewing decimals and coordinate planes, and I'm trying to make myself more like Katherine Johnson every day."

You can read all of the winning letters on the Library of Congress website.

I hope the stars and planets align for Zevin and Shetterly to see Rylee and Akosua's letters. But even if they don't, I'm grateful the letters exist - floating around the universe, making the world a better place, as only beautiful words can. 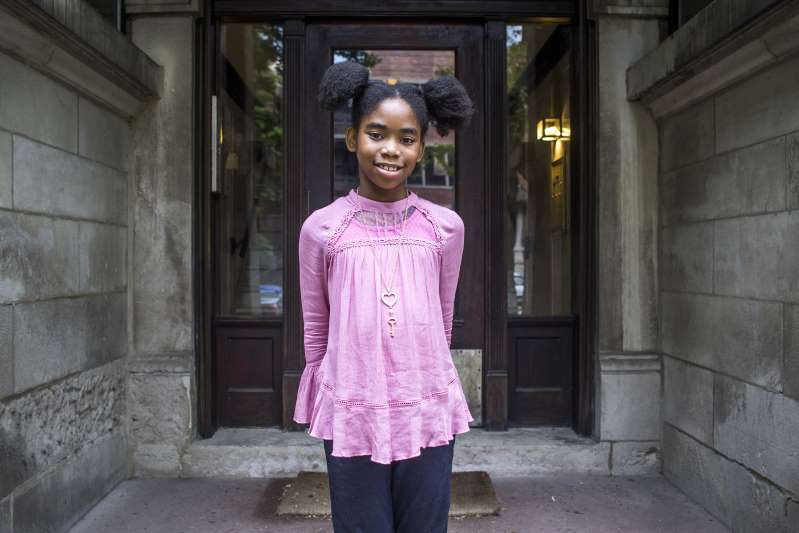