14 boys, no regrets: Michigan family happy the way they are

© The Associated Press In a photo from May 30, 2018, the Schwandt family poses for a photo at their farm in Lakeview, Mich. Standing from...

A Michigan couple have 14 boys.

And no regrets — regardless of what online opinion-givers have to say about it.

"There are some really mean people in the world. And it doesn't matter," said Jay Schwandt, the father of the boy brood. "We happen to be this great big family with 14 boys that has so much fun every second that we're together. And we still get horrible comments."

Some comments focus on whether Schwandt and his wife, Kateri, 43, are capable of giving each child enough attention, a criticism their fourth son, Brandon, dismisses.

"It's just what we grew up with. I don't know how to explain it. It's just life. It's our life," said Brandon Schwandt, a 19-year-old hockey standout who recently signed to play with a junior team in Florida.

Brandon's mom describes life at home in the Grand Rapids suburb of Rockford as "organized chaos." While his dad, a 44-year-old lawyer and owner of a land surveying business, sees it this way: "Crazy. Chaotic. Noisy. Messy. But, we enjoy it. If we didn't, we wouldn't have continued to have this many children."

High school sweethearts Jay and Kateri Schwandt had three children while they were students at Ferris State University, starting with Tyler, their oldest, who now is 25. The newest Schwandt, Finley Sheboygan, entered the world in April.

The newborn's middle name is inspired by a tale Kateri's dad — himself the father of 14 — tells about an American Indian chief who was the father of many boys. The chief believed his last child would be a girl, but when the baby was a boy, the chief named him Sheboygan. As in "she is a boy again."

"So, we decided to have a little fun with it," Kateri Schwandt said. "He's got a lot of brothers standing behind him, so if anybody wants to make fun of his name they can try."

Mom, dad, all 14 boys, and several of the older ones' girlfriends recently met up at the family farm in rural Lakeview, where they crowded around the table to enjoy dinner supplied by members of their church before scattering.

Gabe, 11, took off for a spin around the 200-acre property atop a four-wheel ATV. Francisco, 3, lounged on the carpet, watching cartoons on a flat-screen TV. Drew, 21, battled Brandon in a game of 8-ball while 6-year-old Luke looked on. The most popular activity was hugging, kissing, or holding baby Finley, which it seems just about every Schwandt did at one point or another.

"I have said, steadfastly, that we are done having children," Jay Schwandt said. "But I have been reminded that I said the exact same thing after Tucker (who's now 4). And after Francisco. It just feels like we're done."

There may or may not be a 15th child in the Schwandts' future, but a first grandchild is nearly here.

Drew and his girlfriend, Anelene Mellin, are expecting — a girl.

"I'm really excited about it," said Mellin, a student at Central Michigan University. "She'll be extremely loved and probably spoiled."

Her due date is Friday. 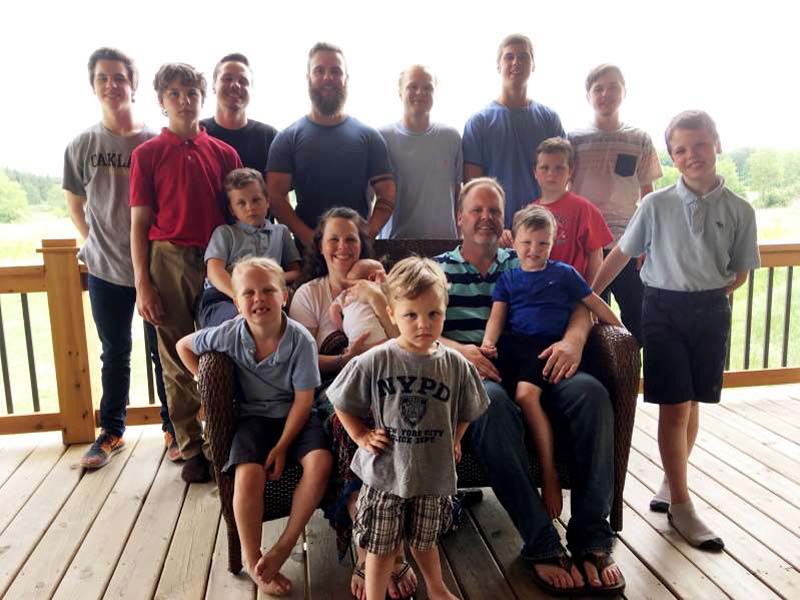